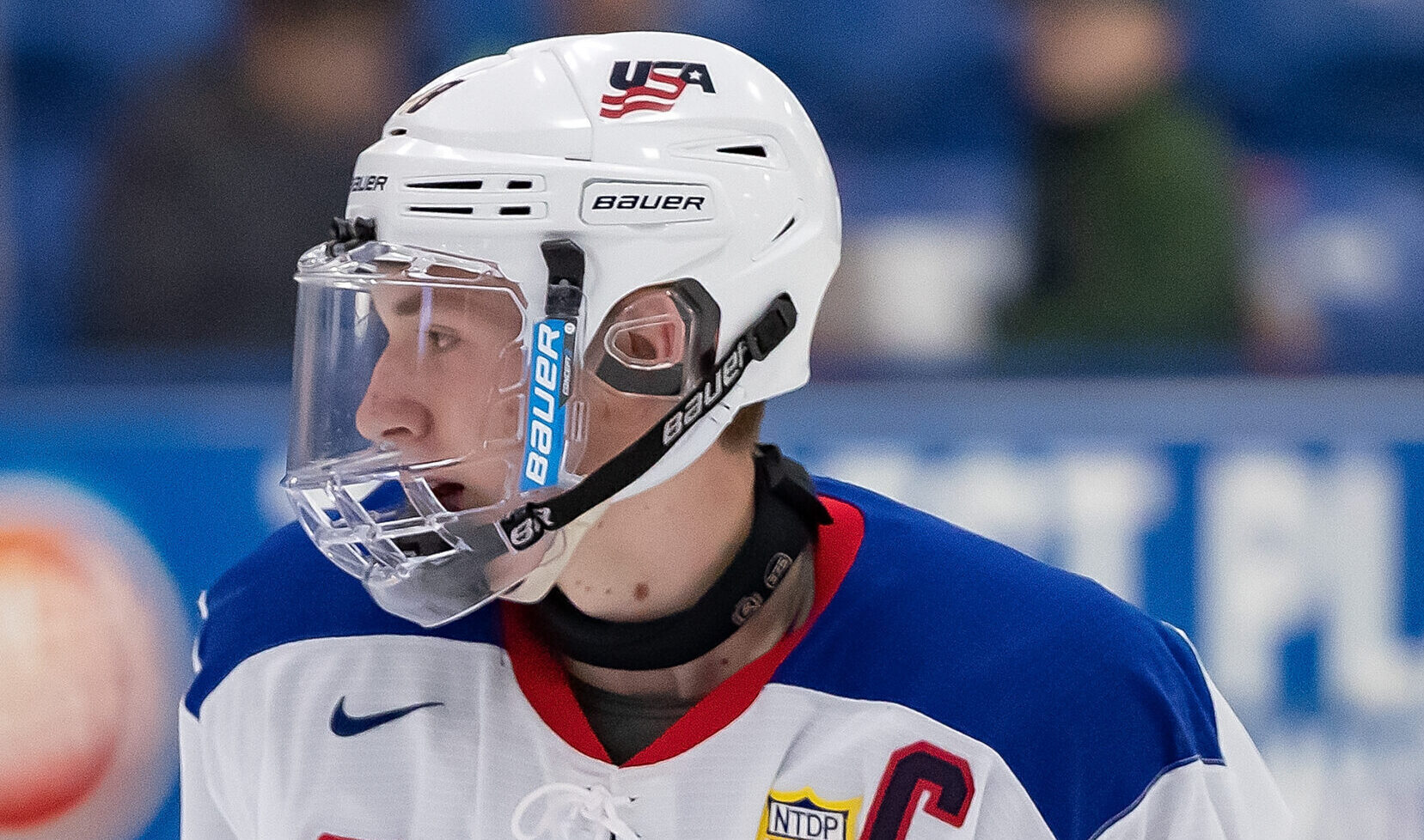 Whitefish, a picturesque ski resort town in Montana, was listed by the New York Times as one of the 52 Best Places to Visit in the World. Montana is a state that’s been a breeding ground for several professional athletes over the years, like NBA Hall of Famer Phil Jackson, NFL/CFL QB Dave Dickenson and a host of other football, basketball, baseball, MMA, figure skating, golf and of course, skiing pros.

When it comes to hockey, the list of NHL players is not as impressive. In fact, it is non-existent. No one from Montana has ever played in the NHL.

Jake Sanderson intends to change this and change it very soon.

The Ottawa Senators selected Sanderson with the #5 overall pick in the recent 2020 NHL Draft and fans hope the Defenceman becomes a pillar on their Blue Line soon, and for many years to come.

His excellent season captaining the United States Under-18 National Team catapulted Sanderson up the Draft Rankings and had scouts excited about his skill, speed and hockey sense had him rated as one of the most NHL-ready prospects from the Draft.

We caught up with Sanderson to talk about Montana, the NHL and of course, what it’s like to be drafted 31 spots higher than his old man, former NHL All-Star Geoff Sanderson.

Tell us a little about Whitefish. What life was like for you growing up there?

Whitefish was a super cool place, it’s probably my favourite place in the world to go. It’s a super cool town, they have a big ski hill there that I used to ski on a lot. We go back every summer, I do a lot of mountain biking there. We live on the lake too, so we go out on the boat a lot and go fishing. Whitefish is a great spot.

It’s been said that you would be the first player born in Montana to ever make it to the NHL. What does that mean to you, to be able to put Whitefish on the hockey map the way that your father (former NHL star Geoff Sanderson) did for the North West Territories?

I think if I could be the first, that would be super cool. Hopefully one day, younger kids living in Montana could maybe look up to me and follow my path.

Speaking of your father, who was known for his speed and scoring, what made you decide to become a Defenceman? Was it a difficult decision for you or did you know early on that you were better suited to play on the back end?

When I was younger I played a bit of both. I played forward and a bit of defence. At the time I was a pretty good backward skater. I like playing on the back end because you can see the whole play from back there. My mind is one of my strengths as a hockey player, so I just think defenceman was the best fit for me.

You skyrocketed up the NHL Draft Rankings this past season. What do you think were the biggest reasons for your rising stock this past year? Did you make any changes to your game or work on anything in particular that you feel helped elevate your play in the scouts’ eyes?

My confidence grew as the season went on. At the start of the year, we played a lot of college teams… and once we were done with the college games and went back to playing kids our own age, it was a lot easier because we were used to playing the older and bigger guys. Once we switched over I felt more dominant. I think our team as a whole started to play a lot better too, which kind of complimented me individually.

The draft process was obviously different this year. Did you do a bunch of interviews on Zoom with various teams? What was that experience like for you – and did you have any idea that the Senators were going to draft you after you spoke with them?

Ya, the process was pretty unique. Hopefully, it won’t happen again to other kids, but it was still cool. I was in Whitefish at the time of the draft. Being a kid that watches a lot of NHL hockey and getting to talk to the managers and stuff that means a lot. Ottawa was actually my first interview and they drafted me, so that’s cool. I didn’t really know who was going to draft me.

How did it feel to be coming to play in a Canadian city with one of the youngest rosters in the NHL?

I was so excited to hear my name. I have only heard great things about the Senators staff and players, I’m staying here in North Dakota with Jacob Bernard-Docker and he tells me a lot about it. To be in the Nation’s Capital is super special.

Who were some of your favourite players growing up as a kid? What did you like most about them and what current (or former) NHL players do you feel your game is similar to?

Growing up, I loved watching Drew Doughty. Right now I’d say one of my favourite players is Nathan MacKinnon. I like to model my game after Miro Heiskanen.

Tell us a little about you away from the ice. Are you a gamer?

No, I’m not a gamer (laughs). I was in Michigan when Fortnite came out, and a lot of my teammates played. I played a little bit, but I haven’t played Xbox in a couple of months at least.

For a pre-game meal, my billet mom last year made some really good grilled chicken with some sauce on it and artichokes.

This interview is for our Holiday Issue. What’re the best and worst Christmas gifts you remember giving or receiving from family members growing up?

I think the best Christmas gift I’ve ever received was when I was younger, and I got a custom hockey stick with my name on it. It was the first time I had a stick with my name on it with the American flag. I think the worst present was when I got a pair of socks. I needed socks at the time, so it wasn’t a terrible present, it was just not what I expected to open (laughs).

What will be your first major purchase with your 1st NHL cheque?

I want to stay smart and save money, but one thing in the back of my mind is that I want to help my parents keep our house in Whitefish in the family. We’ve had that house for a really long time and I would love to help them to keep the house in our family for generations to come.

Have you ever been to Ottawa?

Ya actually, I have been to Ottawa. We went to the Parliament buildings, I think I was in 8th Grade. It was a field trip.

What is the best piece of advice you have ever been given, that you would give to young players reading this who also want to be drafted into the NHL one day?

The best thing you can do is find a good routine and stick to it. Implement hard work, always try to outwork your teammates and the other guys on the other teams, because work is the thing that takes everyone far. If you work the hardest you know it’ll pay off.