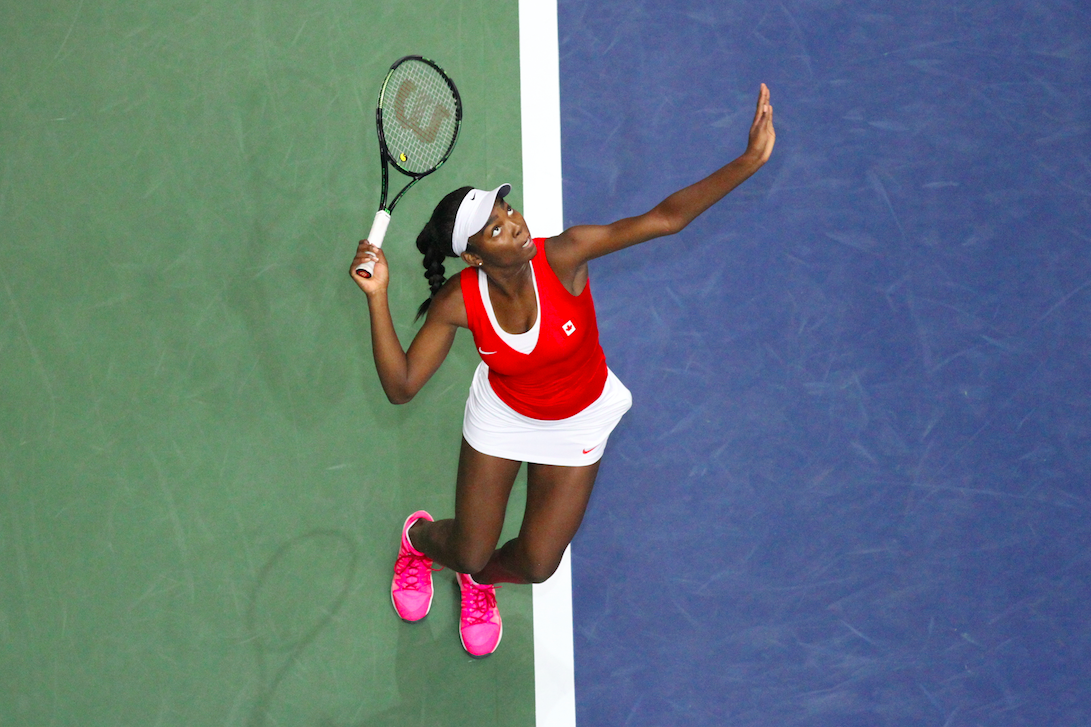 Recently celebrated as one of Flare Magazine’s 100+ talented, ambitious and driven young Canadian women, 20-year-old Françoise Abanda continues to make her mark as a professional Canadian tennis player. Reaching her highest WTA singles ranking for 2017 of 111 on October 9, 2017, Abanda was just one spot away from breaking the top 100, which would qualify her for the main draw into the Australian open, and fulfill her prophecy of having a breakthrough year.

And if anyone deserves that kind of a breakthrough, it’s Abanda. From age seven—when she first picked up the sport—the Montréal native has been working hard on her way to the top. At just age 12, she had her first major win in France in an under-12 tournament. Now, she plays “for the whole country” in tournaments like the Fedcup, the world’s largest international tournament for female tennis.

Abanda is also a face of the On The Ball Program, run by one of her major sponsors, the National Bank. The program recycles used tennis balls and donates them to schools in Ontario and Quebec to promote quieter learning environments in classrooms. The tennis balls are placed under chairs to quiet noise. As part of the program, she made a stop in Ottawa to speak to local schools. It was here that Faces caught up with the young tennis star to talk more about the program, and her success in women’s tennis. 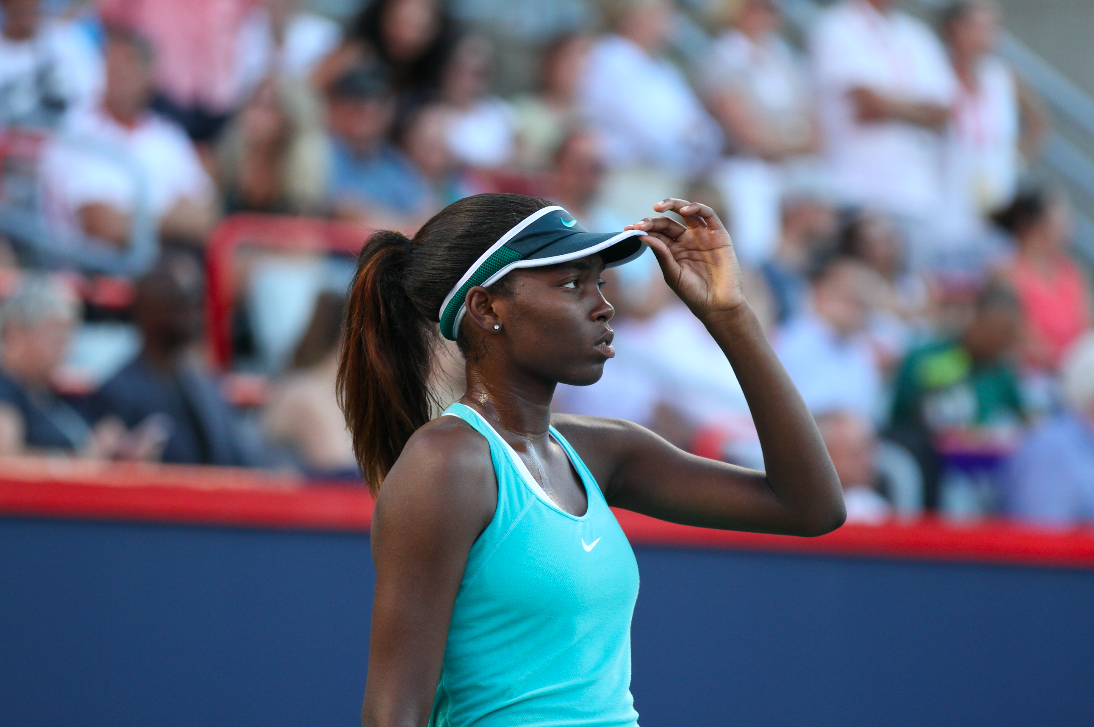 Faces Magazine: What was it like growing up in Montréal?

Françoise Abanda: Life in Montréal was great. Now that I’ve traveled the world, I can say it’s my favourite city for sure. I grew up in Montréal and I developed my game there up until I was 18 years old.

As a child, who were some of the tennis players you admired?

I really looked up to Venus Williams—both the Williams sisters really. I actually got to play against Venus in 2014, and that was a great experience. We’re not from the same generation, so I didn’t think I’d get to play her. Now, I just have Serena left to play!

In 2012, you played your first WTA qualifying match in Montréal and Quebec City. What was that experience like, especially playing in your hometown city?

I personally had an amazing experience playing at home. I have had great results there, like in FedCup, where I had 2 top 50 wins earlier this year. I use the crowd to my advantage. I definitely like playing at home and I think Tennis Canada wants more games there, so that’ll be great for me.

Just recently, you were ranked 114th in the world at just 20 years of age, and top 10 worldwide among juniors. Who are some of the people you’d like to thank for their continuous support?

I first started playing tennis because I wanted to follow my older sister; she was really into tennis. Because we were so young, we didn’t have any experience in the game to show us what was right or wrong, so, whenever my sister did something right or wrong, I was the younger one, and I was able to use that to my advantage to learn from it. I was in a better position, and I decided to turn pro. I had some good wins and some bad losses too, but it’s part of the journey. I just want to keep going and keep improving.

Out of all of your matches to date, is there one that really stands out for you?

I think playing for Canada—playing for the whole country—at FedCup. I really hope to play in the Olympics one day. Obviously, Rogers Cup in Montréal where I grew up was an amazing experience when I played there. I lost the match but it was a great experience.

Tell us a little bit about the On The Ball program—what made you want to get involved?

National Bank is one of my main sponsors, and I’m an ambassador for their On The Ball Program. Tennis balls usually last about 3-10 games, and this program recycles used tennis balls by giving them to schools in Canada to put under their class chairs. I’m really excited that National Bank trusted and supported me, which took the pressure off of me to pursue a career. Travelling is very expensive, so I’m very grateful. 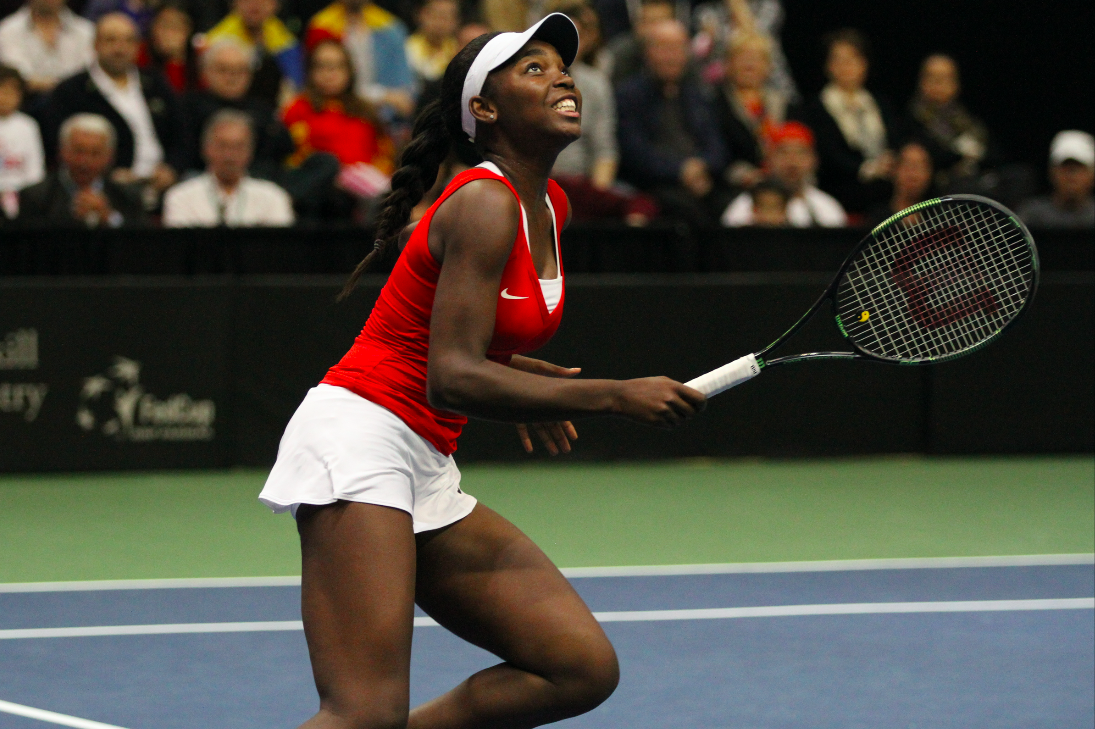 Do you get to visit Ottawa much?

I played a challenger in Ottawa last year sponsored by National Bank, so I got to come back and play that tournament. Now, I’m playing in some of the big leagues, so I’m going to continue playing the Wimbledon’s of the world and hopefully stay in those.

At 20 years of age, you’ve already traveled to so many tournaments this year all over the U.S. and Canada. What are some of the key challenges you face from being on the road so often?

I’m still young but I feel like my goals are so high right now that I feel like I’m getting old fast (laughs). Travelling has hands-down been the most challenging part for me. Growing up being a junior, I had to make school work while playing tennis and traveling. Teachers didn’t always understand that, but I couldn’t tell my coach that I was unable to make certain tournaments because I had to be in school. I was able to join a program that allowed me to do school long-distance, but that was really hard too. I would finish a match and then go study. Also, the flying is really tough because of the jet lag. Each week, there’s a different tournament, so it’s tough, especially because you’re not home often. I didn’t really have a normal childhood of going to birthday parties and whatnot. I dedicated a lot of time to tennis, so I’m glad to be able to go on tour now.

What is one of your short-termgoals that you’re currently working on?

A short term goal is to crack 100 for sure. I was hoping to make that by the end of the year. I am currently ranked 115th, so I need 15 spots to go, which would get me into the main draw for the Australian Open. That’s my main goal now. From top 100, hopefully I can keep improving in the rankings.

No, not really. I think I’m a simple player, especially with my training; I try to keep things simple without complicating them too much. The main thing for me before a match is to warm-up well—get myself sweating a bit and ready to go, listen to some music, etc. I listen to some pop, some hip-hop, some Drake. My first language is French, so I enjoy listening to a lot of French music.

How do you feel that the game of tennis has put a positive impact on local communities around the world, and why is that important?

I feel like in Canada, the number one sport is hockey. Tennis is sort of just coming up now; especially with all of the amazing tennis players we have representing Canada at the moment. Now, tennis is more international and more in the scene. When someone sees that they’re playing a Canadian, they think, “Oh wow, they’re good!” (laughs). We have a great reputation now. It’s good for the sport and it’s good for Canada. It’s also good for kids. People are getting more involved. Whenever I play the Rogers Cup in Montréal, people are more and more into it. They’re screaming, cheering, it’s just a great vibe. 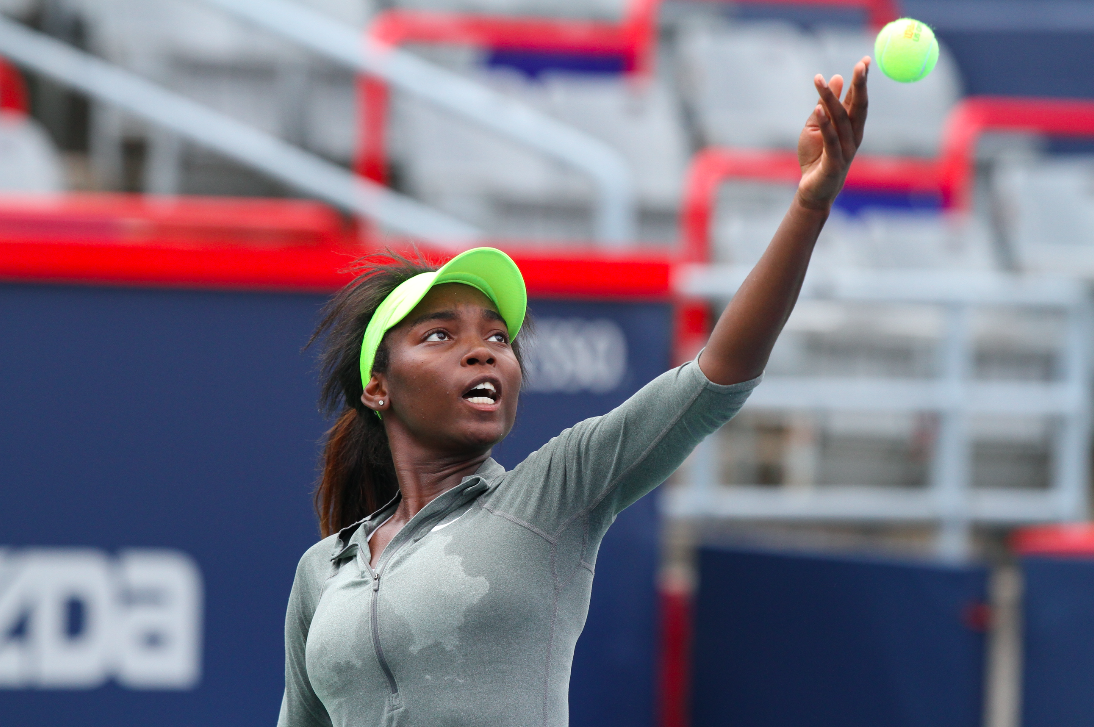 What’s next for Françoise Abanda?

What’s next for me is a big breakthrough (laughs). To be honest, that’s what I wish for myself. Hopefully, I can have a big breakthrough next year and a slam. I know I can do it, so it’s just a matter of putting everything together—training, good timing, perseverance…and hopefully I can achieve my goals. 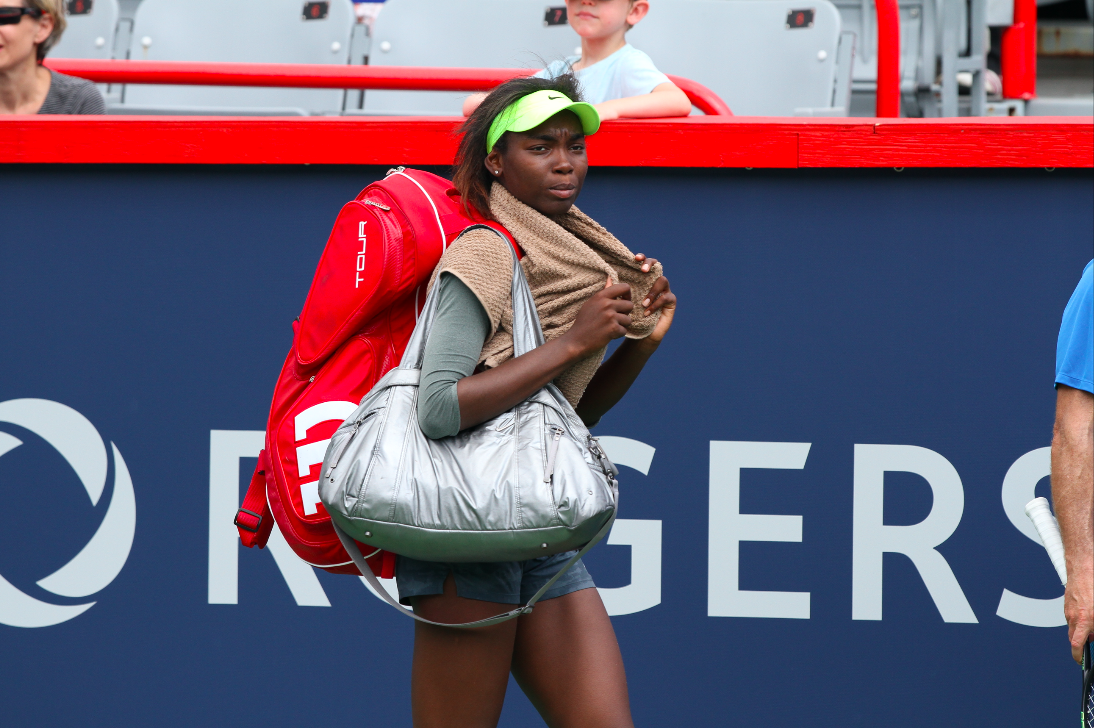