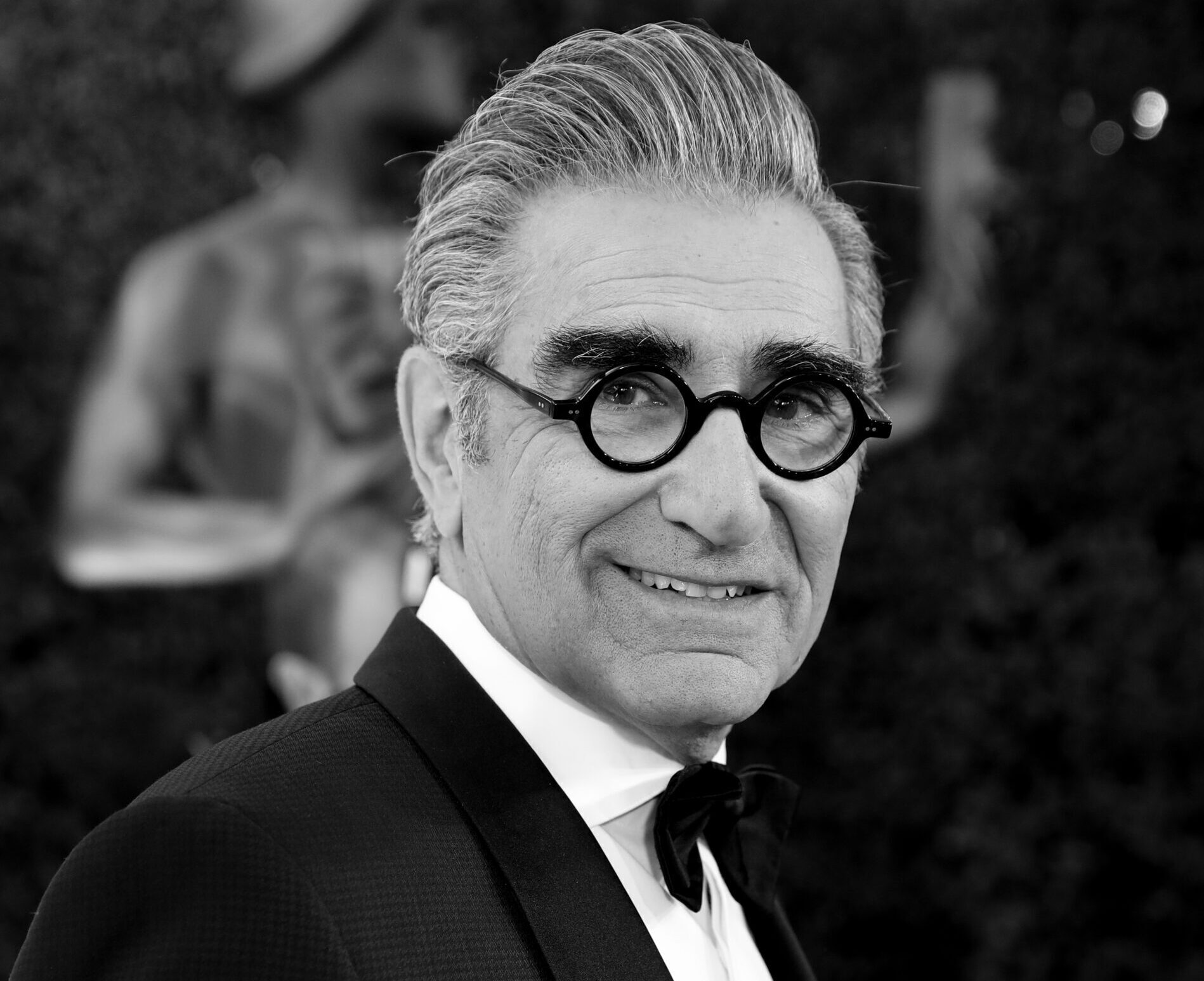 Holding his Emmy for outstanding lead actor in a comedy series above his head, Eugene Levy was in a buoyant mood after Schitt’s Creek swept all the major categories at the Sunday, Sept. 20th virtual ceremonies. The only thing that kept celebrations to a minimum was the restrictions on how many guests he could invite to Casa Loma restaurant in Toronto where he and fellow cast members basked in their triumph.

Ironically, Levy and his son Dan, alongside Schitt’s Creek co-stars Catherine O’Hara and Annie Murphy (all Emmy winners in their categories) had to wait until they had wrapped the sixth and final season of the show before receiving such massive recognition for their work. The critically acclaimed CBC series only began to reach mass audiences after Netflix began streaming episodes in the U.S. and abroad. But after five decades as a highly successful actor/comedian, the 73-year-old Levy is deeply grateful for the opportunity to have scored arguably the greatest triumph of a career that he never had any intention of pursuing as a young amateur player growing up in Hamilton.

“I had no idea this was something I could do for a living,” Levy recalled. “It’s not like I was thinking this is what I want to do. It never occurred to me that even though I was spending so much time doing it that you could actually go out and make a living at it. It wasn’t until I left McMaster and called my friend Ivan Reitman, who I had gone to school with at McMaster, and he gave me a job on his first picture in Toronto. That’s how I got started, but there was never any kind of conscious decision that acting is what I wanted to do. I just kind of got into it through the back door.”

Having honed his craft as one of the leading players on Canada’s SCTV comedy sketch series in the 70s and 80s, Levy would go on to become a regular comedic presence in numerous Hollywood movies including American Pie, Serendipity, Father of the Bride II, Bringing Down the House, and Cheaper by the Dozen 2.

But it has taken Schitt’s Creek – a series Eugene Levy executive produced, starred in, and co-created with his son Dan (who also served as showrunner) to finally shine the spotlight on him. He and Dan also became the first father and son Emmy nominees to win in the same year, yet another source of pride for the elder comic patriarch whose daughter Sarah also features in the series.

“As a dad, getting to work on camera for six years with both my kids, Daniel, and Sarah, I had such a joy. I love you both and could not be prouder,” Levy gushed during his acceptance speech at the virtual Emmys.

Many Canadians and audiences in the U.S. and Europe who have come to love Schitt’s Creek will share the bittersweet feeling that Eugene Levy and fellow castmates have over the decision to end the series, especially in light of the unexpected Emmys sweep. “There were a lot of tears when actors would finish their last scenes together,” he said on The National. “There would be 10 minutes of hugging and lots of tears.”

How remarkable has it been for you to achieve this kind of success after nearly 50 years in the business?

It’s something I never expected would happen. Most actors don’t get to enjoy this kind of opportunity and so it’s been a great gift and a great chance to work with Daniel and see this series take off and find an audience.

How do you feel about the way the final season of Schitt’s Creek brings the Rose family saga to a close?

It’s a natural culmination in how things naturally work themselves out in terms of relationships and character growth and it all kind of points to a very satisfying ending…We felt that we had reached the point where nothing really more could be achieved in terms of pushing the story forward.

Sometimes the best thing you can do is to end a series while it’s still creatively interesting and the audience loves it rather than to keep it going forever because it would be easy to do that. I like the idea of leaving it with a really good feeling about what we’ve accomplished.

What has it been like playing a father on a series in which your TV son is also your real son, Daniel?

Sometimes you find your own feelings for your son coming through as the character you’re playing. But I never found that to be a problem – it actually helps you at times when you find yourself treating your TV offspring the way you would in real life. There were many occasions working with Daniel and Sarah (who plays waitress Twyla Sands – ED) when I found myself thinking of them as my character exactly as I would react as their father – it was really hard at times to stop thinking of Twyla as Sarah!

And when it comes to Annie Murphy, she’s so wonderful and endearing that I treat her with the same kind of love that I have for my own daughter. This has been a very rewarding time for me and something I never imagined I would ever have the chance to do and I owe a lot to Daniel for helping make it happen.

How did you feel about collaborating with your son Dan when he first approached you with the idea for Schitt’s Creek?

He never came to me for anything in his life — when he was in school doing plays, [I’d say], “Do you want me to help you read lines?” And he would say, “No, I got it.”

So when he finally came and said, “I have an idea for a show, do you want to work on it?” As a dad, it’s like, “This moment finally came, thank you; it doesn’t matter what the idea is, I’ll work on it, we’ll try to get it going.”

But at the same time, I started to worry: “What if he doesn’t have the talent to do this as a writer? Do I tell him that he doesn’t have the talent, or do we go [ahead] knowing nothing’s going to happen with it?” And you think Sophie had a choice! [Smiles] That was my dilemma and it turned out right away there was nothing to worry about. Very shortly after we started working on it, I saw that Daniel was a very talented writer. 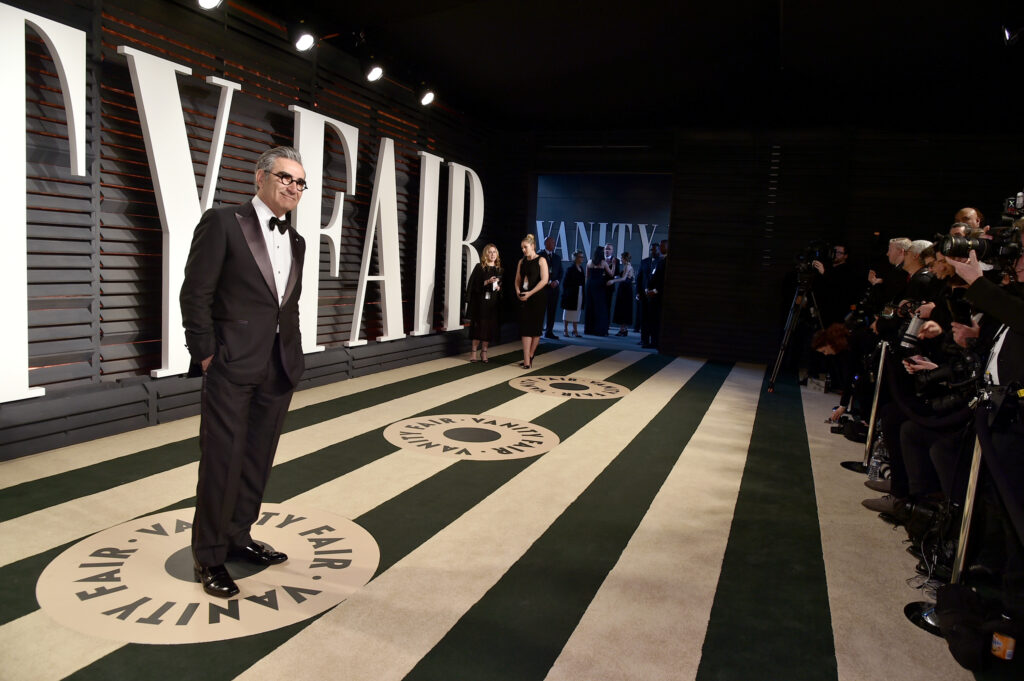 How close is your character Johnny Rose, the patriarch of the Rose family, to the real Eugene Levy?

I was always doing everything to not play myself…but in this series, it was a strange feeling to play a character that often blurred the line between me and Johnny. I would worry that I needed to do something to make the character less like me! It’s been an odd experience, but very satisfying in the end.

Seeing your children succeed as actors must be very gratifying to you. Did you however try to steer them away from your profession while you were raising them?

We didn’t want them to be locked into show business…There’s something about raising kids in a showbiz-y kind of environment that’s a little scary. Toronto is just a very normal town. They could grow up with all options open to them of what they wanted to do. Of course, the irony is they both went into acting — and [then we all wind up] on a show together.

You came up through Second City Theatre and evolved as a comedian during your time on SCTV [where he worked with Harold Ramis, John Candy, Joe Flaherty, Dave Thomas, and Catherine O’Hara. How do you reflect back on that time and developing your skills doing comedy and improvising in front of the camera?

Improvising is coming up with material off the top of your head but realizing everything you’re doing [has to] work for the scene. It’s not just a question of how funny you can be, it’s [also a] question of how you can move the story…

The sensibility that you have when you’re improvising is that it’s totally the stories [and] character-driven I was fortunate that when I started [on “SCTV”], our head writer, the late Harold Ramis, who was an amazing writer, mentored the rest of us. All we wanted to do when we were coming up with material was to please Harold. His nod of approval was what was paramount.

One of the movies so many of your fans identify you with is American Pie. Did you expect it to have such an impact on your career?

It was a major turning point, and it almost didn’t happen. When I read the original script, I thought it was a little raunchy. I kept saying, “I wouldn’t go to see this movie, why would I want to be in it?” Finally, I went in and had a meeting with [directors] Paul and Chris Weitz and told them my problems with the character, and they said, “What do you want to change?” I said, “I don’t want the guy to be a nudge-nudge, wink-wink friend with his son. I want him to be a square dad, the kind your kids don’t want to be around because they’re too boring.”

So we came in and improvised, and then everything just started opening up. It was a huge hit and definitely turned my life around—no question about that.