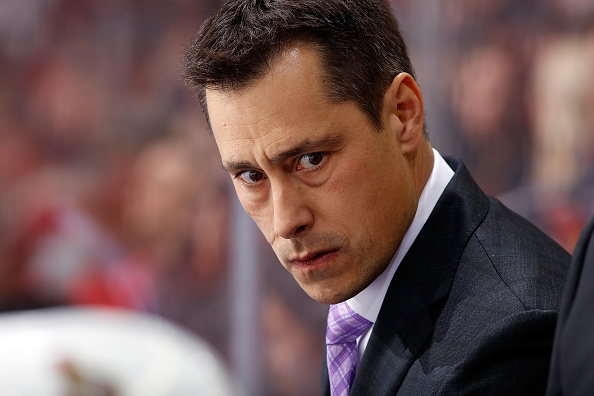 It was a crushing moment for the Ottawa Senators, but head coach Guy Boucher just stared, seemingly frozen in thought. Was this grace under pressure or was it just another colourless moment from an increasingly colourless game?

First, let’s look at the facts. The Senators had just completed a 3-goal comeback in the third period against the Vegas Golden Knights on Nov. 8 but had quickly given up another to go down 4-3 with just under half the period left to go. Regardless of the sudden setback, the hometown Ottawa crowd was getting louder and the Senators best players, most notably young phenom Thomas Chabot, were coming on in waves. It was only a matter of time before the building was set to erupt again.

What happened instead was another Vegas goal that looked to most rational viewers like clear goaltender interference, with Pierre-Edouard Bellemare, the goal scorer, actually lying on top of Craig Anderson as the puck crossed the line. Even Bellemare believed it would be called back as he skated to his bench and shook his head, knowing he’d never get away with that one. The Ottawa bench looked unconcerned.

To the disbelief of many, the NHL head office cleared the play and Vegas suddenly had a stranglehold on the game. Anderson, rightly, was furious. He berated the zebras non-stop for minutes, even while the play was going on around him. Clearly rattled, he shoved a Vegas player out of his crease on the next play, and lost his balance doing so, looking like he might go into total meltdown mode at any moment. The fans, as upset as they were, loved the display by the normally even-tempered puck-stopper.

There was no such display of emotion from Boucher on the Senators bench. Sure, his eyes bulged a little, and he gamely tried to stare down the official, but fans waiting for a response had to resort to Twitter to vent their spleens. They couldn’t even get a beer at that time in the game. Those taps were as tight as Boucher’s lips. Once the coach decided to say something, it was to routinely call out his next forward line.

Now I’m not here to glorify and spin exaggerated yarns about the famously mercurial coaches I watched growing up… okay, maybe I am.

Boucher should have gone nuclear.

He should have gone full bench-toss like Robbie Ftorek. Waved a white flag on the end of his stick like Roger Neilson. Threw his gum and charged like Pat Burns. Pulled out a mascot’s tongue like Craig MacTavish. Or tried to start a riot post-game like the only coach with fire left in the modern NHL, John Tortorella.

From a purely hockey standpoint, Boucher should be commended for keeping his cool and giving his team the best chance to recover by not taking a bench penalty. Of course, by then all the energy had been sapped out of his players.

From a team building standpoint, Boucher should have broken some furniture and taken the penalty or the game misconduct. I’m guessing the fans would have loved him for it and so would his players. After the week from hell here, with “Ubergate” nearly destroying the trust between coaches and players, it would have been a bit of absurd comedic relief to see Boucher go ballistic. Nothing brings a team together like a good old “schmozzle”, but Boucher was much too in control to let nature take its course.

Just down the bench, Associate Coach Marc Crawford was equally as numb. Most people who have watched Crawford on the bench over the years during his stints in Colorado, Vancouver and L.A. would know that Crawford is an incurable maniac, a boiling mass of rage when something sticks in his craw. He’s mellowed a little over the years, but he’s lost his mind occasionally on the Ottawa bench the past few seasons when he couldn’t help it. Not this night. Boucher has everybody playing polite.

The last Ottawa coach to really entertain in this regard was the late, great Bryan Murray, who was actually known as a professorial kind of coach during his long and varied career. With his distinctive lisp, white hair and glasses, Murray was a gentleman during the 80’s and 90’scompared to his peers like Glen Sather, Jim Schoenfeld, Pierre Pagé and Jacques Demers among others. Yet Murray instinctively knew the right time to blow a gasket, and his players almost universally loved and respected him.

His most hilarious moment came in 2005 when the Senators trounced the Kings 5-1 in Ottawa, and L.A. colour analyst Jim Fox berated Murray on-air for not controlling his players in a brawl filled game. Somehow Murray got wind of Fox’s comments immediately after the game and hunted him down in the hallways, unleashing an all-time verbal assault that is thankfully preserved on YouTube for future generations. Murray was actually able to drop a record 4 F-bombs in 3.2 seconds, something no modern NHL coach outside of Tortorella would even contemplate attempting.

Which brings us back to Boucher. He has a keen analytical mind for a coach, and an intensity that’s unmistakeable when he’s on the bench. Yet fans would love to see him loosen that tie occasionally. There’s a rigidity in his persona that fans have come to accept, but I suspect that underneath all those systems and focus, there’s a stick-tossing, F-bomb throwing old-school coach who can throw a tantrum with the best of them.

The occasional outburst of emotion and irrationality was part of the package we were sold growing up watching this great game. Lately, it feels like we’ve been getting a bum deal.