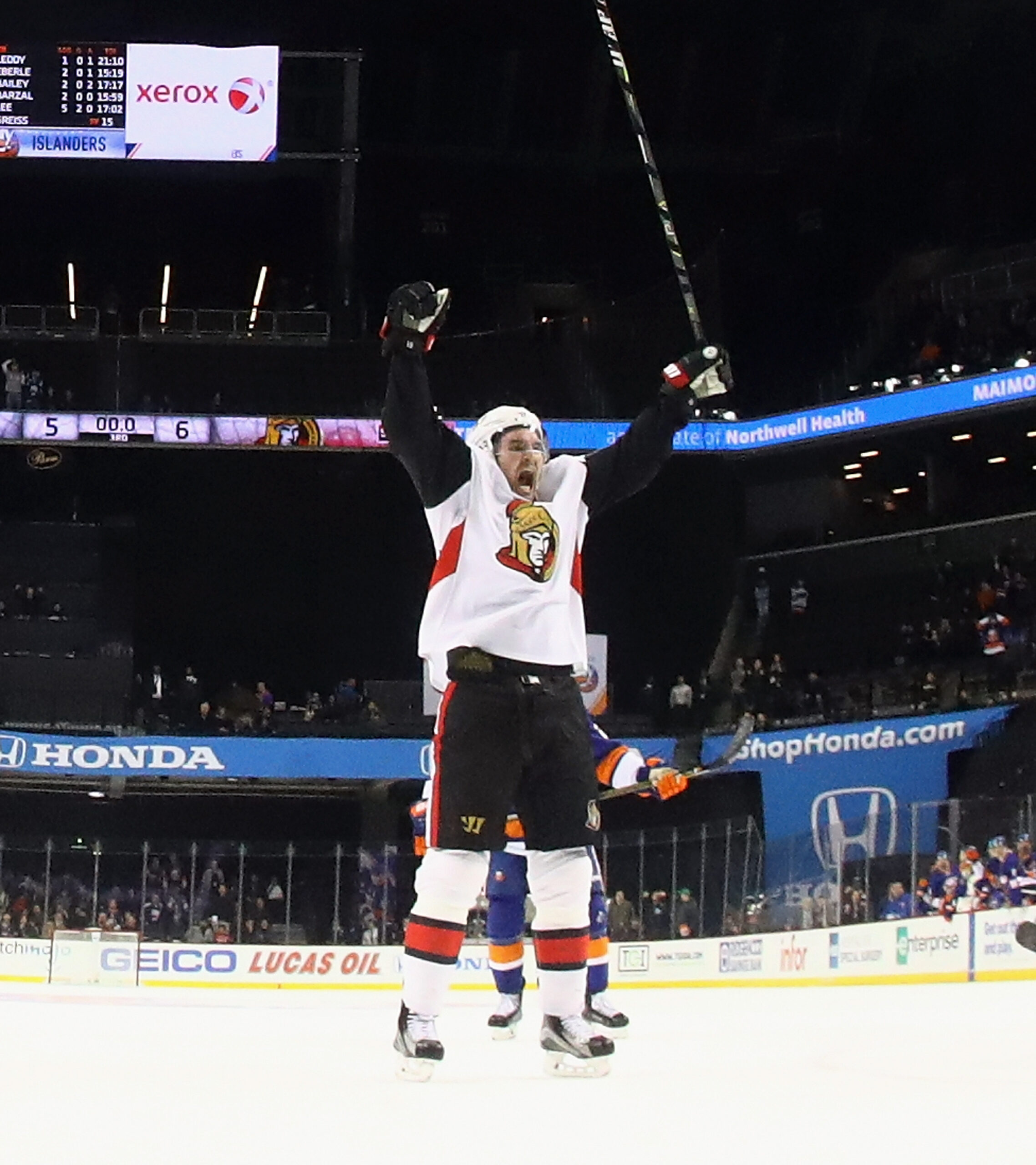 NEW YORK, NY - DECEMBER 01: Mark Stone #61 of the Ottawa Senators celebrates a win over the New York Islanders at the Barclays Center on December 1, 2017 in the Brooklyn borough of New York City. The Senators defeated the Islanders 6-5. (Photo by Bruce Bennett/Getty Images)

It’s been a long time since we’ve heard the Canadian Tire Centre that frighteningly loud.

When Mark Stone scored the overtime goal against the Montreal Canadiens on a recent Saturday night, with legend Bob Cole calling the game for Hockey Night In Canada, the crowd erupted into a kind of defiant frenzy. Defiant in the sense that every single pundit had predicted disaster for this much maligned hockey team, and here they were clinching their third straight win on home ice against arguably their biggest rival, the vaunted Canadiens.

Even more impressive was close to half of the crowd were Montreal fans. That incredible, roof-lifting noise was created by a suddenly energized group of Sens die-hards besieged in their own building. So many people had jumped off the bandwagon during a tumultuous summer that the remaining believers seemed more like a cult than a mainstream fan base. Yet for a brief moment, the home town crowd took their turf back.

As loud as the ovation was, it was Stone himself who let out the biggest roar.

Nobody celebrates goals, his own or his teammates, more aggressively than Mark Stone. Sure, Alex Ovechkin ritualistically leaps into his fellow Caps arms after every goal with his eyes closed in jubilation. P.K. Subban gets down on one knee and pumps his fist like he’s trying to start a lawnmower. Every other young star NHL star has been jumping into the glass after a goal since they were in Pee-Wee.

It’s only Mark Stone who looks like he’s going to eat someone alive when the red light goes on.

He never casually skates over and pats someone on the helmet like Bobby Ryan does. He immediately locks eyes with whoever is nearest and lets out some kind of primal scream that would horrify any doctor if it wasn’t masked by a screaming crowd.

People have been pouring money into psychiatry for decades in hopes that they could achieve just a smidgen of the emotional release that Stone gets when he scores a goal.

And that is just part of the reason Stone is the de facto captain-in-waiting. With former captain Erik Karlsson now plying his trade in the Bay Area, the Senators decided to go with four assistants, but nobody is really fooled by the decision.

The only reason Stone doesn’t have the “C” sewn on his sweater is the fact the Senators need to sign him before July 1st or risk losing him to free agency. They avoided arbitration this summer by signing Stone to a stop-gap 7.3 million one year deal in hopes that they could work out a longer contract during the season.

By all accounts it looks and sounds like Stone wants to be in Ottawa long-term, but nothing is ever easy in this town. If it was, Daniel Alfredsson would have never ended his career in Detroit and Karlsson Sens jerseys would still be flying off the shelves.

Fans have fallen in love with players before and every single time they get their hearts broken when some kind of money or personality issue seems to flare up and force some kind of hastily explained exit. The unthinkable already happened with Alfredsson and Karlsson, so it’s not hard to imagine Stone playing in his hometown of Winnipeg next year or some other metropolis with money to burn.

Yet this feels like one that can be pulled out of the fire.

GM Pierre Dorion and Head Coach Guy Boucher’s eyes go a little misty when talking about Stone. He’s a “hockey player’s hockey player”. He never cheats defensively, he’s got hockey sense that you could never teach in a million years, he has hands that can pick corners or pick pockets with equal ease. He’s taken Brady Tkachuk, the most recent young Sens phenom, into his own home to live for the year and tutor through the ups and downs of playing in a Canadian market.

Management and coaching types would gladly sever a finger to get their hands on player like that. Undoubtedly, Dorion knows what he has in Stone and will do everything in his power to get this deal done.

Now it’s up to Stone.

He’s come a long way since his 2012 NHL debut for the Sens in a playoff game against the New York Rangers. He notched his first point when he set-up Jason Spezza for the game winning goal and he’s been a clutch performer in the biggest games ever since.

Only two members of that 2012 team remain alongside Stone in Ottawa – Craig Anderson and Zack Smith. At just 26 years old, Stone has the opportunity to play here for a long time, and be the one superstar player who actually stayed.

Fans want to believe Stone could be that guy. Stone probably wants to believe that as well.

And right now that’s the only thing anyone can hang on to. Belief.

Nobody ever said being a fan was easy.