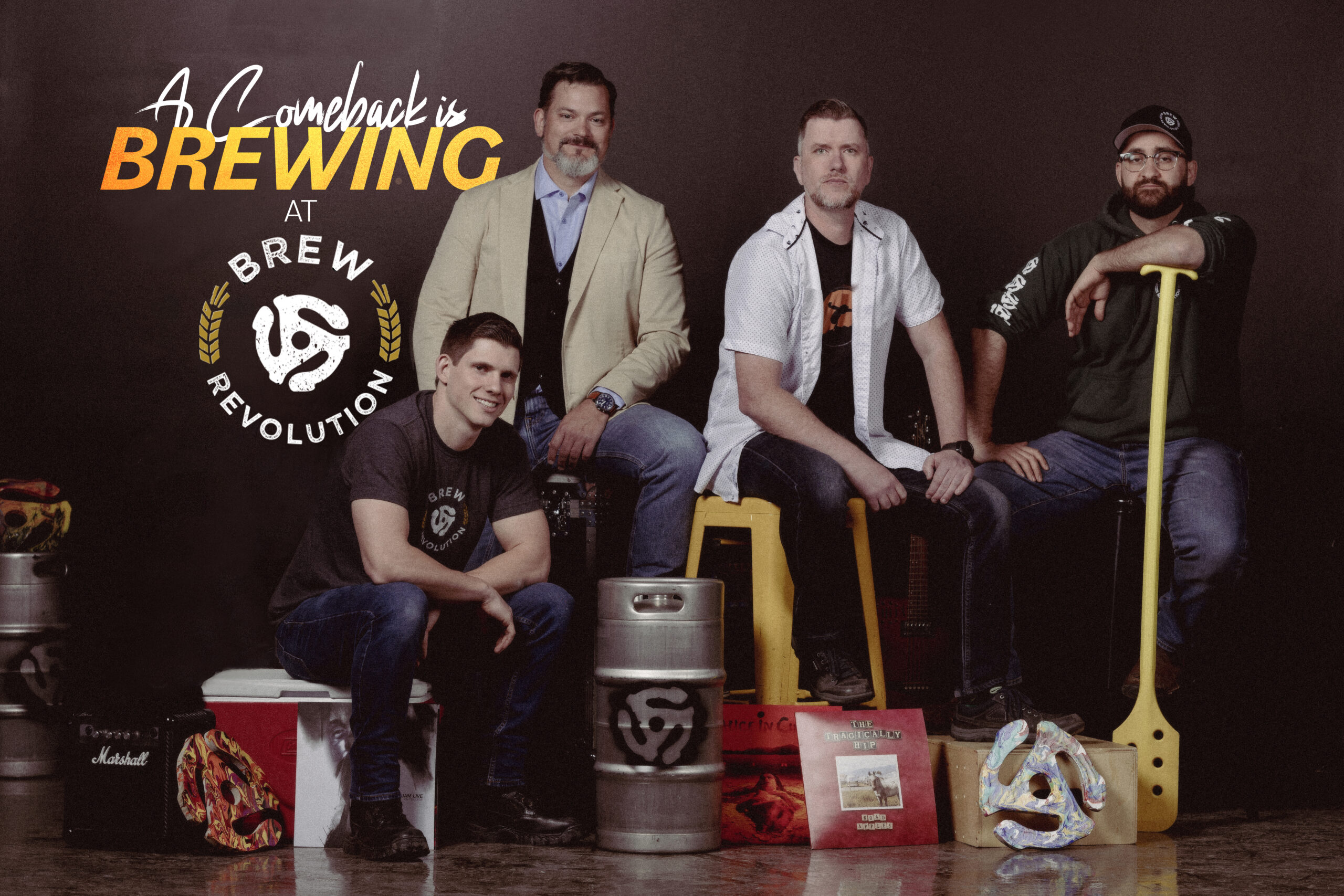 “We should start a brewery!”

It’s the mantra of a generation, one that came of age at the height of the worldwide recession in 2008. Everyone, it seemed, was drowning their sorrows—why not cash in on it, asked a hungry young demographic looking to create self-employment? Brewing technology was being seriously homogenized and social media, making advertising just as inexpensive, was hitting its first strides. No wonder every tattooed yahoo suddenly made plans to open a micro-brewery.

Only a handful, however, got it right. Ends up there’s a lot more to the idea than those sitting around scheming to the sounds of Chris Brown and Coldplay had even considered.

“A craft brewpub is effectively three businesses,” explains Matt Smith, one-third of the enterprising trio behind Brew Revolution. If you’re a craft beer hound, or just someone looking for a good time, odds are you’re a regular at their Stittsville location, where variety—from the homegrown suds to the live music—rules. “It’s a brewery, it’s a pub-restaurant, and it’s a retail business. But,” he qualifies, “the logistics of how to get three businesses off the ground simultaneously are daunting.”

That three-pronged challenge was officially accepted back in 2019, when the craft beer business was in full gear—a good thing for Matt and co-founders Chris Lemieux and Greg Jonah, able to borrow Best Practices from existing establishments. The three Kanata boys had worked, respectively, in construction, real estate, and high tech before synchronizing the aforementioned battle cry and going on to conduct “research” (a.k.a. sharing a pop or two) at area breweries.

“We quickly came to the conclusion that variety is the true driver of craft brewing,” reflects Matt. “We wanted to find brewers that would constantly push the envelope. We also set out to create a space that would be fun, casual and inviting. While beer is always our focus, we want to make sure that there’s a little something for everyone.” Hence, should beer not be your thing, the food, wine, cider, cocktails, and craft sodas. 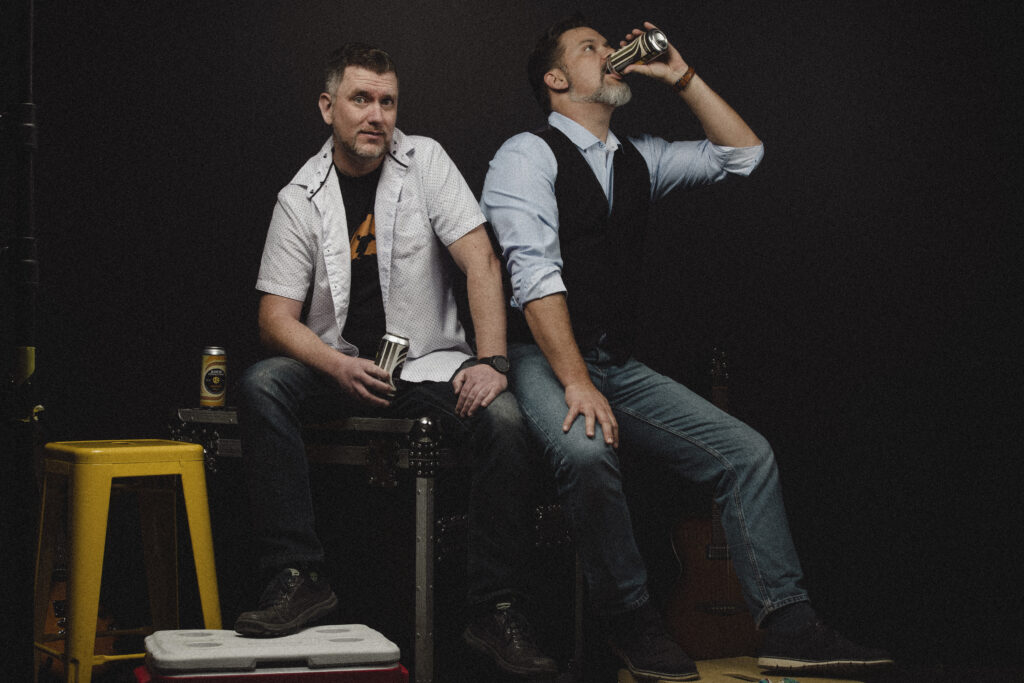 Then, there’s the music, a crucial component, cleverly represented in the company’s logo: the iconic “spinner”—better known as “that plastic yellow thing”—that, once upon a time, listeners inserted into the hole of 45 RPM records.

“The magic really happened when we nailed down that aspect,” adds Matt, who, like his partners, remains a die-hard music connoisseur. “Once we landed on that, everything else fell into place.” That “everything else” included, crucially, the contributions of two talented brewers, as driven and creative as the frontmen.

“I was told by a friend about a graduating class from the Brewery Operations Program at Niagara College,” recounts Greg. “We were able to meet with two of the stars of the class—fantastic, energetic young men named Josh Scott and Wes Burbidge. We described our vision and there was an immediate connection. They agreed to join our crew and to begin the process of building the brewery. They are true artists and were fantastic first additions to our staff.” 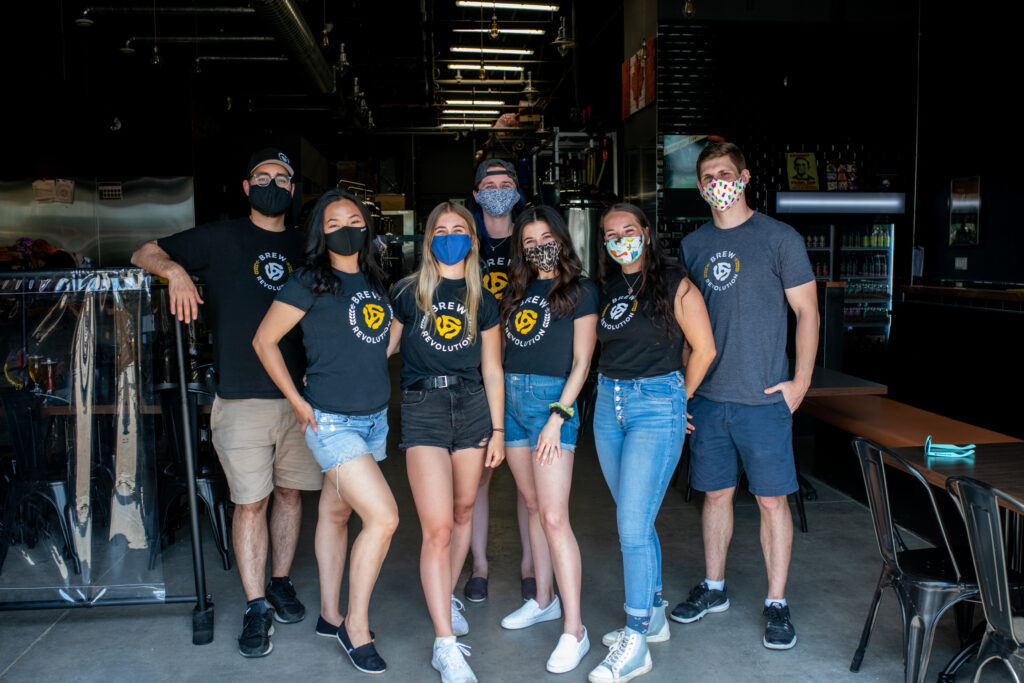 Much of the fun for all involved was, and is, the “mad scientist” aspect of the game, mixing and matching ingredients the way that people, pre-Covid, mixed and matched on the beer hall floor.

“With most brewery jobs,” elucidates Josh, “you make the same lager or IPA day in, day out. While we do brew our mainstay brands often, we have a parti-gyle system that allows us to use the same malt base to create a totally new brand alongside it. For example, we brewed our Walkin’ on Sunshine NEIPA yesterday in one kettle and decided to turn the first runnings of that mash into our first double IPA…the combination of a three-kettle parti-gyle brewhouse and thirty taps on the wall really opens up a lot of possibilities.”

That’s the best part about working at BrewRev, adds Wes, just as jazzed as his partner in pale ale. “We get to play with a lot of ingredients and styles…when we stumble on to great flavours, it’s really exciting!”

So will be seeing their brands consumed by packed houses again, once complete capacity returns to the restaurant realm. Like many a going concern, the onset of Covid brought BrewRev to a screeching halt, leaving it dangling on a precipice.

“One of the worst days of our corporate life was March 16, 2020,” Matt recounts. “We had to very quickly adapt our business model from in-house beer taps and live music to being a production facility with curbside pick-up and daily contactless deliveries. In addition, we had to vastly improve our kitchen game and learn how to deliver food via third-party apps.
“We also had to pivot and tap dance and spin in circles trying to adhere to ever-changing public health guidance. I’m truly proud that the entire team kept themselves and our customers as safe as possible for fifteen long months.”

A team that included Front of House Manager Kate Thompson, who can’t wait for BrewRev, the pre-Covid edition, to rev up again. “We offer an elevated experience for customers,” she cheerleads, explaining BrewRev’s go-to status. “The staff are knowledgeable about different styles, creating a fun space to grab a beer.”

As far as Matt, Greg and Chris, and Kate are concerned, let the fun begin! Over the course of Covid, the red ink flowed like Mild Thang, another musically named BrewRev offering. 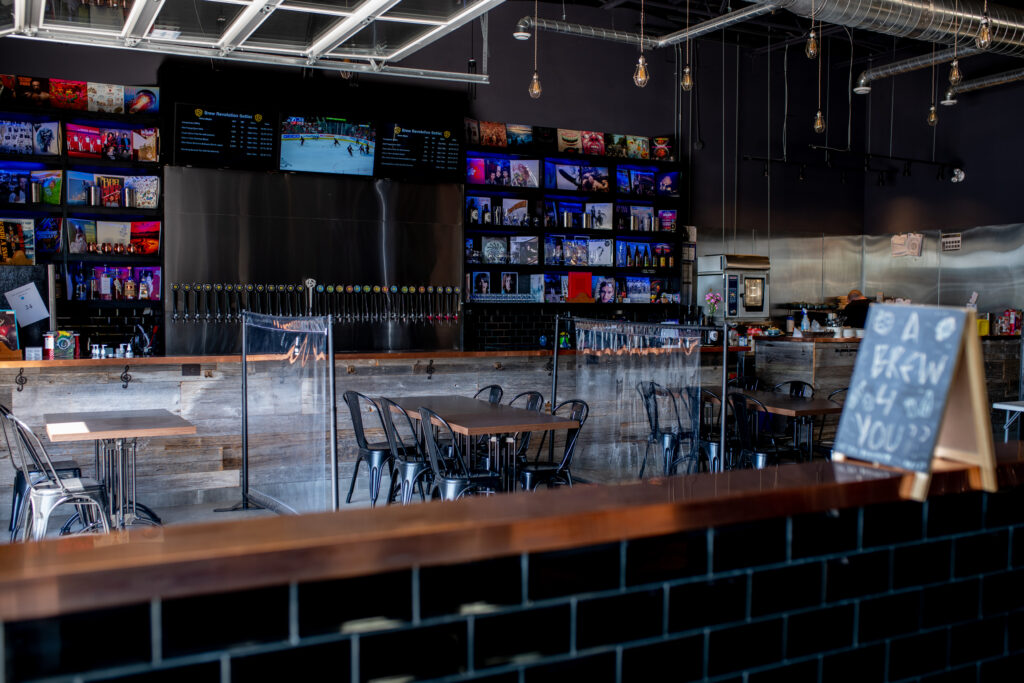 “Our next year is going to be spent recovering from losses,” Matt unabashedly explains. “It’s entirely possible it will take two to three years to recoup.” Still, he and his partners remain as driven as ever. “At the same time, we have no intention of slowing down in terms of expansion. We look forward to extending our reach and bringing new customers into the Revolution.”

If recent history is any indication, that shouldn’t be a problem. During the place’s countless stop-and-start openings, the locals were always there, as were patrons from Ottawa and Kanata. An outdoor concert series helped, as did a lobster mac’n’cheese that folks lined up for like vaccines.

No doubt there’ll be more such ideas from the Brew crew, not just till they’re in the black but beyond. Like the beer, they just keep on flowing.