At age 20, Brooke Henderson has just put another year of success under her belt as one of the top Female golfers in Canada, taking home 2 LGPA wins, including her first title outside of North America at the McKayson New Zealand Women’s Open. With 5 titles to her name, she is on pace to shatter Sandra Post’s Canadian record of 8.

Interviewing Brooke about Brooke is a challenge, and not for the reason you’d think—there is just never a moment where Brooke thinks of her success as only her own. She never stops referring to the family that has helped her make it to where she is; her sister and caddie Brittany; her coach and father, Bruce; and her number one fan, her mom.

Finishing 2017 strong, Brooke is looking forward to coming home for the Holidays, to enjoy some well-needed family time in Smiths Falls. 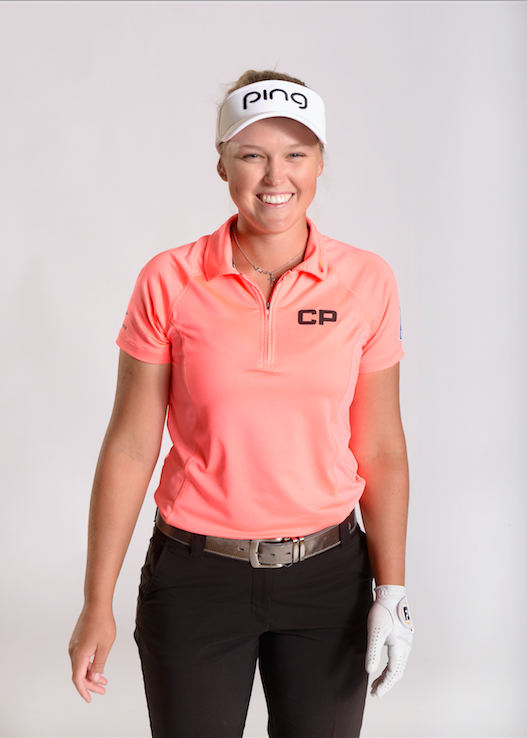 Faces Magazine: Since we last spoke to you in the spring of 2015, you’ve gone on and accomplished so many great things. You became the youngest woman in history to win the PGA Championship, you were the Canadian Press Female Athlete of the Year in 2015 and you’re now ranked in the Top 10 of female golfers in the world. Looking back at the last 2 years, is there one moment that stands out for you?

Brooke Henderson: The past two years have gone by so quickly and there have been so many special moments. Every win has been special, but winning my first Major at the KPMG Women’s PGA Championship and then competing down in Rio at the Olympics probably stand out at the top of the list.

How do you handle the pressure of knowing that thousands of people are watching you golf? Was it especially tense in the 2016 playoff to win the Women’s PGA Championship, when you prepared to make the winning putt?

I love feeling the pressure and have tried to make the uncomfortable feel comfortable for me.  That said…there has never been a tougher 3-foot putt that I’ve ever had to make than that one in the playoff at KPMG to win my first Major. My hands are still sweating!
Can you describe what it was like for you to play for Canada in the 2016 Rio Olympics? What did you enjoy most about the Olympic Games?

It was incredible and a memory that I’ll have forever. I wish I could have been up there on that podium, but just being there with my sister, staying in the Olympic Village with all of the best athletes in the world, and wearing the Maple Leaf on my hat and sleeve—it still gives me chills.

The 2017 CN Women’s Open took place in Ottawa this year. What was it like for you to play in this tournament? Was it exciting to be so close to your hometown of Smiths Falls?

It was amazing. Playing in my hometown for our National Championship…it’s hard to describe how cool it was to see the support that they gave not just me, but all of the LPGA players. I remember walking to the 18th on the weekend and I couldn’t see a blade of grass outside the ropes because it was just packed with people. It certainly added to the pressure, but once I made the cut, I was able to let out a big sigh of relief and make a charge into contention on the weekend. I didn’t win it, but was able to give them something to cheer for!
What was your mindset going into the tournament, and facing the 150 golfers on what you’ve called one of the strongest fields of the year?

My mindset was to try and keep it as “normal” of a week as possible. It wasn’t easy, but I think we did a good job of trying to limit the outside noise and distractions to just focus on it as any other golf tournament. It was just tough to do as everywhere I turned I was surrounded by family, friends, teachers, and neighbours…
Crisite Kerr stayed very supportive of you throughout the day, what did that mean for you, especially when she slowed her play to allow you time on the 18th hole to absorb the crowd?

Cristie was great and honestly helped me make the cut!  We were on the 16th or 17th on Friday and Cristie put her arm around me on the fairway and gave me a little pep talk to dig down and make it happen. I was able to make the cut and fire the course record on Saturday! Then playing with her again on Sunday, she did kind of let me have the stage coming in which was really cool of her. She’s such a pro and has been so good to me.
You’ve played in Ottawa many times growing up—what is your favourite course in Ottawa to play at?

There are so many good courses there but tough to argue with my two home courses just because of the sentiment: The Ottawa Hunt Club and Smiths Falls Golf & Country Club.

Speaking of Smiths Falls, do you plan on coming home for the Holidays this year?

Yes I will most likely be at home in Smiths Falls over the holidays. Still figuring out my off-season schedule between Florida and Smiths Falls, but I’m excited to get home and just relax and see family and friends. I will try to put my clubs down for a bit and just enjoy their company.

Honestly, just being away from home as much as I am, I am excited to just relax at the house and get a nice home-cooked meal. We are usually getting food from hotels or restaurants when I’m on the road, so it’s nice to have some of mom’s food when we are home.

Do you ever get a chance to cook when your at home? 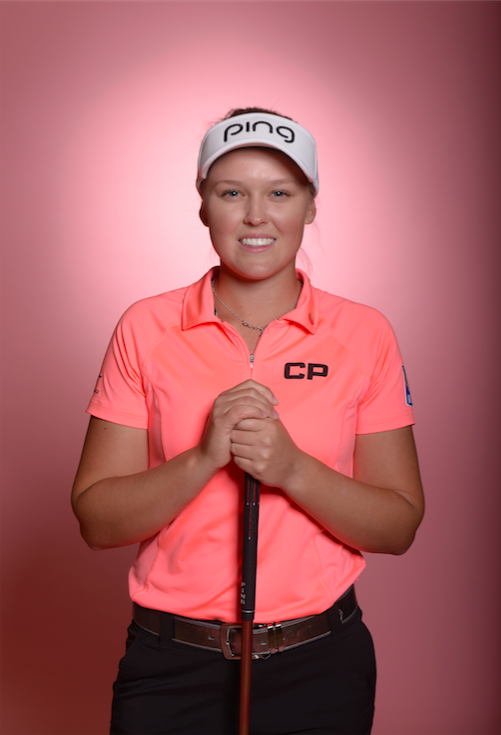 How important a role does your family play in your success?

I wouldn’t have had any of this success on the LPGA without them. I’ve got Brit who is not only my caddie, but she’s my best friend, navigator, and books all of our travel. Dad is not only my father, but he’s my coach and helps me make a game-plan for each week and how to handle the highs and lows. And mom is our biggest cheerleader and #1 fan.  Without them, I know I wouldn’t be here!
Before you got into playing golf more seriously, you were also a goalie in hockey. Are you a big fan of hockey? If so, do you get to see many games when you are in town? Who are some of your favourite players on the Senators?

We have had a great relationship with the Sens ever since I turned pro. It’s been really fun and I typically try to go to their games whenever I can or even if they’re in town wherever I am travelling. It was great—a few of them came out and played in my pro-am at the CP Women’s Open. Alfredsson was great and hit it a long ways! And of course, everyone loves Karlsson.

What was your dream job growing up? What would you think you’d be doing if you weren’t playing golf professionally?

I always wanted to be a professional golfer, but if I didn’t make it, I think I would have most likely been a teacher just like my parents.
What kind of music do you listen to? What is currently on your playlist?

I like all kinds of music but listen to a lot of Top 40 and some country.

Do you have a favourite concert you’ve ever been to—or an artist or band that you really want to see play live?

We have been lucky to see a few concerts at different tournaments around the world, but I’ve always really wanted to see Reba McEntyre – she’s been one of my favourite artists and actresses forever!

What is it like for you being a role model to so many young girls in Canada and around the world?

It’s such an honour to be able to play the sport that I love for a living, and if I can even just inspire one girl out there to pick up the sport, I am blessed to be able to do that. I try to act the right way on and off the golf course, and it’s been really fun to be able to help put a smile on people’s faces—even if it’s just with a quick autograph or pictures.
What has been your biggest challenge in your career this far?

Golf is the ultimate personal challenge—every week, you’re playing against yourself and the golf course.  The biggest challenge for me was turning professional without a card or a tour to play on, and navigating that life as a 16 or 17 year old trying to compete against the best players in the world on either exemptions or by playing my way into the events. Luckily, it has worked out! 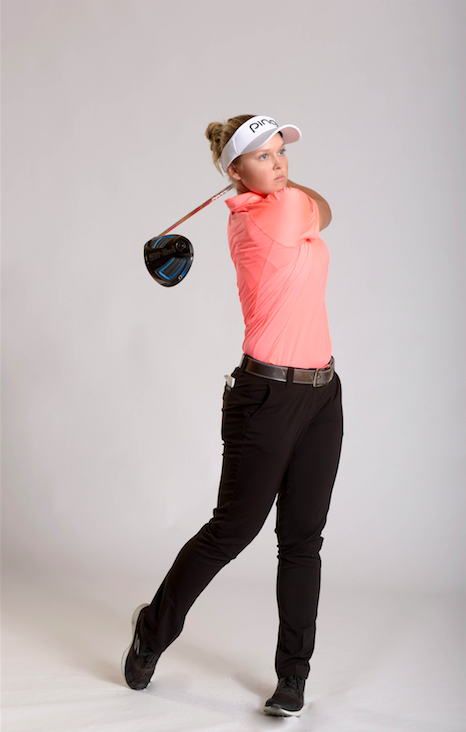 How old were you when you started to play?

I started to play when I was three and used to follow around Brittany who was an unbelievable golfer in her own right. My dad used to take her out and I would race around outside the ropes following her in tournaments and taking practice swings with a stick. I had no idea how good I could be, but I just keep trying to get better every day.

What is your favourite club to use?

Driver, for sure.
Tell us about what you have planned for this upcoming winter. Is there anything you’re really looking forward to coming up?

Nothing crazy, just looking forward to coming home and splitting time between Naples and Smiths Falls. We have a new condo down there but I haven’t been in it at all this season, so I need to decorate it and get it all set up!

What advice would you give a young woman reading this who wants to follow in your footsteps. Is there something you’ve learned over the last few years that you wish you’d be told when you first started out?

My advice to any amateurs, and particularly young women, is to remember that golf is just a game and to have fun. I started playing this as just a game, and even though it is my job now, I still treat it that way every day.  And even though I am a professional, there always will be a part of my game that can improve—that is the beauty of golf! 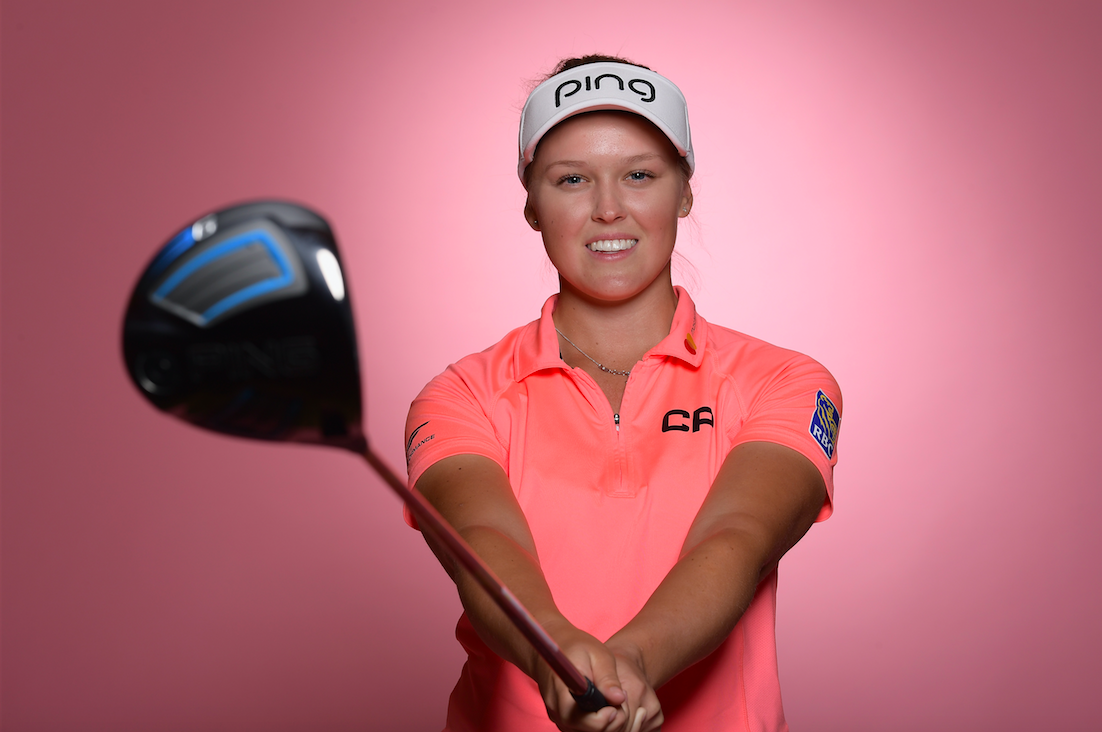