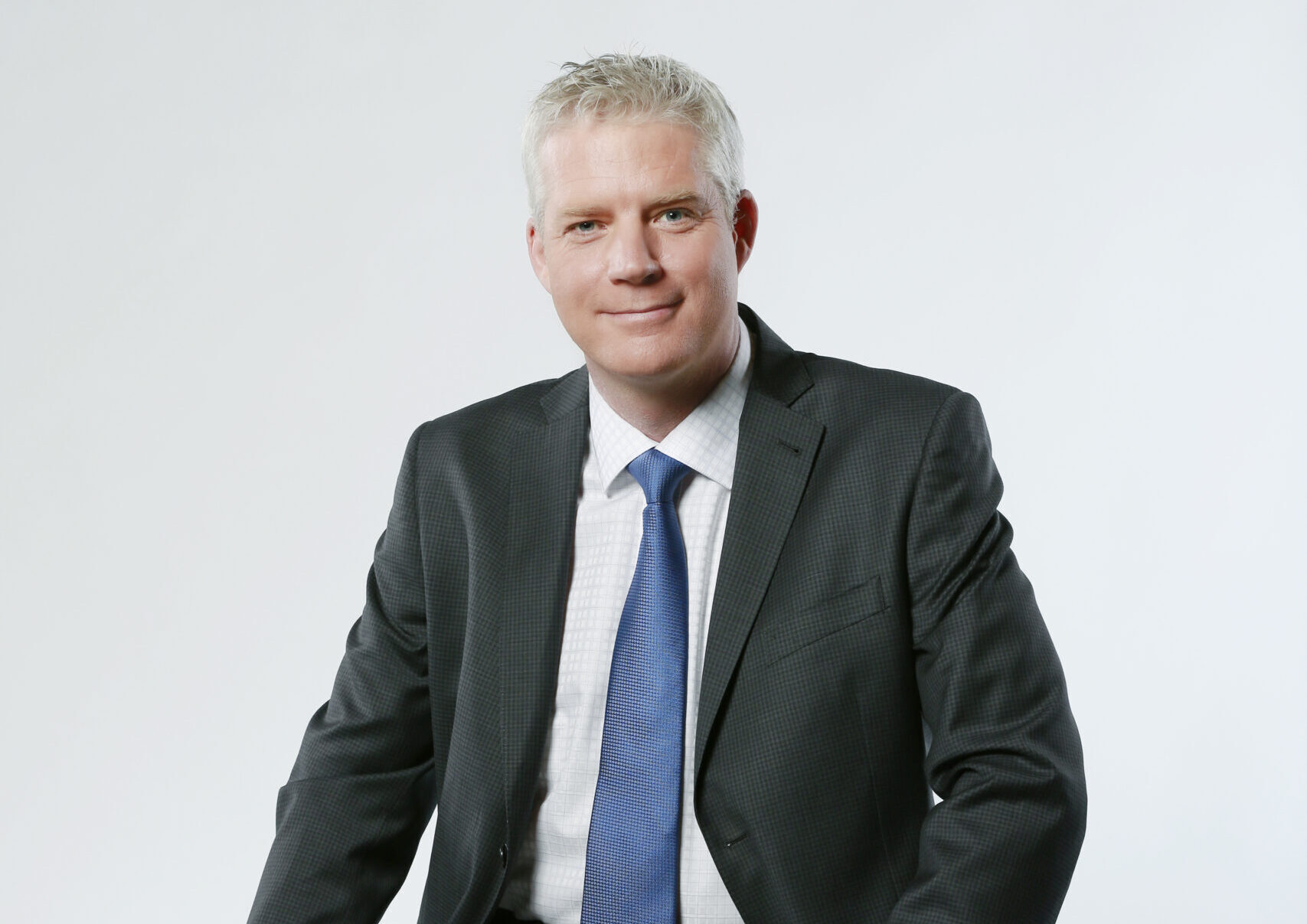 Ian Black has been with CBC as a weather reporter for almost 35 years. In that time, he has delivered countless forecasts to households across Ottawa.

Unlike many weather reporters in Canada, Ian comes from a science background, and is a certified broadcaster with the Canadian Meteorological and Oceanographic Society.

His passion for weather has always made him a popular figure with friends and colleagues. Today, Ian has over 240,000 followers on Twitter, who regularly engage with him to ask about upcoming forecasts and strange weather events.

We caught up with Ian to hear about his journey to becoming CBC’s on-air climatologist, his life off the screen, and his best advice.

I was born and raised here in Ottawa, I’m a child of the ’60s. I grew up in what you would call an upper-middle-class neighborhood. It was between Baseline and the Queensway, called Graham Park. It was the kind of neighborhood where you’d walk to school and walk back for lunch at your own house. I was the last of four children. Dad was a high school principal, mom was a nurse.

Do you have any memories growing up or any special places in Ottawa?

Ottawa is such a wonderful city to grow up in. I remember my summers were split between going to camp out of town near Algonquin Park, and my cousin’s cottage up to the North in Lac-Sainte-Marie. I look back very fondly on my childhood and I was very fortunate to have that.

What I remember the most about growing up in Ottawa is that feeling you get when you’ve been gone for a while as a child, and you come back and see that first glimpse of the city skyline. You just get this feeling like, “I’m home, I’m back.”

You are a self-proclaimed weather geek, and were fascinated by weather as a child. Tell me about the moment you knew that this wasn’t just a phase. When did you know that you actually wanted to pursue meteorology as a career path?

I remember sitting on the front porch with mom watching the thunderstorms, then going into the library and coming back and saying, “Mom, we shouldn’t be doing this, it’s not safe.”

When it was time to go to school, I was accepted into the Department of Physics at the University of Waterloo. I was also accepted into the School of Architecture, which was apparently a big deal and I didn’t know it, so I said, “Ok, I better try this.” But it wasn’t my love.

Fortunately for me, in a strange twist of fortune and fate, that School of Architecture at the University of Waterloo was within the Department of Environment, which is just brilliant. Most schools would lump it in with engineering, but not at Waterloo. I thought it was such a neat idea to have the school of Architecture as part of the Department of Environment.

The Department of Environment had a huge, brand new, I’d almost call it a supercomputer… because it took up a whole room. I became interested in things like satellite imagery and remote sensing, but it wasn’t until my third year in the co-op program there that I found my place.

I saw a local news show and I thought to myself, “That was the worst weathercast I’ve ever seen in my life!” It was awful. The fronts were backward.

It was a real ‘eureka’ moment for me. I said to myself, “I can do that, I can help.” I wanted to go from station to station across Canada, and maybe even into the States and improve their weather reporting.

I went to one station, CTV, and spent a couple of months there, helped them out, and went to the next station, which was CBC.

Back in the day, you’d come out of the field of broadcasting to do weather in Canada. It wasn’t like in the states, where you were technically a Meteorologist or Scientist. CBC had hired a broadcaster to do the weather, and I would help this person. I’d write the script, I’d get the graphics ready, and we’d do little stories on the weather. Then she left, and they hired me right on the spot and I’ve never looked back. I have been there since 1989, and with CBC for close to 35 years.

What do you think is the biggest difference between the person you were the day you walked onto the job, to now?

I didn’t come from the broadcasting field, I came from the science field. So in the beginning, I wasn’t the greatest storyteller or the best communicator.

I was, in that usual sense, kind of nervous at the beginning. I used to have this recurring nightmare where I’d be in front of the camera and they’d say, “Okay, you’re up in 30 seconds.” The red light, the guys ready to go, and in my dream I’d go, “Oh my God, I’ve got nothing. I’m not ready, I haven’t researched anything.” It was the same feeling you’d have in school when you had an exam coming up.

Today, I could fill 2 minutes in my sleep, just talking about what the day was like today. At some point, being on live TV didn’t bother me anymore. I never had that dream again.

In the 90s, you had a program where you’d go to schools and talk to grade 5 students about the weather. Why was this such an important thing for you to do, and why is it important to teach this to young children?

It’s funny because I’ll be walking around downtown and someone will say, “Oh hey, you came to my school when I was in grade 5.”

It’s amazing how kids find what I do fascinating. It is a fascinating job. We used to have these open houses here at CBC, and one of the most popular spots was to play with Ian Black’s green screen and do the weather.

If I was able to find my childhood dream job, and if I can get anyone else interested in science or broadcasting or communications, or whatever their dream is, that’s the whole game.

You have an incredible following on Twitter, and have become not only a source for weather information, but a person that people can ask questions to and receive real answers in real-time. Do you enjoy this ability to connect with people directly about the questions they have?

We had an earthquake 5-10 years ago. It was on Twitter within seconds. It was on the radio within minutes, on the news at 6:00 PM, and it was in the paper the next day. Twitter is immediate, it’s the most apropos medium for weather, especially if there’s breaking weather.

In terms of the audience that I serve on Twitter, I firmly believe it’s a crucial audience for the CBC. I try to engage them as much as possible. Some people will say to me, “I’m going to Kingston today, what’s the forecast?” And if I have time I’ll do it. But more typically it’s someone saying, “Look at this phenomenon I saw in the sky! What is it?” And I’ll research it and get back to them.

I think one of the reasons I’m quite successful on Twitter is because I spend the time. And it takes a lot of time… you’ve got to listen to what people are saying, listen to what they’re asking, and realize what it is they want out of your forecast.

What do you think this winter has in store for us, weather-wise?

I find talking about the weather tomorrow is a pretty difficult, sometimes complex field. There are some pretty sophisticated technologies involved. But there are medium-range forecasts and there are what you would call long-range forecasts, which would be talking about the upcoming winter. I don’t bet the farm on these things, and I wouldn’t bet money on it.  But I would suggest that this winter looks like it’s going to be a milder than normal winter. You’ll get days where it’s cold, you’ll get cold spells, but on average when you look back on it you will say, “Wow, that was a milder than normal winter.”

I think it will be what you would call an active winter, so you’re going to get frequent storms. Now whether or not they’re going to big snowstorms all the time or a mix of snow and rain… you know, this is Ottawa. We get freezing rain a lot, other than St. John’s Newfoundland you get freezing rain here in Ottawa more than anywhere else. So I suspect we will get a little bit of freezing rain, which is my least favourite.

You’re a hockey dad. What is one of the biggest lessons that parenting has taught you?

Tough question. Being a hockey dad had a lot of early mornings when the kids were younger. Both my kids played competitive – my daughter still does.

So you’re a very busy person, but you want to be there for your kids. The biggest lesson parenting has taught me is I want my kids to be able to tell me anything. I don’t want them to hide anything from me. On the other hand, I don’t think they need me to be their friend, I have to be Dad.

What are you looking forward to most in the new year?

I’m really looking forward to being able to go for drives with my mom. We used to do that an awful lot and I’m a big explorer. I like getting up there and seeing parts of our region I haven’t seen before. Of course I bring my camera along. My mom comes from a generation where, you know, they didn’t have a car. It was a treat for them when their uncle came over and took them for a ride in the car. So she just loves it and it’s relaxing for me. I don’t have two hands on the wheel, all stressed out, trying to get to work fast.

What is your best advice for anyone looking to achieve what you have: a sustained and successful career doing what you love?

Well, my dad would tell me as a kid and I still remember, “Find something that you love, work hard, stay in school, find your dream, and do it.”