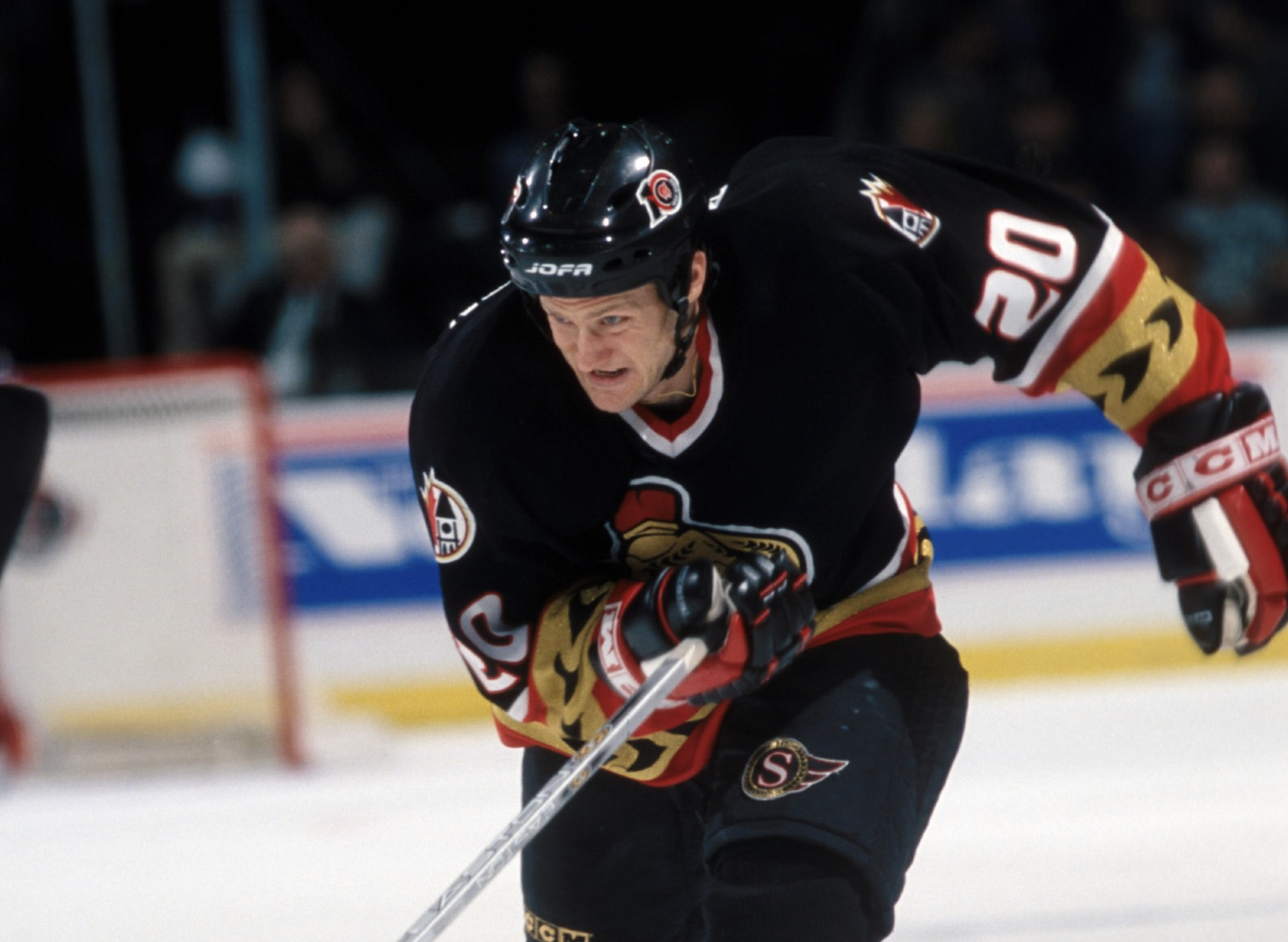 The modern-day Ottawa Senators began to get their first real taste of NHL success in the late 1990s. A key member of that club for six seasons was forward Magnus Arvedson – affectionately known as “The Machine.” Arvedson, now 48, is fifteen years into a happy retirement, enjoying life as a hockey dad in Sweden. “Arvie” has very fond memories of his time in the NHL, and living in Canada’s capital.

What are you up to these days?

Other than being a cab service for my sons, and an expert in doing dishes and vacuuming? I’m the strength and conditioning coach for Färjestads BK Junior teams (J20 and J18) and I’m also involved in the U16 elite team.

Your sons – Adam and Calle – both play hockey with Färjestads BK. How are you enjoying being a hockey dad and coach?

It’s great. I’m pretty relaxed. I’m never the dad who’s up in the stands shouting and screaming. I do give them advice and sometimes they actually ask me what I think! As their coach, it’s always been about the team; no playing favourites and I think that’s good – so I never gave my sons extra ice time or power play time. In fact, I maybe pay attention to the team too much. Sometimes, when I’m coaching in the gym, I get so focused on the whole group that sometimes I wake myself up and check if Adam (my oldest) is here.

Let’s take a look back at your career. You were 25 years old when the Senators drafted you. What’s the story on how the Senators discovered you and why you were drafted at such a late age?

I would say it all worked out okay.

By that age, had you given up on being drafted in the NHL?

I’ll be honest and say I never thought about the NHL when I was young or at the age when players usually get drafted. But, of course, I was following the league!

You played with the Ottawa Senators from 1997-2003? What would you say is your greatest memory from those years?

The guys; my teammates. It was such a down to earth organization. We were a small club that played great hockey. We progressed every year and got better and better and better! The Sens have had some great teams, some great runs, and not just in the years I was there.

The memories: Game 7 of the Eastern Conference Final; being on the ice with Wayne Gretzky for his last game in Canada; Saku Koivu’s comeback game after his cancer; the great places we went with the team; the locker room, the staff around the team, the dinners with the boys and much more!

I also remember all the nice, great people I met in Ottawa. My wife and I always said that it would have been great if our kids could have grown up in Canada and learned that easy-going friendliness people have over there. 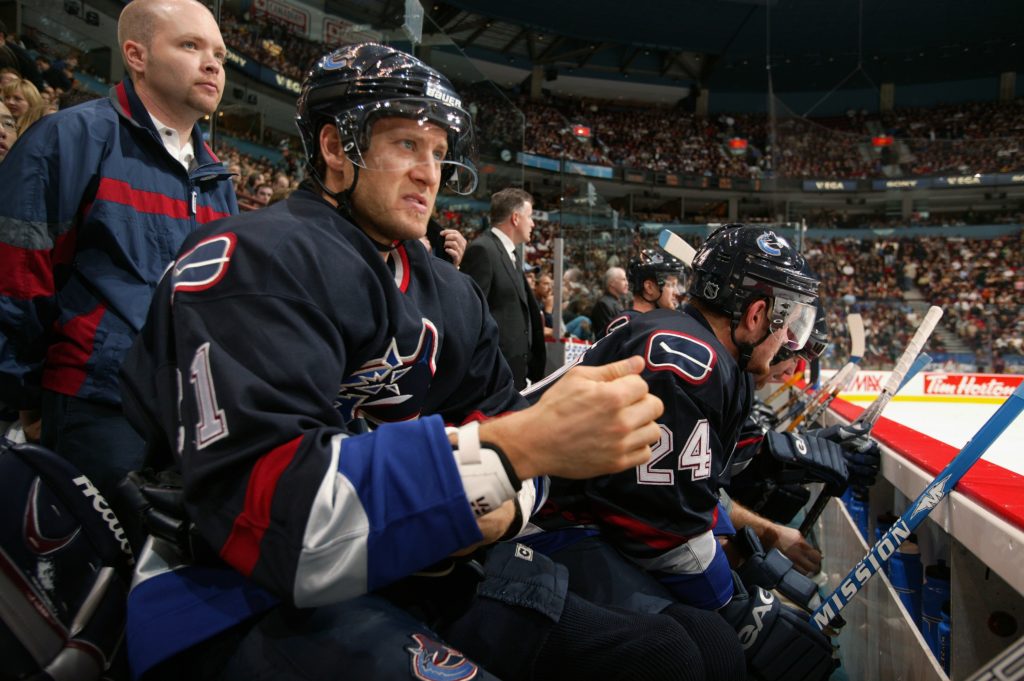 Let’s talk about that playoff game. Game 7 of the Eastern Conference Final in 2003. What do you remember most about that series?

I think that we gave away two games too easily to the Devils in that series. In Game 7, I remember scoring early to give us a 1-0 lead. I also remember that, later on, I passed up a great chance to score (passing the puck instead) and maybe that would have put us up 2-0 in that game. I still think about what a great chance we had created for ourselves. I think about the atmosphere, the fans, and the hype in the city around the club. That was something really special.

That was also your last game as an Ottawa Senator. Did you want to re-sign with Ottawa?

Oh yes, I talked to my agent to try do get a contract in Ottawa. But that didn’t happen. The Sens wanted to go another way. But it worked out well with the Canucks.

In your time in Vancouver, you had a brief chance to play with the Sedin brothers in their early days. What was that like?

They are great people and, as everybody knows, great players. In the last 4 games of my career I was playing on the same line as them. In three of those games, I was named first star and scored 2 goals in each game. In the last game with them I blew out my knee, tearing both the ACL and MCL. Keep in mind, the Canucks had one of the best lines in NHL at that time with Markus Näslund, Brendan Morrison and Todd Bertuzzi. After a while, the coach played us as the first line.

We had a great team that season and could have really gone a long way if we didn’t lose Burtuzzi (suspended in the Steve Moore incident) for the playoffs (and maybe me, a little bit, because of my injury). The team was set up with two good, offensive lines and two hard-working checking lines, so we missed some key parts of that set up in the playoffs.

In January 2000, you got checked into an open bench door by a member of the Flyers. You not only missed the rest of the regular season but had to undergo emergency intestinal surgery. That must have been a difficult thing to get over, both mentally and physically?

I actually came back for playoffs that season, way too early. The club really wanted me to come back and, of course, I did too. My body was not ready. In the process of coming back too early, I damaged my groin and suffered with that for many seasons afterward.

My body gained over 20 pounds during the hospital stay, due to my injury and treatment. Then I lost that 20 pounds, then dropped another 20 pounds on top of that, all in one week.

I still have problems with my stomach due to that injury.

What was it like to play for Jacques Martin?

I like Jacques and we got along well. Now that I’ve done some coaching, you understand the pressure coaches are under. Jacques focused a lot on defence and the details, but we also scored a lot of goals too. We had a lots of speed and talent, maybe more than we understood. We should have believed more in ourselves.

My two favourite things that Jacques would say a lot: “Pay attention to details,” and “Bottom line.”

Looking back, early on, maybe he could have let us loose a little bit more on offence. The last year I played, we did make some changes and the D got more involved in the offence. That helped us a lot. It made our team better and harder to play against. Our defencemen started going on the offence more and that made us hard to play against. 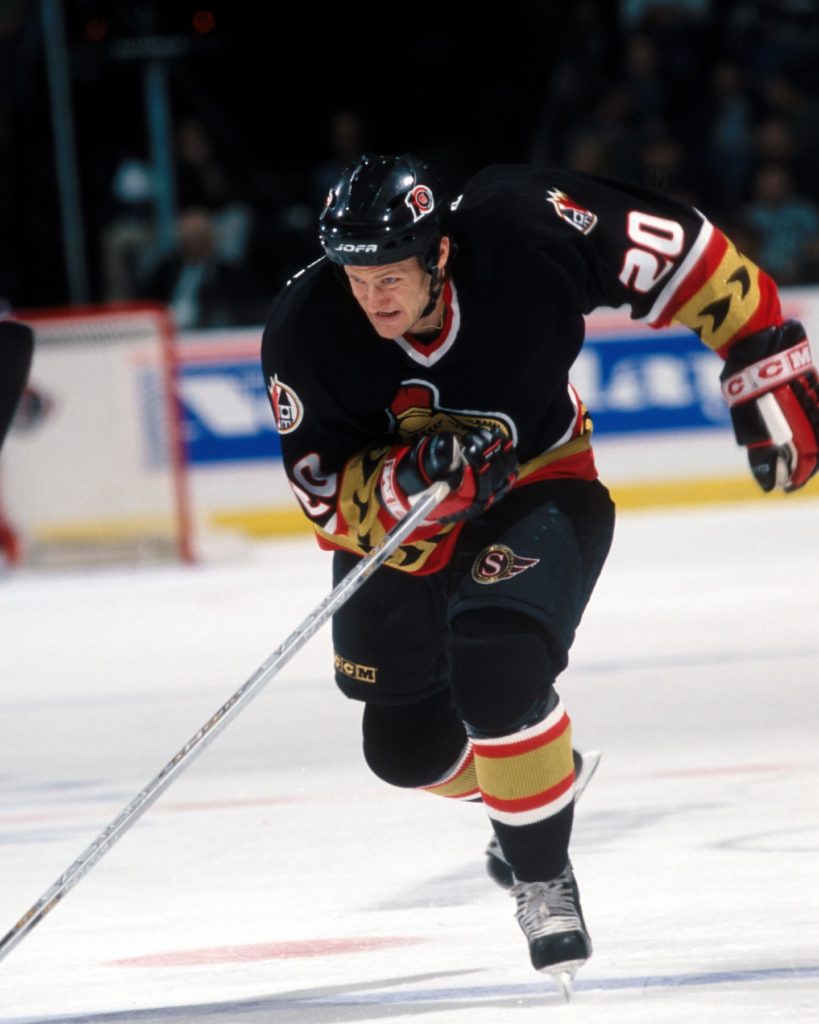 How did you get the nickname “The Machine” and who gave you that nickname?

Jacques gave me s*** at a team meeting and said that I should hit more. Then he said that, “You’re a F***ing Machine!” That’s where my nickname came from.

Your old teammate, Jason York says you ate a lot of bananas during games. If that’s true, what’s the story with that?

My junior coach told us a story about what a boost he got when he was running in a race and was totally exhausted. He said he ate some bananas and felt like a new man after that. After hearing that (laughing), I began eating bananas.

You represented your country in the 2002 Olympics. What was that experience like?

Unfortunately, I don’t remember so much about this special event as I should, which is too bad. Sweden had maybe one of the best games ever against Canada (5-2 victory in the first round) and then maybe one of the worst against Belarus (a 4-3 elimination loss in the quarterfinals). We played so well in the beginning of the tournament that many people thought of us as favourites and then it became a nightmare. Now you just don’t want to think about that tournament.

Which Ottawa Senators teammates were you closest to during your time here?

They’re a great bunch of guys, all of them. Me, my wife, and our oldest son, Adam were in Ottawa 2 years ago (for the alumni outdoor game) and it felt that we’d all been together only a month ago, but it’s actually been 15 years! It’s too bad we could not win something together; we were close.

Do you still keep in touch with any of your old teammates?

Ricard Persson and his family, Alfie sometimes through mail, Andreas Johansson I meet sometimes – same with Dackell. I talk to The LumberJack from Lloydminster – Wade Redden through mail sometimes, and Yorkie – Mr. Bean.

Do you still follow the Senators today or watch any of their games?

I’m glad that they’re doing better lately with the young team. I actually played with Erik Brännströms father here in Färjestad BK, Karlstad. I hope they can do something great with that team, and that people there enjoy and support them.