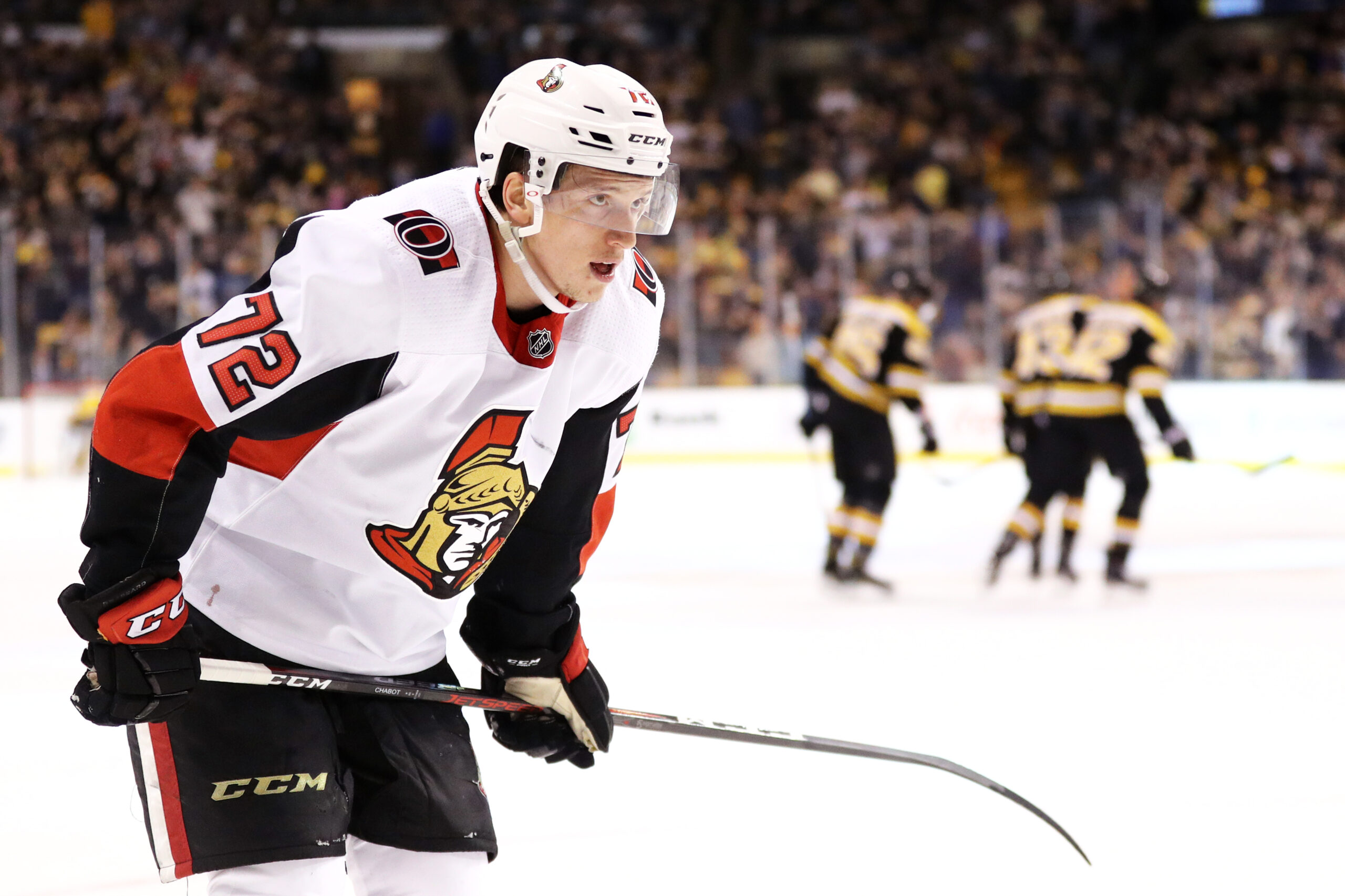 BOSTON, MA - APRIL 07: Thomas Chabot #72 of the Ottawa Senators reacts after Noel Acciari #55 of the Boston Bruins scored during the third period at TD Garden on April 7, 2018 in Boston, Massachusetts. The Bruins defeat the Senators 5-2. (Photo by Maddie Meyer/Getty Images)

“Tough start” doesn’t begin to describe how painful this has been for D.J. Smith as he begins his NHL head coaching career in Ottawa.

Maybe a better phrase would be “surgery without anesthesia”.

This is not a guy who’s been exposed to losing for very long. There were a couple of lean years when he was learning as an assistant with the OHL’s Windsor Spitfires but once he was hired as the head coach in Oshawa, his career took off, capped by a Memorial Cup win in 2015 and a ticket to the NHL to be Mike Babcock’s assistant in Toronto.

Babcock recently called him a “serial winner” when asked to comment on his former friend. There’s not a bigger compliment in professional sports, except maybe “trains with Gary Roberts in the summer”.

Smith was there for every tight corner of the Leafs transformation from serial losers into contenders as those sought-after draft picks began to turn into superstars.

When he stepped out on his own and accepted the head job in Ottawa, surely the notion crossed Smith’s mind that he was joining a franchise in a similar state of renewal. And he would have been right. This is a team headed for better days. Yet, coaches are still hardwired to win “right now”, and the Senators are nowhere near “right now”.

As Smith frantically chews gum behind the bench every night, his patchwork team of vets and entry-level kids work hard to try and score goals to no avail, and they can’t seem to cut down scoring chances against, a legacy item leftover from the Guy Boucher days.

It’s early, but both GM Pierre Dorion and Smith can’t be happy with what they’ve seen so far. They knew it would be a tough year and didn’t try to sugarcoat it to fans, but now it’s looking like this could be more of a brutal marathon than any of us expected.

Some fans and pundits have been telling us for months that this would be the ideal situation for the Senators this season. The main thrust of the idea is to finish in last place, develop the young players along the way and get that number one draft pick next June to kick the rebuild into higher gear.

It’s a nice theory, and even a plausible one, but there’s a few thorns.

Losing is like a pathogen. It tends to infect and spread into the culture of a team silently. Maybe no one drops dead on the team logo in the middle of the dressing room floor, but it’s in the air and it stays with players and coaches long after the arena lights go out at night.

Many organizations have successfully bottomed out in the past and come back without any permanent scars. Pittsburgh floundered for three years in the mid-2000’s and came back from the brink with Sidney Crosby and Evgeni Malkin. All three of Washington, Chicago and Los Angeles did similar rebuilds and won Stanley Cups.

Then there’s the Edmonton Oilers and the Buffalo Sabres. The same formula was applied with vastly different results. Losing became so ingrained in their culture that even generational players like Connor McDavid and Jack Eichel couldn’t will their teams to anything approaching sustained success. Maybe that changes this season (and the early results are promising) but how many careers did it malign along the way?

In the case of Buffalo, it was more egregious somehow. Former GM Tim Murray seemed to be openly tanking for McDavid in the draft and still ended up with Eichel as the consolation prize. The price was steep however, as the constant losing caused lingering grief for years. One of the team’s leaders, Ryan O’Reilly, claimed he lost his “love of the game” in Buffalo, only to rediscover it quickly once he exited and won a Stanley Cup last year in St. Louis.

Florida and Arizona have been rebuilding for what seems like a decade and neither franchise can seem to get over the hump. It always feels like they are one more year of development away, but those playoff wins never seem to materialize. It’s very easy for a GM to tear it all down. It’s another thing to build it back up the right way.

It’s something to consider for Ottawa management. Losing is inevitable this season, but what will be the lasting damage, if any?

Watching the body language of some of the younger players as another game slipped away in Dallas recently was disconcerting. Young defenseman Erik Brannstrom is getting run over every night by bigger, older forecheckers and can’t fight his way onto the first power-play unit where his skills would be best showcased. Right now, he’s looking up from the bottom of the mountain and may need to go back to the AHL to get his confidence back. This was not the plan when October was still fresh.

A few of the brightest prospects got off to rocky starts, which hasn’t helped Smith or Dorion sell the youth movement to a shell-shocked fan base. Logan Brown and Drake Batherson ended up in Belleville, as did Christian Jaros and Vitaly Abramov. Both Rudolfs Balcers and Christian Wolanin got hurt coming out of camp, allowing a few unheralded names like Scott Sabourin, J.C. Beaudin and Jordan Szwarz to make the roster at various points. It also forced to Dorion to make a trade for another vet in Vladislav Namestnikov just to give Smith a fighting chance to have some success in his inaugural year.

The Sens may be developing their youth, but they’re doing it in the AHL, which means there’s going to be another learning curve when they finally do get the chance in the NHL. The young players that remain in the lineup, like Brannstrom, Brady Tkachuk and Colin White are going to have to live with losing and all the fallout that comes with it.

Nobody should be worried about Tkachuk. Just watching him hack, bite and slash his way to the front of the net every shift is an indication that he’s not the type of personality to lose his “love of the game” anytime soon. Smith and Dorion will have to be careful with the others. Not everyone is born with the mentality of a wolverine. The fact they have kept some of their best prospects in the AHL to overcook probably signals they understand the dangers.

It’s a conundrum for the fans too. It’s become funny on Twitter to extol every loss as a “victory” for the rebuild, but that’s already getting a little stale.

Thankfully, the team has at times been entertaining in the early going. Tkachuk is a one-man gong show around the opposition net while Thomas Chabot gracefully controls the other end of the rink. Namestnikov and Anthony Duclair have shown flashes of skill and speed, while former Leaf defenseman Nikita Zaitsev has been better than advertised and looks capable of playing huge minutes for the next five years of his contract.

Just like rookie Erik Brannstrom, Ottawa fans are at the bottom of this mountain looking up, wondering how this thing is going to be climbed. The coach’s answer would probably be “one step at a time” but he’s probably gone through more chewing gum than any human alive in just a month. The stress is palpable.

So just how does a “serial winner” balance the need to win and lose games all at the same time? Let’s just say he’s still figuring that existential equation out.