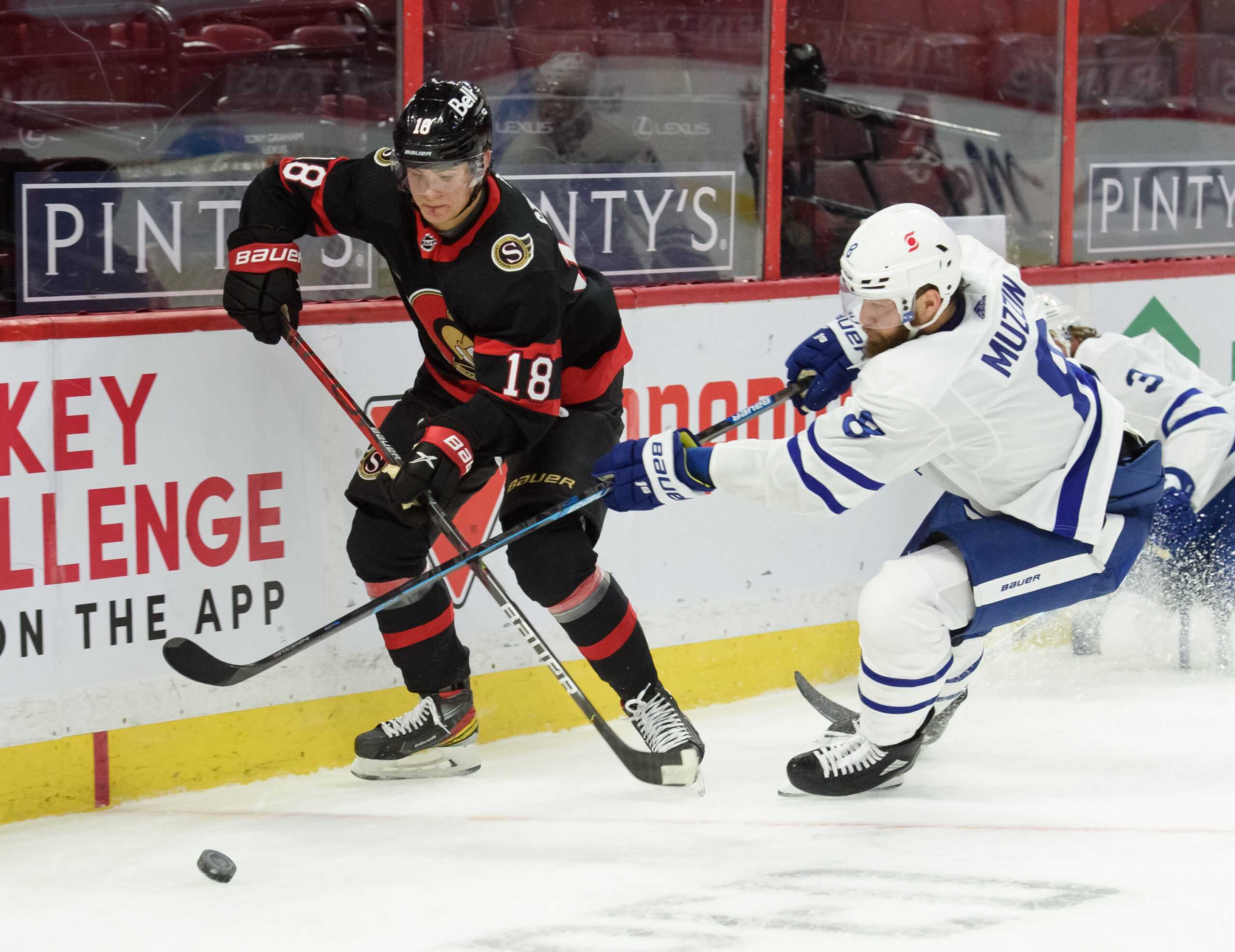 It was a tough night for the Sens as they were beaten by Toronto 3-2 on the second half of their back to back. In contrast to the dominating form they showed the night prior, Ottawa was out-performed for most of the game, giving up 40 shots while only getting 19 of their own.

The Senators jumped out to an early 1-0 lead when Nick Paul scored on a Nikita Zaitsev point shot that deflected off of him in front. The lead was short lived however, as Joe Thornton tied it four minutes later with his first as a Leaf. Marner added one in the second, and Matthews made it a 3-1 lead for the Leafs three minutes into the third period.

Stützle brought the game to within one with his first career goal, and was it ever a special one. He received a bouncing cross ice pass from Chabot and rifled the one-timer right between Campbell and the post.

Another look at the first goal of Tim Stützle's career! #GoSensGo pic.twitter.com/w3WZQQnN0V

“It was a heck of a goal,” said Sens coach D. J. Smith in his postgame press conference. “You could see how excited he was to get out there. He’s gonna be a special player in time, it’s great he gets that out of the way for himself.”

Stützle’s response when asked about his goal showed the maturity and competitive drive the 19-year-old has. “It was definitely a great feeling,” said Stützle, “but in the end I wanted to come out with the win.”

The Sens had an opportunity to tie the game when Zach Hyman was called for high sticking with 7:33 left to play, but they failed to capitalize. The powerplay was an issue for the Sens all game, going 0/5 on the night. The Leafs had four chances of their own, and managed to capitalize on one of them, which proved to be the decider.

Even though they lost, new Senator Matt Murray was incredible in his second start for the team. Despite playing the night before, he managed to stop 37 of 40 shots. This included a stretch where he made 10 consecutive saves while the Sens were short handed.

There was some speculation going into the season about whether Matt Murray could perform at the level needed after how he looked in Pittsburg. If the first two games of the season are any indication, Sens fans had nothing to worry about. He looks to be in top form, even when the team in front of him isn’t.

Despite the loss, the opening series against Toronto showed a lot of promise for the Senators. They dominated the first game, and kept the second close, proving they can compete with anyone on any given night. As the season goes on and Ottawa’s young core continues developing, they will definitely be a headache for any team that faces them.

One of the brightest signs for the future is how willing the team is to make the less recognized plays, the ones that don’t get you a pat on the back by fans. With 21 blocked shots, it’s clear this team is willing to sacrifice and play unselfish hockey.

The Sens will look to carry these strong performances through their two day break, before being back on the ice to take on the Jets at 7:00 pm on Tuesday in Ottawa.