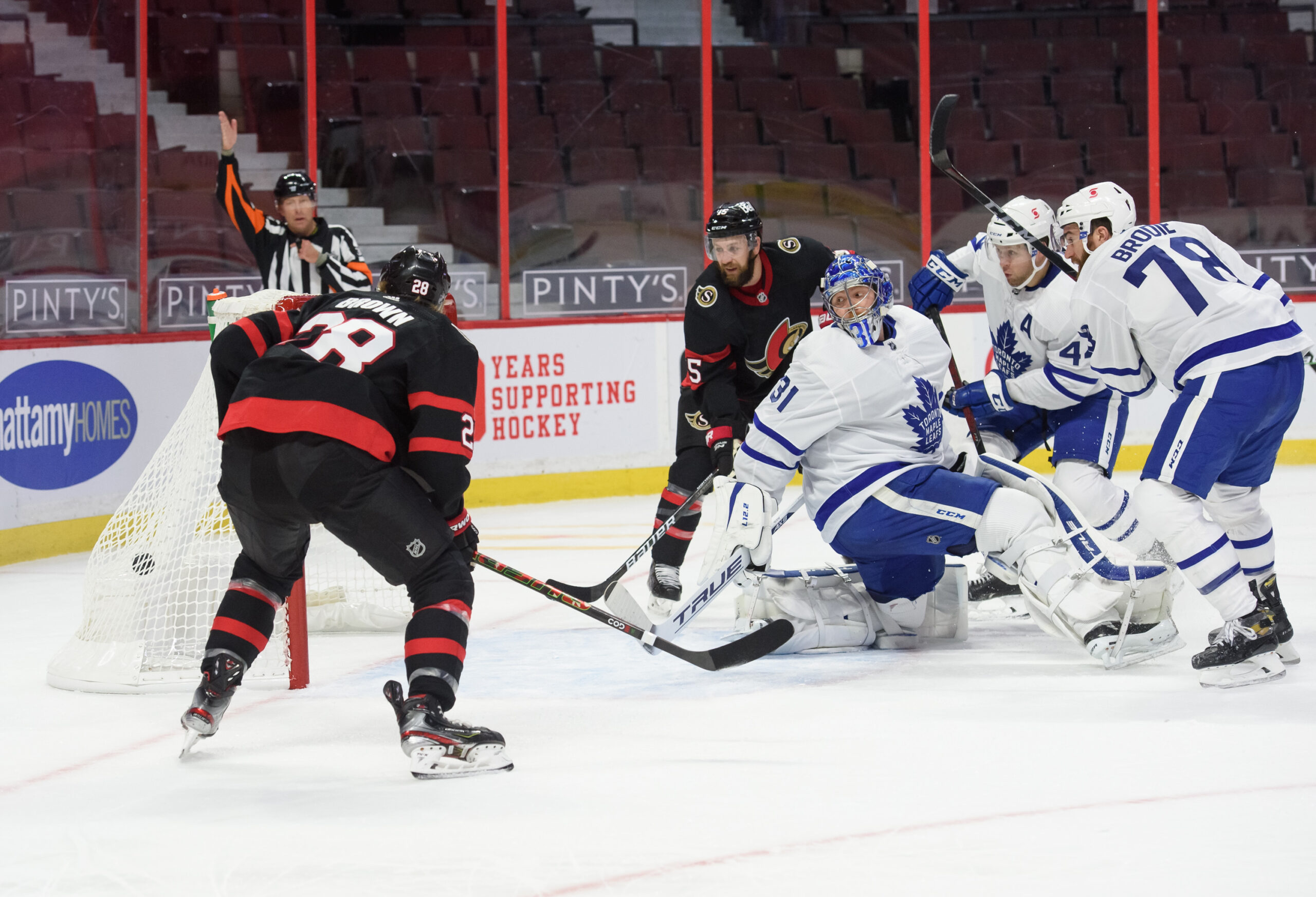 OTTAWA, ON - JANUARY 15: Frederik Andersen #31 of the Toronto Maple Leafs concedes a goal to the Ottawa Senators at Canadian Tire Centre on January 15, 2021 in Ottawa, Ontario, Canada. (Photo by Matt Zambonin/Freestyle Photography/Getty Images)

Not only is today the 19th birthday of Senators potential Rookie-of-the year, Tim Stützle but today also marks the home opener for the Ottawa Senators 2021 season. After finishing near the bottom of the league last season, the Senators are looking ahead to better things with a younger roster. The longtime rival, Toronto Maple Leafs were in town looking to improve on their 1-0-0 start after a 5-4 overtime victory against the Montreal Canadiens last Wednesday night. During the pregame coverage, both teams took a moment of silence to honor the late Jeopardy host/devout fan Alex Trebek and the late former Senators General Manager, John Muckler. Once the national anthem was preformed, it didn’t take long before the puck was dropped and the battle of Ontario commenced.

The Senators took a couple of penalties early on in the game. They were able to successfully kill off the first one (Stepan – Delay of Game) but it was the second penalty (Paquette – Holding) that the Leafs capitalized on. Zach Hyman opened up the scoring by batting in a high rebound off of Murray. Before the end of the first period, the Sens willed their way back in after several bad Leafs penalties. A high stick by Joe Thornton and a too many men penalty resulted in a 2 man advantage. With 43.5 seconds left in the opening period, Thomas Chabot fired a shot off a feed from Drake Batherson to tie the game.

First goal of the season belongs to @ThomasChabot1! #GoSensGo pic.twitter.com/Wo75WazQYi

During the second half, the Leafs continued to apply the pressure spending most of the first half in Ottawa’s zone. The buds reclaimed the lead at the 10:45 mark with a goal from Alex Kerfoot but not for very long. The Senators bounced back late in the second with three unanswered goals. At 9:32, Brady Tkachuk tied the game by deflecting a shot from former Leafs defenceman, Nikita Zaitsev. Shortly after, Austin Watson (who was acquired from the Nashville Predators last October) would give the Senators their first lead of the game by putting them up 3-2. To add insult to injury, the Sens further asserted their dominance during a delayed Leafs penalty. With a six on five advantage, Chris Tierney  buried a rebound past a sprawling Frederik Andersen to give Ottawa a 2 goal lead at the end of the second.

By the start of the third period, the narrative had completely changed in favor of the Sens. A game that looked to be in control by the Maple Leafs had the reigns taken by a young and pesky Ottawa team. Both teams continued to exchange shots in each others zones but Ottawa looked to be past the rust and more focused on outworking their provincial rivals. At 12:53 in the third, John Tavares would give the Leafs some life again by scoring a power play goal after a slashing penalty taken by Austin Watson. Not long after, defenceman Erik Gudbransson almost put the game out reach but Andersen was able to jump in front of a wide open net. However, the Senators continued to take care of their own end and were able to close out their home opener with a final score of 5-3. On top of their win at home, the new look Senators can also feel good about out shooting (24-23) and out hitting (33-11) the Leafs.

Tonight’s game gave us a good look at how the season may play out for the all-Canadian Northern division. With these teams facing each other much more frequently, don’t be surprised to see more tensions and scrapping between these teams. At the end of the game, it appeared that both clubs had some words for each other. Expect that same energy to carry forward when the Leafs return to the Canadian Tire Centre tomorrow night for a rematch at 7:00 P.M. Eastern Standard Time.