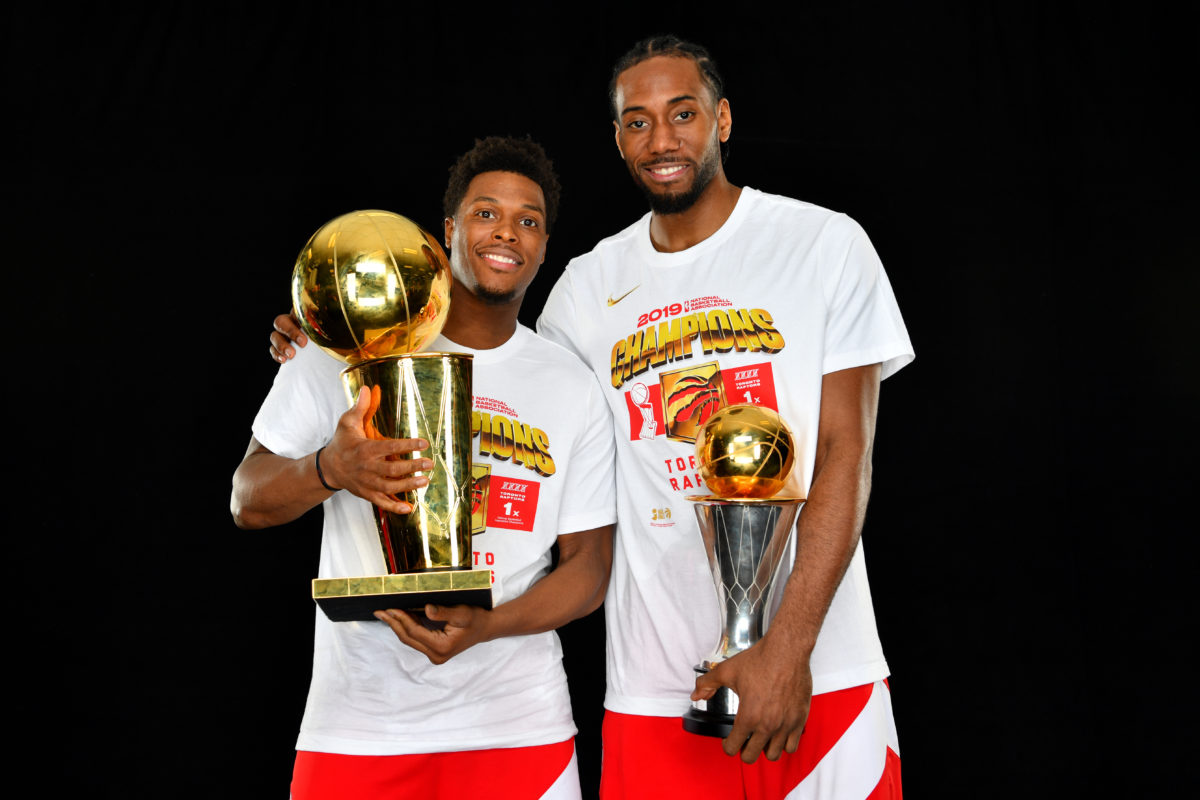 OAKLAND, CA - JUNE 13: Kyle Lowry #7 and Kawhi Leonard #2 of the Toronto Raptors pose for a portrait with the Larry O'Brien Trophy after winning Game Six of the 2019 NBA Finals against the Golden State Warriors on June 13, 2019 at ORACLE Arena in Oakland, California. NOTE TO USER: User expressly acknowledges and agrees that, by downloading and/or using this photograph, user is consenting to the terms and conditions of Getty Images License Agreement. Mandatory Copyright Notice: Copyright 2019 NBAE (Photo by Jesse D. Garrabrant/NBAE via Getty Images)

The Toronto Raptors’ 2019 NBA Championship win wasn’t just a statement of intent for Canadian teams in the sport – it could also have a huge impact on the wider state of basketball for seasons to come.

Sport is, has, and always will be an arena in which tribal loyalties play a huge factor. Was the most surprising element of the Toronto Raptors’ NBA Championship win, then, that despite their supposed status as an ‘outsider’, the Raptors were the preferred victors for every state bar California, Nevada and Hawaii? Or that 10% more Canadian men and 3% more Canadian women would have taken watching the climax of the basketball season over the Stanley Cup? 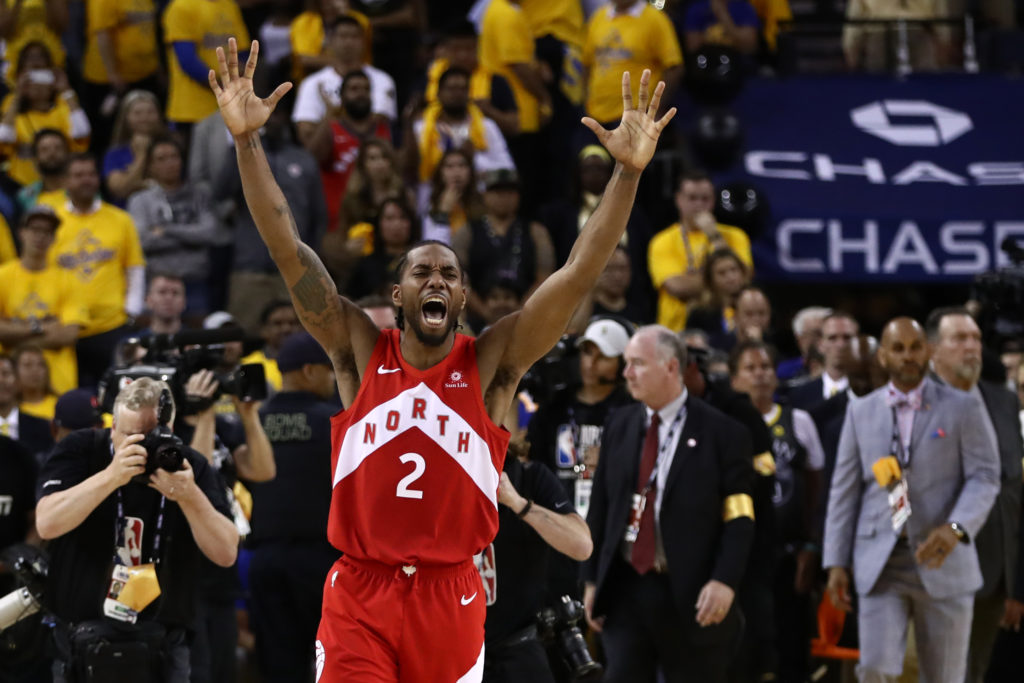 OAKLAND, CALIFORNIA – JUNE 13: Kawhi Leonard #2 of the Toronto Raptors celebrates his teams win over the Golden State Warriors in Game Six to win the 2019 NBA Finals at ORACLE Arena on June 13, 2019 in Oakland, California. (Photo by Ezra Shaw/Getty Images)

In many ways, the Raptors win was a tour de force in sporting globalism – not just limited to North America. No matter where you are from – what country, race, religion – we came together in support of this team. We celebrated the victories together, and we mourned the losses together.

This win was a huge boost for Toronto basketball fans, whose last major sporting triumph came in 1993 courtesy of a Blue Jays World Series. All of Canada joined in on the excitement as fans across the country couldn’t help but love seeing our team go from plucky underdogs to world beaters. 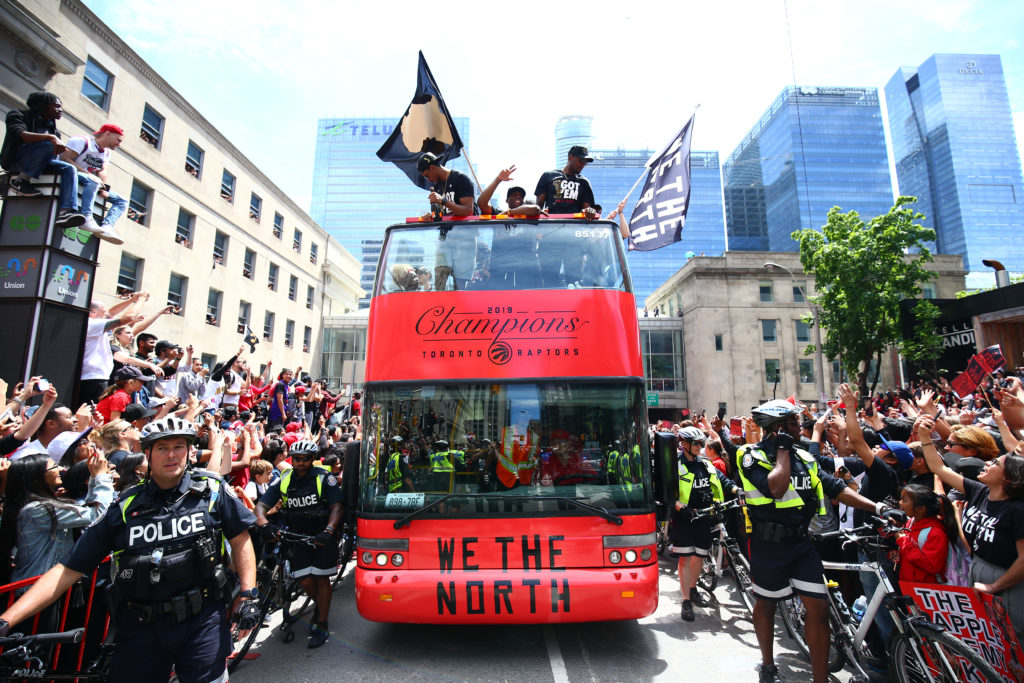 Perhaps it was this spirit that allowed us the freedom to take risks like the dismissal of former Coach of the Year Dwane Casey for unproven assistant Nick Nurse. Or the blockbuster trade that saw Raptors devotee DeMar DeRozan shifted out to San Antonio as a makeweight in the deal to bring Kawhi Leonard north of the border. Controversial decisions at the time, both proved crucial to the Raptors’ eventual success – would an established American team have had the chutzpah necessary to make such bold calls?

“Just being able to win this championship this year is just something special for me because you know how last year everybody was looking at me, and I stayed true to myself, and I had a great support system,” Leonard said. “And once I got here to Toronto, they understood everything and kept moving from there.” 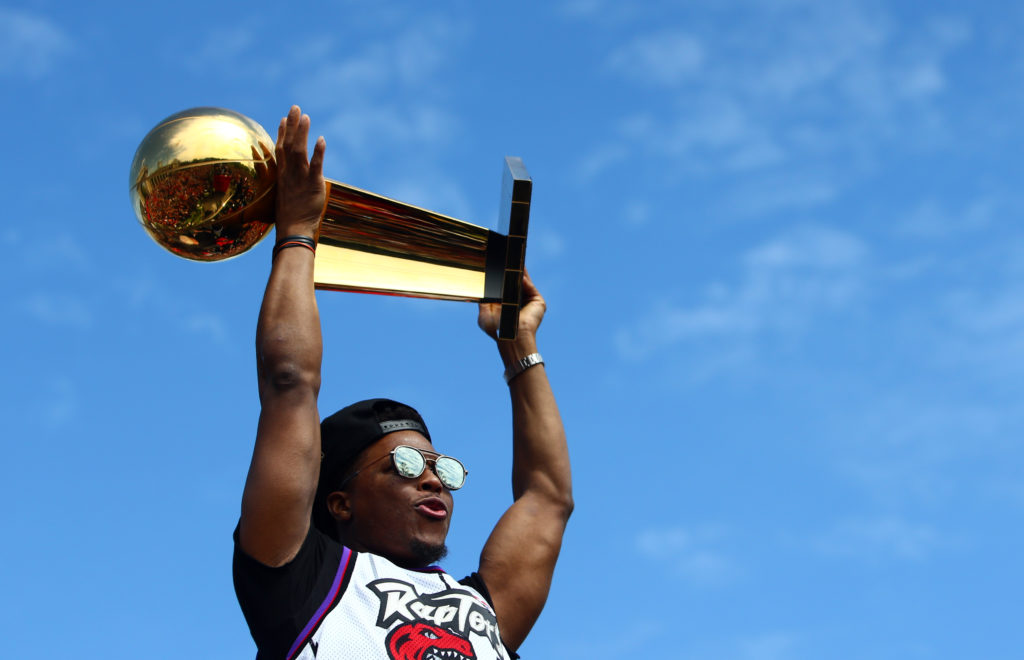 For all of the excitement generated by Leonard on the court, away from the sport the 27-year-old remains a deeply private individual, eschewing social media entirely. Having been called in turns both “selfless” and “understated” in spite of his prodigious talent, he and the Raptors, and, in former GM Glen Grunwald’s words, the “Canadian humility” they showed in their journey to the final, was a match made in heaven. 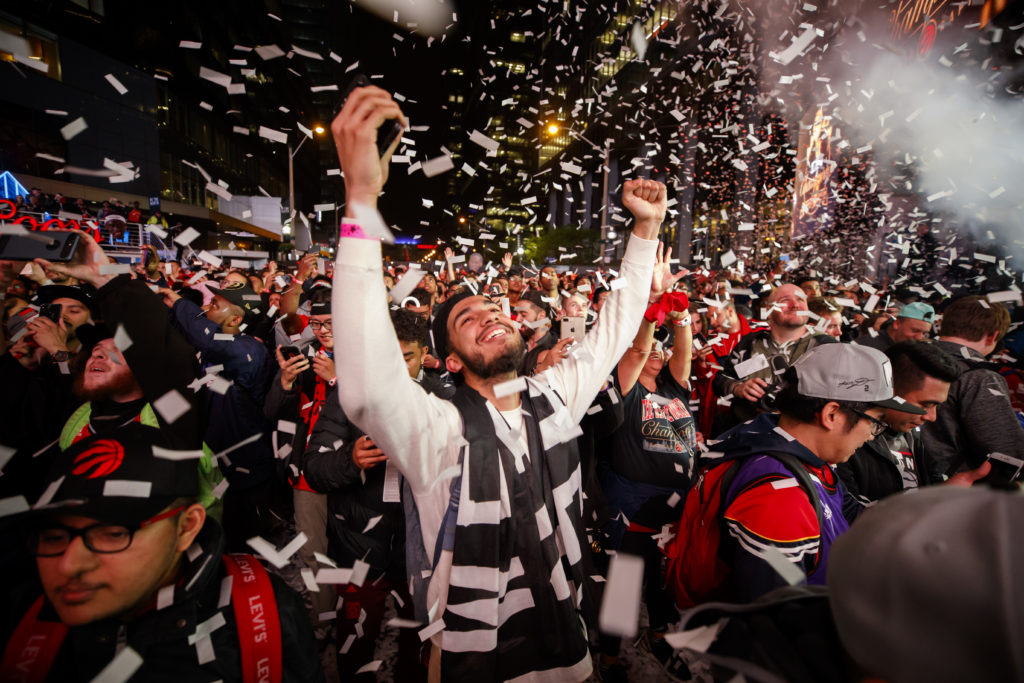 TORONTO, ON – JUNE 13: Toronto Raptors fans cheer after the Raptors defeat the Golden State Warriors in Game Six of the NBA Finals outside of Scotiabank Arena on June 13, 2019 in Toronto, Canada. (Photo by Cole Burston/Getty Images)

That being said, it was a short one. Leonard’s future was the biggest question mark in the NBA, and now Toronto finally has their answer. Leonard intends to sign with the LA Clippers on a four-year deal of $142 million. President Masai Ujiri had appeared something close to confident that their star player would stay – “I said we have to be ourselves, and we were ourselves for the whole year. I think he saw that. I think we built a trust there”. Should he have chosen to stay, The Raptors were able to offer him $190 million over five years. And now, the 6’ 7” small forward’s decision also has a significant impact on the future of end-of-contract teammate Danny Green, who is signing a two-year deal with The Lakers. The domino effect is likely to also impact Marc Gasol, who Toronto had acquired at the trade deadline.

“If it’s enough it’ll be enough and if it’s not then it’s not,” said Raptors guard Fred VanVleet on the ongoing saga surrounding Leonard’s future in Toronto. “We would love for him to be back. If he’s not, then we’ll move on…He did what he was supposed to do. He brought this city a championship and I think he’s earned the freedom to do what he wants.” 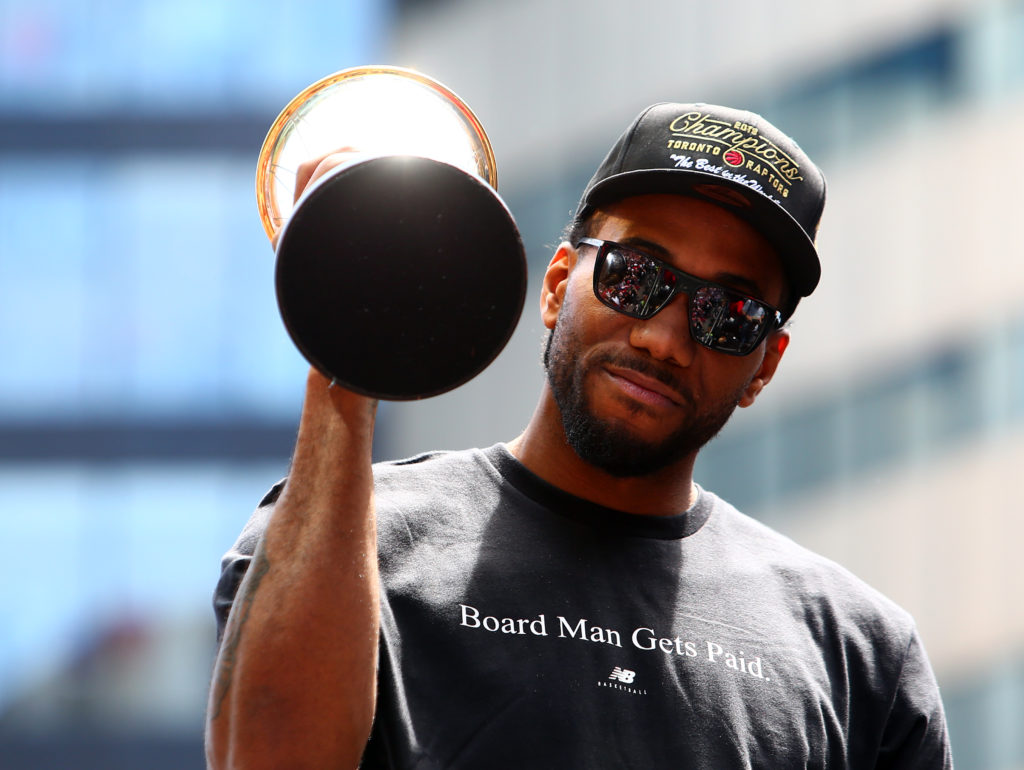 Leonard’s draft will also have a big part to play in this year’s off-season, too. Whatever the manner of DeRozan’s departure, in becoming the third person to win MVP in the finals with two different teams, walking in the considerable footsteps of LeBron James and Karem Abdul Jabbar, Leonard proved that a ballsy play for a big-time name in less than ideal condition can reap huge reward.

Smaller teams hoping to make an impact at the top can look to the Leonard trade, and while opportunities in the shape of players of Leonard’s calibre are seldom available, Toronto’s gamble could change the state of how lesser teams do business for years to come. 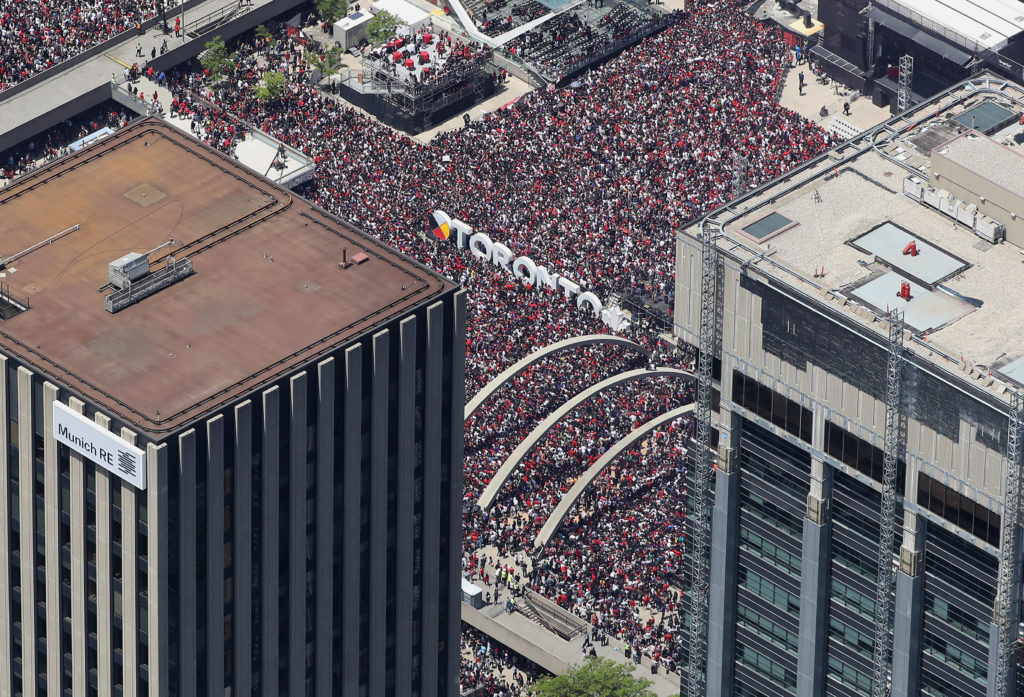 TORONTO, ON – JUNE 17: An aerial photo of fans as they gather at Nathan Phillips Square for the Toronto Raptors NBA Championship Victory Parade after defeating the Golden State Warriors in the Finals on June 17, 2019 in Toronto, Canada. (Photo by Tom Szczerbowski/NBAE/Getty Images)