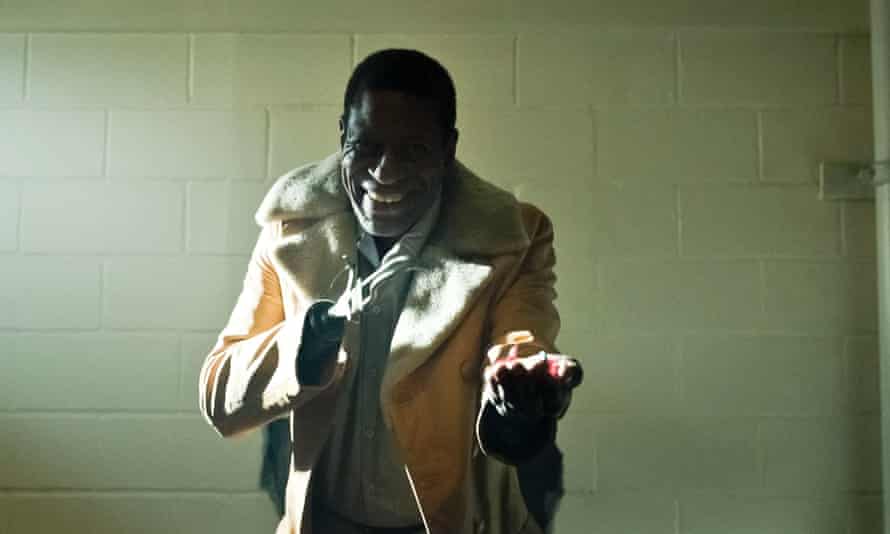 I rarely say this, but here it goes… I don’t get it.

That’s not an easy thing to admit, by the way. But no matter how hard I try, I do not understand Candyman. At least, not as a direct sequel to the first cult classic 1992 film.

The first film told the story of a supernatural being known only as Candyman (Tony Todd), who can be summoned by saying his name in front of a mirror five times. But, this little game comes at a price, as summoning him will have you on the wrong end of his hook hand.

Helen Lyle (Virginia Madsen), a graduate student researching urban legends, discovers the Candyman mythos and becomes instantly intrigued to the point of obsession. She finds that Candyman was actually a real African-American man who lived over a century ago.

He was a kind and talented painter who lived in a primarily white part of the country. While respected enough, he was still considered an outsider to the community due to his skin colour. However, he soon found himself smitten by a wealthy white socialite, and the two held a relationship, eventually parenting a child. Unfortunately, their kinship was ultimately revealed after the discovery of a painting he made of his love.

A mob hunted him down for his crimes, using an old saw to slice off his arm and, to add more insult to injury, covered him head-to-toe in honey. One young onlooker mentioned that it tasted like “candy.”

After his death, he continued to terrorize the neighbourhood’s people, which eventually became the Cabrini-Green housing projects bordering one of the wealthiest areas of Chicago. In the new Candyman, only a few abandoned buildings remain. Therefore, the mythos went away as just that; a myth.

This new Candyman, written by Jordan Peele and Nia DeCosta, tries to expand the story by adding some social commentary to the mix… or some “more” social commentary. Unfortunately, it feels like the addition of social commentary was more important to the writers than creating a proper Candyman sequel.

This time around, we focus on a different Candyman named Sherman Fields (Michael Hargrove). Back in the ’70s, he was known around the neighbourhood as the Candyman because he would always give the local kids candy from his jacket. Unfortunately, he was wrongfully convicted of tampering the candy with blades, leading to his untimely death at the hands of the police.

Once painter Anthony McCoy (Yahya Abdul-Mateen II) hears the legend of the Candyman, he becomes obsessed, and brings this obsession to life as his latest art project. This is actually one of the more creative aspects of the film, mirroring the talent of the original Candyman, almost coming full circle.

Unfortunately, not much is done with this addition, and the film starts to go downhill for me. Probably my biggest question coming out of this movie was, “Why was this a sequel?” It’s clear that this version of the character is supposed to be an allegory for violence against the black community by white authority figures. So, why change the story?

The original film already had a perfectly laid out origin with the exact same message. In all honesty, this new film just flubs up the narrative, making it somewhat unfocused.

The biggest problem coming out of this film is the continuity.  While the socio-cultural themes of the first film are present, discussed, and even painted by the main character, they seem to be a bit disconnected, removed from the original story. And, despite being a direct sequel, this film both somehow recognizes and forgets Helen Lyle all together.

After stealing an infant at the end of the original film, the Candyman tries to make a deal with Helen. If she helps him strike fear into the people of Cabrini-Green’s residents, he’ll release the baby. She ultimately turns him down and sacrifices herself to save the little one, in the process destroying the original Candyman.

However, the ending reveals that Helen becomes the new Candyman, getting revenge against those that wronged her in life. Well, they decide to completely retcon this ending because Tony Todd makes a brief cameo as the original Candyman, and Helen is never shown to be part of the myth anymore.

And if we’re throwing logs on the fire, the film isn’t very scary either. Granted, they do a lot of interesting things with how they shoot Candyman in the mirror. Sometimes, it can even be downright creepy. But, whenever someone is killed on-screen, it quickly goes from creepy to silly.

This is because you only see the Candyman in the mirror, except for the rare times he decides to appear in the real world. Victims are thrown around like a ragdoll whenever they’re killed, and it just looks a tad ridiculous.

This was proven… whenever someone was killed in this movie, the audience I was with started laughing. Not quite the reaction you expect from a horror flick.

So, all-in-all… I just don’t get this movie. This could’ve worked well as a standalone reboot of the franchise with some minor rewrites. But unfortunately, the film instead tries to outshine its predecessor rather than compliment it, and in doing so, muddles the legacy. And that’s pretty disappointing.