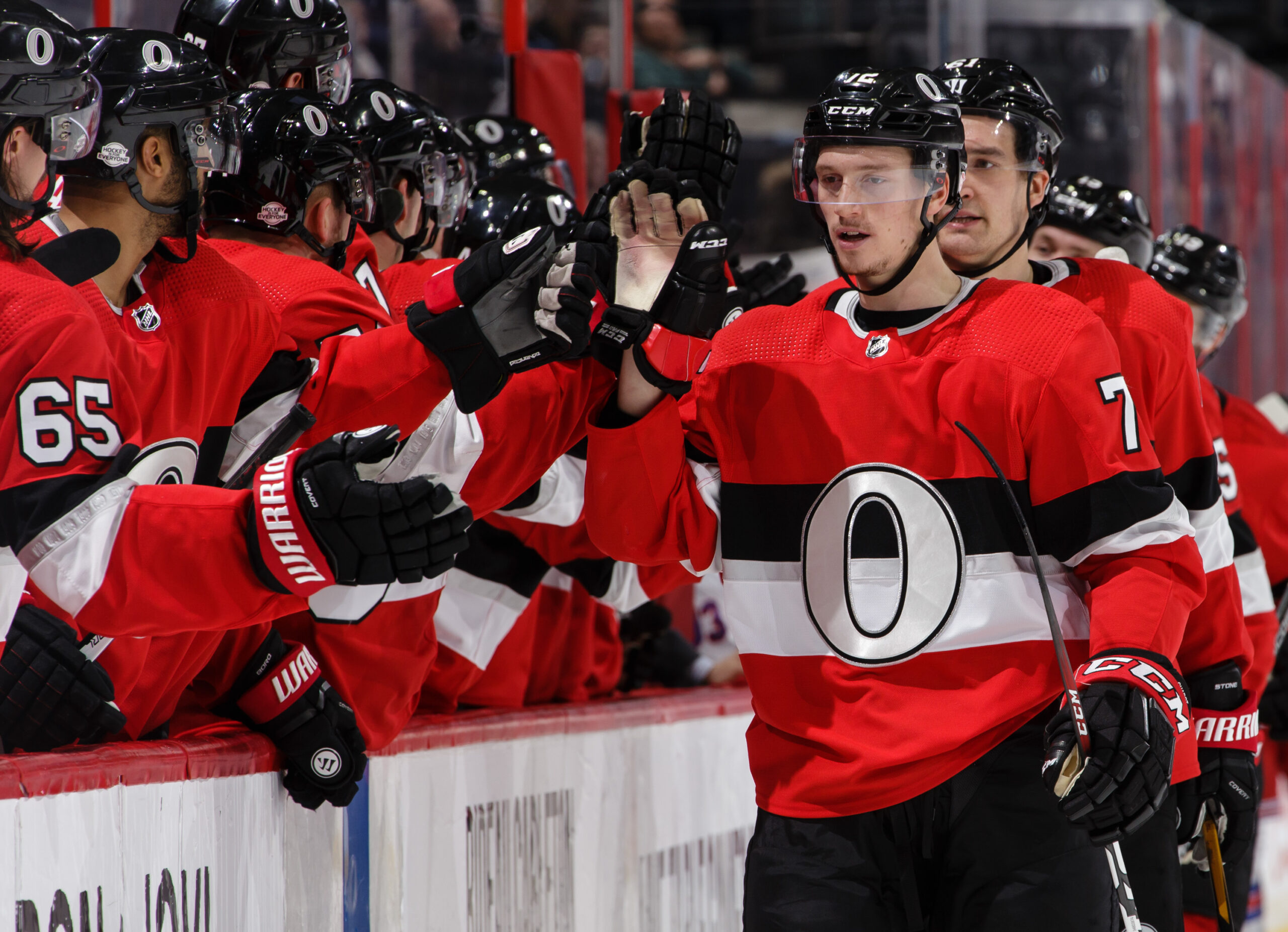 OTTAWA, ON - FEBRUARY 17: Thomas Chabot #72 of the Ottawa Senators celebrates his third period goal against the New York Rangers with team mates at the bench at Canadian Tire Centre on February 17, 2018 in Ottawa, Ontario, Canada. (Photo by Jana Chytilova/Freestyle Photography/Getty Images)

While management may not want to put a label on it, it sure seems like the Ottawa Senators are about to go through a bit of a rebuild. And considering they finished 30th out of 31 teams last season, change isn’t necessarily a bad thing.  The organization has done a decent job of stockpiling prospects over the last few years and now it’s time to see what those kids can do when given the opportunity.

There are as many as five or six guys under the age of 21 that could challenge for full-time spots with the Senators next year.  For most of them, it will come down to training camp in September.  They’ll need to make a strong impression during the preseason and prove that they can bump a veteran guy from the line up on a permanent basis.

But for at least one young player, a spot in the lineup on opening night is considered a slam dunk.  That player is Thomas Chabot.

At just 21 years of age, Chabot is ready to take the next step in his development and become a reliable top four defenceman for the Senators.  We saw flashes of it last year. Now it’s up to Chabot to show he can do it on a nightly basis. Chabot appeared in 63 games with the Sens last year, putting up an impressive 25 points.  That included 9 goals, which ranked 27th among all rookies.  In fact, Ryan Pulock of the New York Islanders was the only rookie defenceman to score more. Not a bad first impression for the 18th overall selection in the 2015 Draft.

Watching Chabot play on a nightly basis, it’s easy to see what the Senators like about him. He’s a smooth-skater with elite offensive instincts. He can lead the attack with his speed or with a pin-point breakout pass.  Today’s NHL is all about offence from the back end… and Chabot brings plenty of that to the table. He’ll be expected to provide that spark on a regular basis next year. Last season, it was clear that the organization wanted to take their time with Chabot.  While there was no doubt he had the skill to play in the NHL, the team sent him down to Belleville of the American Hockey League on a couple of occasions.  Chabot made the best of that experience and when he got the call after just 13 AHL games, he never looked back.

Thanks to his play down the stretch, Chabot even found himself on Team Canada’s radar.  Chabot and teammate Jean-Gabriel Pageau were both selected to represent Canada at the World Championships in Denmark in May. Head Coach Guy Boucher will be looking to Chabot to build on that experience as he takes on an even bigger role with the Senators this season. Top four minutes plus a regular shift on the power play are all but guaranteed for Chabot.

If the Ottawa Senators do indeed decide a full rebuild is necessary, a high-end talent like Thomas Chabot is a great piece to build around.