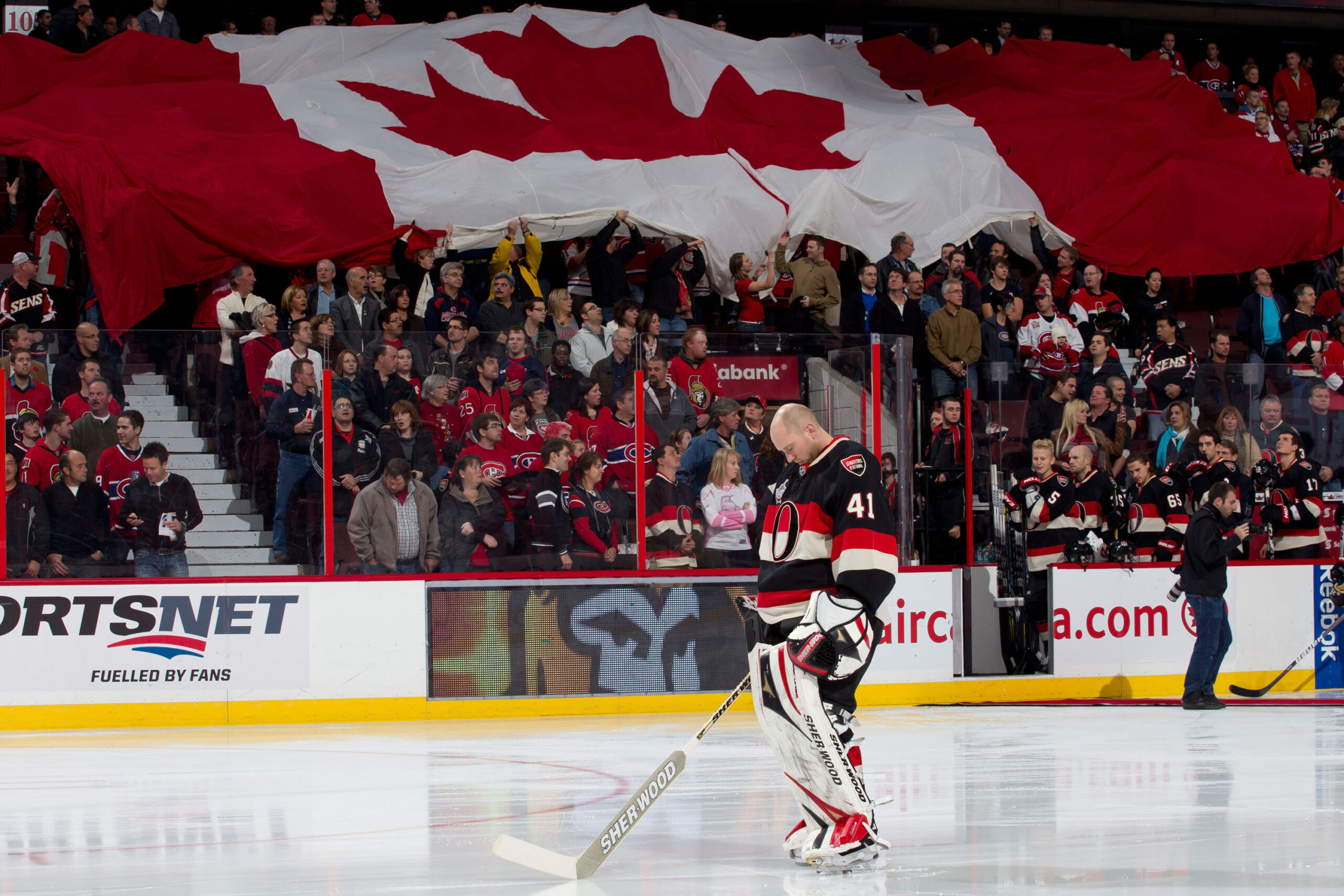 OTTAWA, CANADA - NOVEMBER 4: Craig Anderson #41 of the Ottawa Senators stands on the ice as a large Canadian flag moves though the stands during the singing of the national anthems prior to an NHL game against the Montreal Canadiens at Scotiabank Place on November 4, 2011 in Ottawa, Ontario, Canada. Montreal won 2-1. (Photo by Jana Chytilova/Freestyle Photography/Getty Images)

“We’ve let Craig know that we will not be offering him a contract, said Dorion. “Craig should be given so much credit. It’s one of the best trades (former Senators’ GM) Bryan Murray made. He’s the winningest goalie in this organization, the best goalie we’ve ever had. But it’s now time for us to take another direction and we thank him for everything he did.”

This was the move everyone expected – for a number of reasons. By NHL standards, Anderson is among the game’s elderly, turning 39 in May. The club also has an impressive clump of young talent, itching for an NHL shot or, at least, to move up on the organizational depth chart. Anderson just polished off a two-year deal worth $9.5 million, and his game simply isn’t at that level any longer.

Andy’s heyday came in 2017 when he led Ottawa to an unlikely appearance in the Eastern Conference Final.

“When we made that Conference Final run, everyone knows that Craig was probably our MVP,” said Dorion. “Unfortunately, that Kunitz goal (eliminated the Senators in Game 7). Unfortunately, we were never able to win a Cup with Craig. But Craig did many wonderful things for this organization.”

What made that run even more special is that Anderson was so great while being so mentally weighed down – so worried about the health of his wife, Nicholle, who had been diagnosed with cancer shortly after that season had begun. Anderson took a two-month leave of absence in December and returned in February to help lead the Senators to within one goal of the Stanley Cup Final.

Anderson finished that playoff run with a 2.34 goals-against average and a .922 save percentage in 19 playoff games. A day later, the Andersons announced some amazing news:

Before COVID shut everything down, the Senators final game this season was a 3-2 loss in LA. We had no idea that night back in March that we were watching the greatest goalie in Ottawa Senators’ history play his final game with the club. At some point in the future, if or when fans are allowed to gather again, the Senators will give Anderson the proper send-off he deserves.