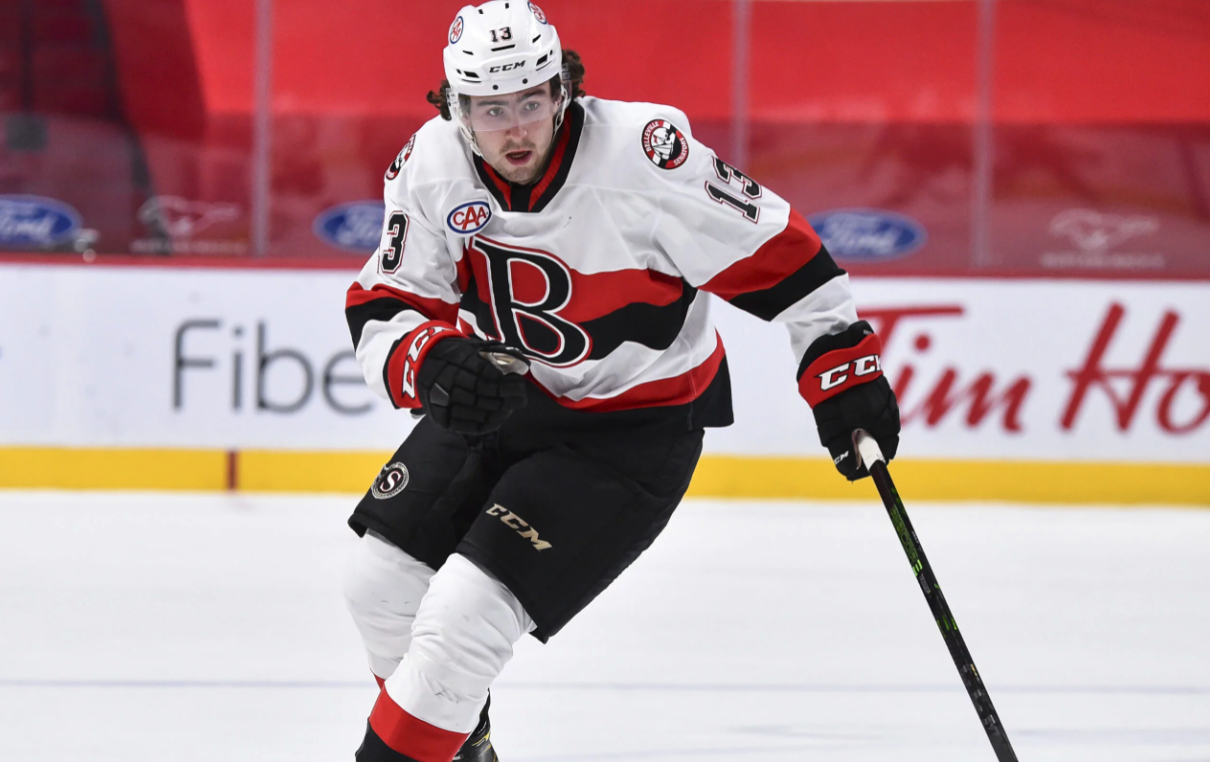 Egor Sokolov’s story of perseverance and determination proves he is an exception to the rule.

The Senators 2nd Round pick was overlooked twice in the NHL Draft. Finally, after exploding in his last season in the QMJHL (where he led the league in goals), the NHL couldn’t help but take notice of the massive 6’4 winger. Suddenly, Sokolov went from being a long-shot to one of the Ottawa Senators most exciting prospects.

In addition to his physical tools and determination, what makes Sokolov a player fans should be excited about is his genuine character and his infectious personality. The young forward made headlines last year when he delivered groceries to those with compromised immune systems at the height of the COVID-19 pandemic.

We caught up with Sokolov to talk about his childhood, his life in Canada, and the upcoming season.

You were born in Yekaterinburg, Russia. Tell us about what life was like for you growing up. What are some of your favourite memories?

Starting my hockey career was the best part of my childhood in Russia. When I was 13 years old, I moved to another city all by myself. My parents were two hours away from me, and I had to travel by train to all of the tournaments that I played. Those are memories I will remember forever.

Did you get to watch a lot of NHL games back home? Or is the KHL the league that gets the most attention on Russian television? Who was your favourite player growing up?

I used to only watch the KHL because of the time difference between Russia and North America. It would be 4:00am when an NHL game would start for me. There’s a KHL team from my hometown, so I used to go to every game. My favourite player would be Jeromir Jagr, hands down. When he came back to the KHL for a couple of years, it was nice to get the chance to
watch him in real life, it was pretty cool. He was always my idol growing up.

Do you remember the first day you played hockey? When did you realize that you had a chance to make a career out of playing the sport?

I started skating at five years old, but I absolutely hated it. My mom literally had to push me on the ice and lock the door and say ‘skate’. I would hold my fingers on the boards, and she would literally take them off. At around 7 or 8 years old, I started skating better and shooting the puck more. I started to have fun. That’s when I decided to make a huge move to another city at thirteen years old. I thought that this is something that I was going to stick to and make a career out of, because it was something I loved.

Your reaction when you were drafted by the Senators was a great moment of celebration and emotion for your family. What role have your parents and family played in your success so far?

I couldn’t go back home due to COVID, so I was in Cape Breton. My billet family set everything up at a restaurant so we could all watch it. It was tough that I couldn’t have my family there as well, but we had them set up on Zoom. That’s just how life is for many people right now.

It was still very special. Obviously, being passed over twice in an NHL draft and then getting picked in the second round was a dream come true. I knew all the hard work I put in, the hours in the gym and on the ice paid off, and I was one step closer to my dream. 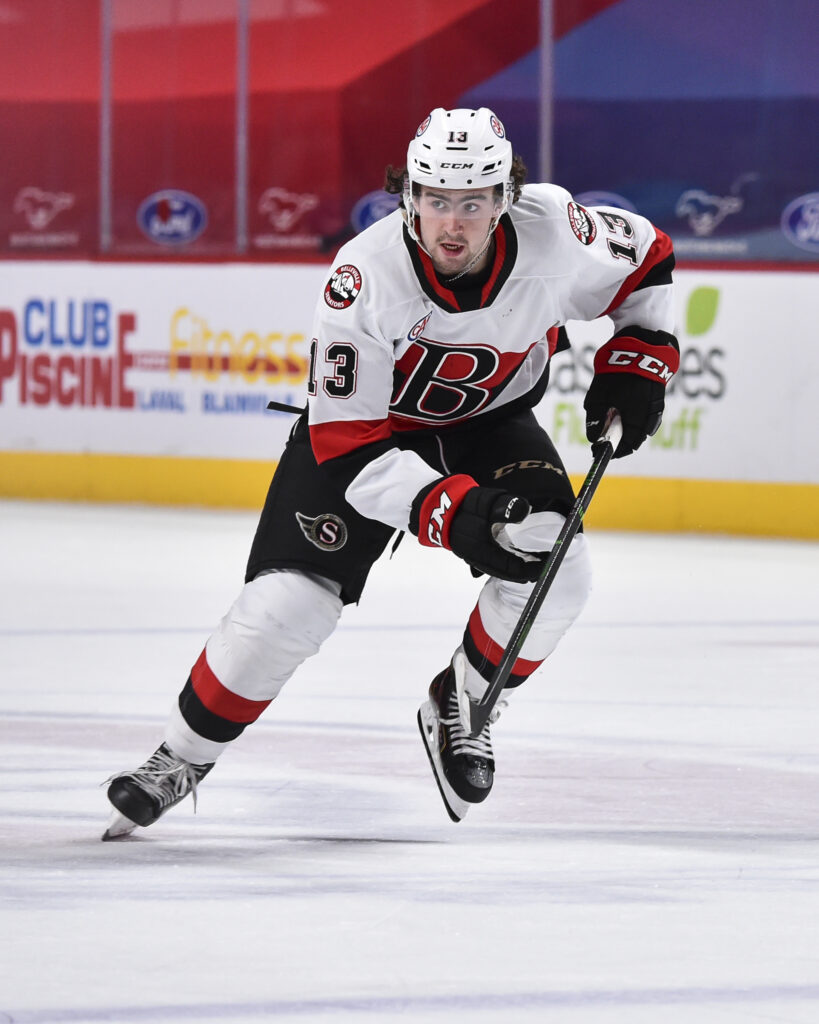 What was your mindset during those times of being undrafted? Did you ever almost give up on your dream? What were some of the things that kept you
motivated?

I was motivated by the people surrounding me and everything they were doing to support me. I wanted to pay them back for their support. I came to North America to chase my dream. I thought I had one more year as a nineteen year old to prove everybody wrong, and prove myself wrong, and turn heads around. I came in with the right mind set at a group summer training where the coaches in Cape Breton were also new. So it was a fresh page in my book, and I took the opportunity to try to prove everybody wrong and give back to everyone who has supported me.

You had a great rookie season in the AHL. How would you describe your first pro season in Belleville? What is the biggest difference between junior and pro so far?

The biggest difference is realizing how much you need to take care of your body. From warming up and cooling down, to everything in between. There are some guys who would warm up for 20-25 minutes before a game. You walk in as a rookie thinking you don’t need that because you are young, but you must realize that the body can crash at any point. So, that was the biggest adjustment for me. I had to learn how to take care of my body more, to make sure I was ready for a game.

You are friends with Senators forward Drake Batherson, who you played with in Cape Breton. What do you like most about Drake? What is something that people might be surprised to learn about him?

How much he cared about me. I don’t think that many people would do what he did for a guy who was new and didn’t speak English. He didn’t give me any option but to go with him everywhere. I think everyone would be surprised to know how much he cares about people, and it was huge for me that he was drafted to the NHL and went to a rookie camp and signed an NHL contract. He took me under his wing and helped me adjust to North America. I’m so happy for him and all his accomplishments, so I’m really looking forward to possibly playing with him again in the future.

What are your goals for the upcoming 2021-2022 season? Do you hope to play with the Senators this year, or do you think this will be another year to develop your game further in the AHL?

It’s going to be up to the coaches and management. I’m going to come to the main camp with the right mindset and try to show them what I’ve got and how much I’ve improved over the summer, and try to be myself. They will decide whether I’m ready or not. About 82-93% of the guys from Tampa Bay played in the AHL. I would have no problem with that, to improve my confidence and get better as a player and a person.

What is your favourite thing to do when you’re not playing hockey?

What is your favourite movie or TV Show?

Money Heist on Netflix, I love it. I can’t wait for the new season to come out in September. That and Sons of Anarchy.

What is your favourite type of music?

I honestly don’t have any. I listen to whatever my ears like (laughs). There are so many good artists with good music.

What is your favourite meal?

Steak with sweet potatoes is my go-to.

Who would you say are the people that you would thank the most for your success in life so far, and why?

All my coaches I’ve had growing up. Cape Breton in particular. I grew so much there as a person and a player. My strength coach, my family, my billet family, my agent, all the people who have been around me to help me succeed. I’m so thankful to have so many good people around me. I’m looking forward to growing and getting better and continuing to chase my dream. One day I will get there and be able to thank everybody.

What is a piece of advice you would give to someone who wants to follow in your footsteps?

Never give up on your dreams. I was passed over twice in the draft, but I didn’t quit on it. I spent 10-11 years training, skating, and sacrificing. My parents did as well. If you work hard for something, at some point it will pay off. Never give up, work hard, be surrounded by good people, and be a good person.