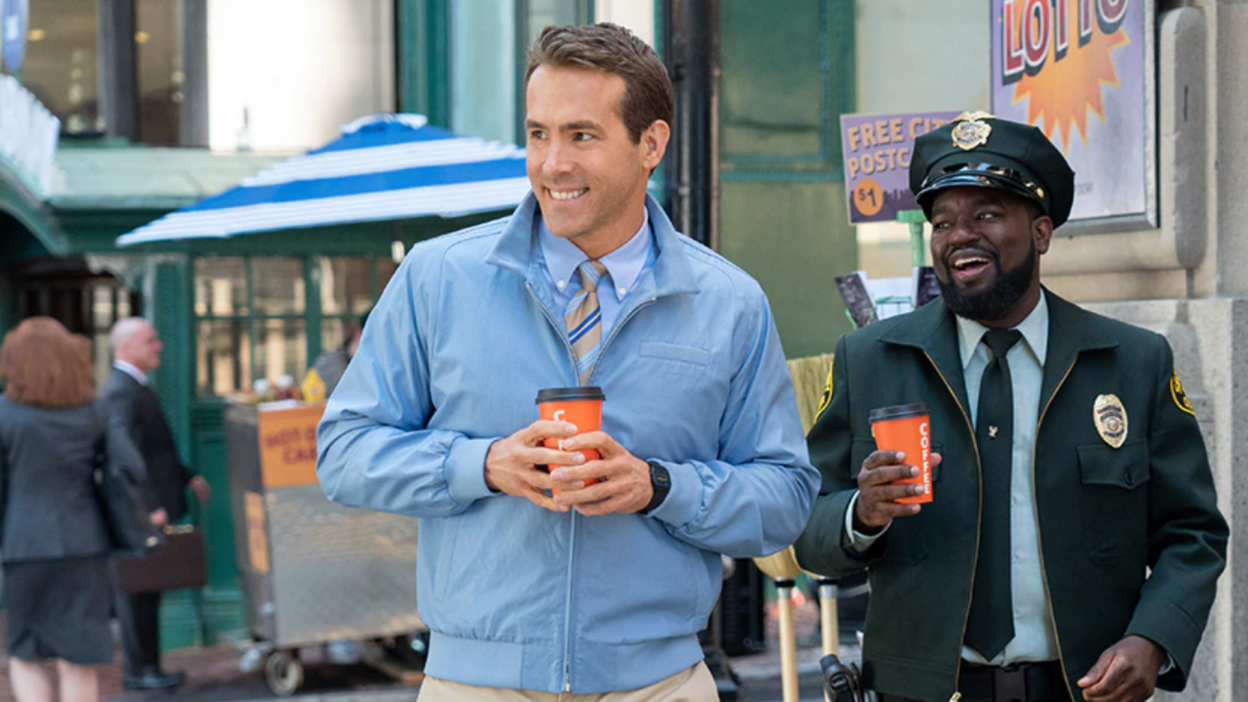 Started at the bottom with 2011’s Green Lantern, and now both Ryan Reynolds and Taika Waititi are here… making a perfectly serviceable summer blockbuster.

Movies based on video games, for the longest time, were always a losing gamble for film studios. Worst case scenario, none of the actors would put the film on their resume and best case scenario, audiences would say, “I… didn’t hate it.” But that has changed a bit in recent years.

While they have yet to be perfected, but their quality is undoubtedly improving. Detective Pikachu exceeded expectations as both a video game adaptation and the first live-action adaptation of the popular manga, while Sonic the Hedgehog was a hit with younger audiences. Even Wreck-it Ralph and Ready Player One proved that a video game film can work with original characters and stories.

And now, we have Free Guy, starring Ryan Reynolds as the titular Guy (or Blue Shirt Guy), who realizes that he wants more than his ordinary, mundane job at the bank. He wakes up to the same apartment, the same goldfish, the same job where he’s at the mercy of bank robbers controlled by gamers. Oh right, I forgot to mention, Guy is an NPC (Non-Player Character) in a massively popular online multiplayer game called Free City.

One day, Guy decides he wants to break free from the shackles of his regular day-to-day and do something different. So, he manages to thwart a bank robbery on his own and get his hands on one of the players’ glasses that open his eyes to an entirely new world. However, quite sporadically, Guy loses interest in this development after crossing paths with Millie, a.k.a Molotov Girl (Jodie Cromer), who’s on her own mission against the greedy CEO of Soonami Games, Antwan (Taika Waititi).

Despite being a talented leading man within the genres of drama, action and comedy, Ryan Reynolds has had quite a few blunders in his career. For every Buried and The Proposal, there’s RIPD, The Change-Up, and X-Men Origins: Wolverine. Thankfully he was able to catch a second wind in his career in 2016 with the smash hit Deadpool, which started him on his funny man career.

Now, he’s seemed to find the right groove in his career, which has led him to Free Guy. Here, he’s perfectly cast as a ridiculously optimistic patsy who finds endless joy in the game that he’s part of. Unfortunately, his motive is probably the weakest link of the film.

In the real world, Millie is one of two brilliant developers who created a new revolutionary game that didn’t take off. As a result, the original code, including the AI technology, was snatched up by Antwan, who illegally used their work as the foundation for Free City. She and her partner Keys (Joe Keery), who’s currently employed at Soonami Games, team up to prove Antwan’s deception and get the credit they deserve.

While that all sounds really interesting and engaging, it’s difficult to look past that; despite Cromer adding layers of charm to her character, Millie is mostly portrayed as the eye of affection. Guy’s whole motive to improve his life, his way of living and his overall mood all stems from the fact that he’ll do anything for her. No seriously, he literally verbally states that when he declares his love for her.

But that’s not to say that both Reynolds and Cromer don’t create an offbeat yet likeable romance; it’s just a shame that the whole plot revolves around how attractive Millie is. Also, the main villain in Antwan is pretty dull.

While Waititi is putting his all in the performance, making him as goofy and despicable as possible, his whole motive just boils down to money, and that’s it. He even verbally admits that “numbers” are the only important thing to him.

Sure, he can get a couple laughs here and there, but his character does sort of add to how “juvenile” the script can be. But, thankfully, it really is the performances that save this movie. All the actors give it their all, and it’s both hilarious and engaging.

All these ingredients together create a cinematic experience that will satisfy both general audiences and gamers alike.