In Ottawa, the spring of 2015 will always be remembered for the Cinderella story of Andrew Hammond, who came out of nowhere to lead the team on a historic run to the playoffs.

Coincidentally, the rise of the Hamburglar is also the reason that Colin White is in the Senators system today. Management’s faith in Andrew Hammond led to the team trading incumbent backup Robin Lehner to the Sabres in a deal that sent Buffalo’s 1st round pick to Ottawa. It was this pick, the 21st in the draft, that the Senators used to select White.

Colin White, along with the fellow 2015 Senators 1st Round Pick Thomas Chabot, have quickly established themselves as the Senators top prospects heading into 2018. While Chabot has seemingly entrenched himself on the Sens blueline- White awaits his call to the NHL while gaining valuable playing time with the Ottawa’s AHL affiliate in Belleville.

We had a chance to catch up with White recently to talk about his world junior success, life on the road and his journey towards the National Hockey League.

Faces Magazine: For those of us who haven’t been to Boston before, tell us a little bit about the city and what are some of your favourite memories from growing up there?
Colin White: Boston is definitely home to me, even when I go to other great cities like New York, Boston always comes first. It’s not too big so you can really get to know people, it’s a very welcoming City. I grew up by the water so it was wonderful to go to the beach everyday in the summer. Boston also has a great sports community which was helped growing up since I played a lot of sports.

When did you first develop a passion for hockey and how did it come into your life? Were there any other sports that you were involved with?
My passion came when I was 10 or 11 on a hockey team in Boston, and my love of the game just grew from there. I did other sports on the side as well like football and baseball all the way through high school but hockey was always the focus.

As a kid, who were some of your favourite hockey players to watch and what about nowadays?

My parents are both from Pittsburgh so I grew up watching the Penguins and when Crosby came along and I enjoy watching him. Now it’s just fun to watch all of my friends develop, Matthews, Tkachuk and Keller, it’s great to watch those guys come into success.

One of the first major leagues you participated in was the 2013-2014 U.S. National U-17 Team, where you put up 25 points in 27 games. What was this first experience like for you and how did you make sure to be well prepared for it?

That was an awesome experience for me. It was hard knowing I was going to be away from family and friends but my mom came with me the first year and we rented a house which was really helpful. There were also a few people out there who I had played with before so that kept me feeling comfortable

You played hockey at Boston College for 2 seasons and put up some amazing numbers, including 43 points in 37 games during 2015-2016 and then 33 points in 35 games during 2016-2017. What are some of your favourite memories from your time spent playing there and what’s one of the most valuable things you learned during those two seasons?
That was a great first year there, we made it all the way to the frozen four, it was a really fun team and we were close off the ice. For me I think the schooling part was big, I know hockey doesn’t last forever and the schooling is a must. I’m actually thinking about following up on some more schooling. 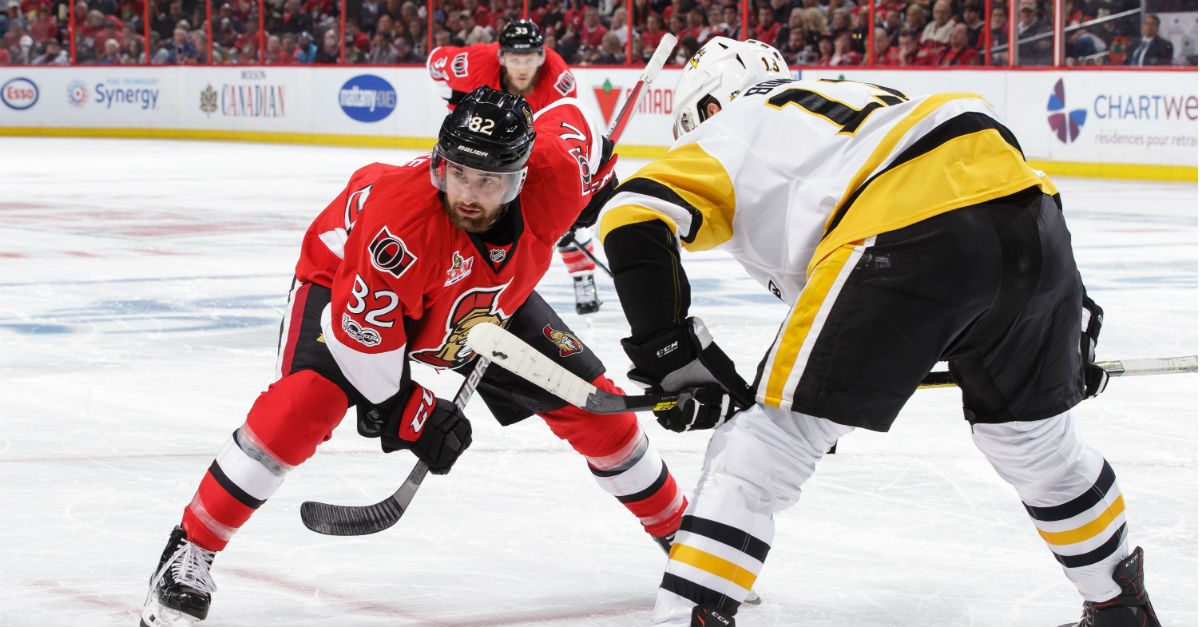 What was the transition period like for you, going from playing at the NCAA level to the AHL level? What were some of the biggest changes you noticed and had to adapt to?

A different pace was a big one, the game moved a lot faster, there were older guys, more intense positioning, and more talking. This was a move into a man’s league it wasn’t just a bunch of kids anymore.

Some of the biggest changes I had to adapt to would be strength and learning to create a different lifestyle for myself. Maintaining health through sleep, nutrition and recovery all became more important. Learning how to manage those things on my own was a big adjustment.
For those who don’t know much about your life off-ice, what are some of your favourite things to do with your spare time? Do you have any go-to restaurants here in Ottawa that you enjoy visiting when in town and are there other sports you enjoy playing?

Napping is a big hobby of mine (laughs) and when it’s warm out I like to golf. My go to restaurant in Ottawa would have to be the Keg I’m a big steak fan.

Walk us through draft day. What was it like for you having been selected by the Ottawa Senators 21st overall in the first round of the 2015 NHL Entry Draft and who was the first person you spoke to after hearing the good news?

That was an awesome day, one of the best days of my life. It’s great to be apart of the Canadian market where a lot of people avidly follow the team. It was a really fun day and I think almost my whole family was there to support me.

Do you remember much about your first hockey game with the Ottawa Senators? What was one of your favourite memories from that game and can you tell us what the experience was like for you?

It was definitely a once in a lifetime experience. It was at the Joe and it was one of the final two game there so that was pretty cool to play in the arena before it closed. A bad memory would be missing the shoot out but a good one was just being out there with the guys and getting a chance to play with some of the best players in the world.

Who’s one teammate on the Ottawa Senators who was really helpful with your transition to the team and how did they help welcome you and help you adapt to things here in Ottawa?

One guy that really stuck with me was Chris Neil, I’ve spend a good amount of time with him off the ice. He’s helped me learn how to respond to the game and be professional. He’s a great guy.

Last year with the Senators, you were unexpectedly put in during a shootout for the Ottawa Senators. What was that experience like for you and what emotions ran through your head during your first NHL shootout experience?

I hadn’t played in a bit so I was pretty cold and I was nervous, but I tried to stay positive. I think I fumbled with the puck a bit, but these things happen. I wish I could get the chance to go back. Luckily we got the point and went on a playoff run! 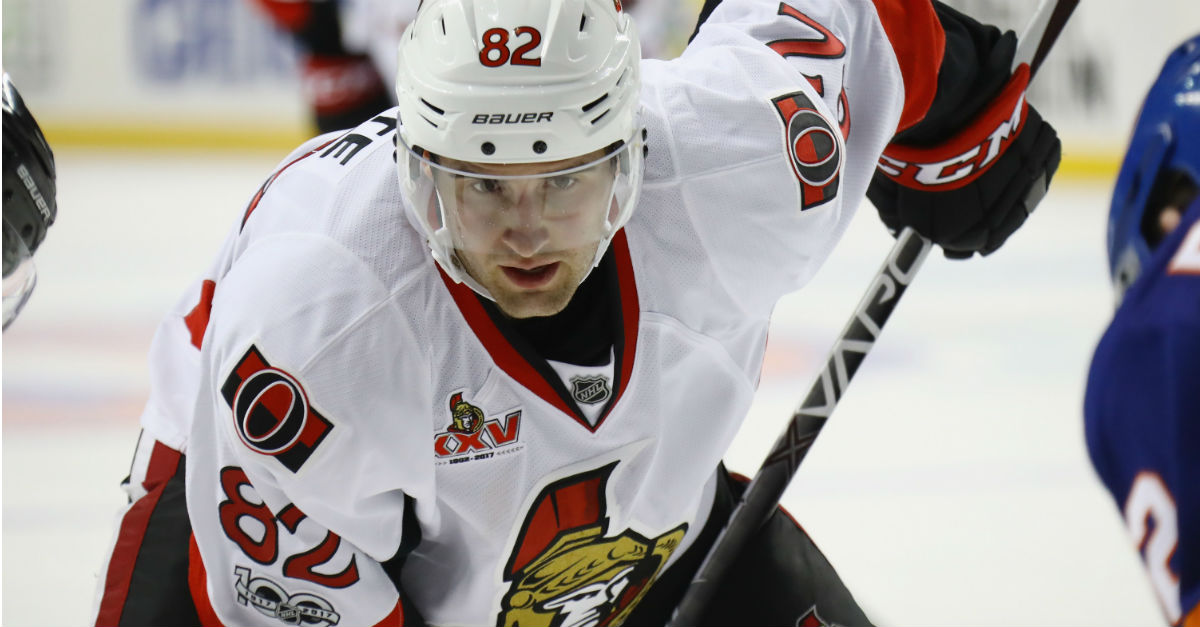 How do you feel that your skills and abilities fit with the Ottawa Senators and how will these skills be a continuous asset for the team?

I think speed is an important one and just getting into the gritty areas would be huge for me. Ottawa plays a different system compared to most other teams and speed will help me be compatible with their system.

What’s one part of your game that you’ve been working on to improve and how is it progressing in your opinion?

Puck protection in the corner and gaining strength around the pucks. I need to continue working on this but I think I’m going in the right direction

Out of the games you’ve played so far with the Ottawa Senators, do you have a specific memory that stands out over the rest?

That first playoff round for sure. It was crazy to just be on the ice and be in a must win situation. It was tense but fun.

Based on your Twitter, it seems like you’re a big Tom Brady fan. Are you an avid Patriots fan and have you ever seen them play at home?

Yes to all! I’m a die hard Pats fan, I love following and watching the team. I’m also a big fan of Tom Brady, he does a lot for the City. I’ve also been to a bunch of games, my best friend has season tickets and it’s an amazing experience.

What’s one thing about yourself that would surprise most people, even your close friends?

Nothing (laughs) I’m a pretty open book. You see what you get.