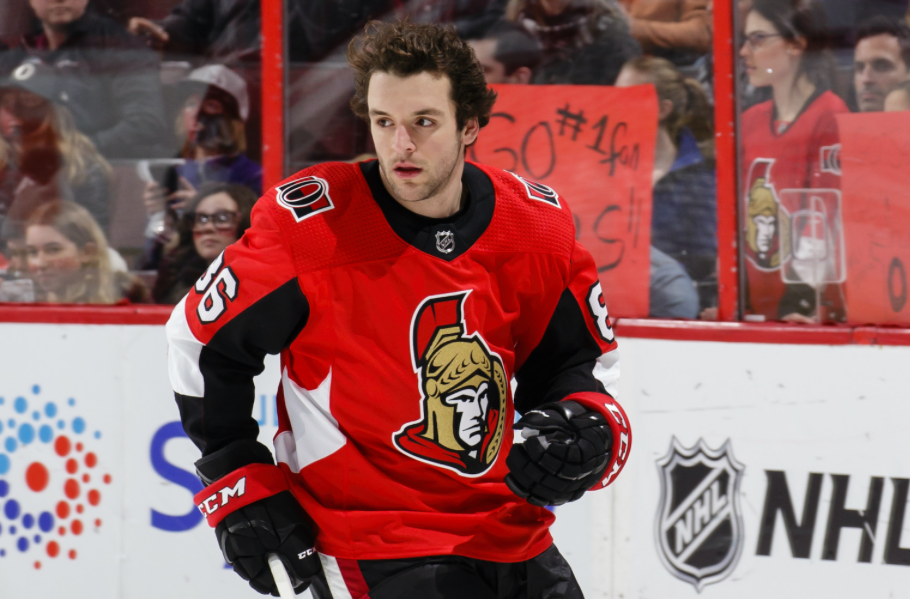 It feels like only a moment ago that Christian Wolanin was regarded as an important piece in the Ottawa Senators’ rebuild puzzle. But things can change quickly in the NHL. The 26-year-old defenceman cleared waivers Friday and, for now, has been assigned to the club’s taxi squad.

Wolanin wouldn’t have been exposed on the waiver wire if the Sens were at all worried about losing him. They certainly had better options to waive, particularly on defence, that would have cleared easily. But the team seems ready to move on from Wolanin and, at least on the surface, it doesn’t make a lot of sense.

Like most Senator players, Wolanin has had some really shaky outings in this weird campaign. But, unlike most, he’s had a very short leash with head coach D.J. Smith, playing in just 15 of the 33 games so far (a few games were lost due to injury).

The lack of patience is a bit of a mystery. After all, he’s barely played the equivalent of one pro season (109 career games combined between Ottawa and Belleville).

In 2018-19, his rookie year, he split his season between Belleville and Ottawa. In early March of that same season, head coach Guy Boucher was fired and replaced on an interim basis by Marc Crawford.

Crawford was clearly a Wolanin fan, playing him regularly for the rest of the season, giving him 18-24 minutes a night. If you look at the player’s game log, you can literally see the spike in Wolanin’s ice time the night Crawford took over.

At that stage, the future looked bright for the kid. So, what happened?

In the fall of 2019, just before training camp, Wolanin suffered a major shoulder injury that cost him most of his season. It was a big story at the time: “Top Prospect Out For At Least Four Months.” He played only 3 games that season, right at the end of the year, and his return was certainly well celebrated by the club.

10 months after his return, when the new NHL campaign finally arrived this year, a healthy Wolanin seemed to be ready for his breakout year, armed with a one-way contract for the first time (paid NHL money no matter where he plays).

But, by then, things had changed.

Wolanin now had a new coaching staff to try and win over and many layers of rust to knock off. On opening night this year, January 15th, 2021, it was only Wolanin’s fourth NHL game since April 2019.

After the win that night, Smith scratched Wolanin and continued sitting him out for the next three games after that. Smith was more impressed (and still is) with journeyman Mike Reilly and 35-year-old Braydon Coburn. There seemed to be no regard for Wolanin’s long road back, the rust, or the kind of player Wolanin showed he could be before his injury.

If there were ever a season where a prospect should be allowed patience and time to work out the kinks, it’s this one. But there’s been very little rope given to Wolanin, who now looks fully drained of confidence and that 2019 rookie swagger.

Meanwhile, the Sens know they’re close to a world where the position of left defence will probably be stacked, composed of Thomas Chabot, Jake Sanderson and Erik Brannstrom, all with first round pedigree. Perhaps part of thinking is, ‘well, there’s probably no room for Wolanin down the line anyway.’ But that’s “perfect world” thinking and sometimes things take a surprising turn. Players get hurt; take a long time to develop; or they just disappoint you. Maybe they end up needing Wolanin. Maybe he finds his way or at least becomes tradable for future assets.

In fairness, as outsiders, we only get a part of the story. Maybe something has happened off the ice that changes this tune completely. Maybe Wolanin has formally asked for a chance to go to a new organization. Either way, in the lead up to all of this, it feels like his situation wasn’t handled very well.

So Wolanin goes on the taxi squad for now and perhaps down to Belleville at some point. With only a month and a half left in the season, he probably doesn’t have enough time to impress or change Ottawa’s mind before his contract expires this summer.

But, just two years ago, Wolanin showed he can be an NHL-level defenceman and another team would be smart to give him a good long look this fall. A new contract, a fresh start and a little injection of confidence are probably all he needs.