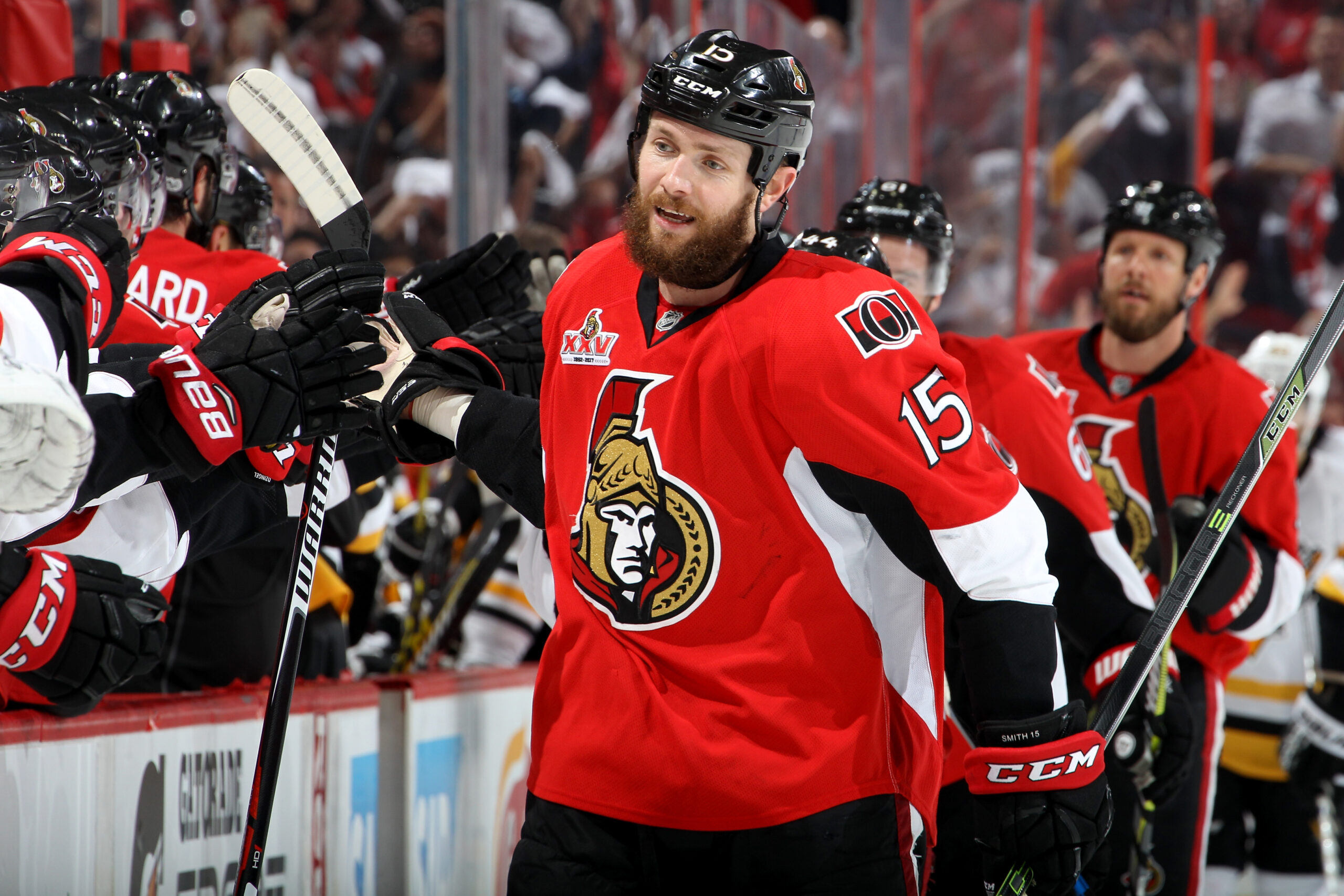 OTTAWA, ON - MAY 17: Zack Smith #15 of the Ottawa Senators celebrates with his teammates after scoring a goal against Marc-Andre Fleury #29 of the Pittsburgh Penguins during the first period in Game Three of the Eastern Conference Final during the 2017 NHL Stanley Cup Playoffs at Canadian Tire Centre on May 17, 2017 in Ottawa, Canada. (Photo by Jana Chytilova/Freestyle Photo/Getty Images)

It was said that hockey is a business and that was the rationale for Zack Smith being put on waivers.

It is our opinion that because hockey is a business, Smith should never have had to go through that experience.

Let’s take a look at Zack Smith the player from strictly a point production versus contract viewpoint.

It goes without saying that Smith had an off-year last year. Nobody would argue that 5 goals and 19 points should be the production of a player making $3.2 million a season. However, Smith missed 14 games in 2017-2018 and it is widely speculated that Smith was playing through multiple injuries for the majority of the season.
To properly assess Smith’s contract compared to his performance, you must take a larger sample size than just his injury plagued 2017-2018 season.

On sheer point totals alone, let us compare Smith’s production to a few other players around the league who are at or around the same age.

The most obvious example is that of Leo Komarov.

Komarov is 31-years-old and has played in exactly the same number of games (223) as Smith over the past 3 NHL seasons.

Leo Komarov and Zack Smith also have the same amount of points (87) over the last 3 seasons.
Zack Smith’s salary this year is $3.25 Million. Komarov will make a total of $4 million this season ($3 Million base + $1 Million bonus).

Another comparable is Nick Bonino. Bonino is the same age as Smith (30) and has scored just 4 more points (albeit in 9 fewer games) than Smith over the past 3 seasons. Nick Bonino will be paid $4.1 Million this season with the Nashville Predators.

One final comparable is Carl Hagelin. Hagelin is also 30-years-old. Over the last 3 years, he has 4 more points (in 1 less game) than Smith. Hagelin will be paid $3.67 million this season by the Pittsburgh Penguins.

Our point here is this: even though Smith was injured last year and had an off-year, he is simply not being overpaid by today’s NHL standards. In fact, Zack Smith is being paid less than some who have produced the same as him over the past three seasons.

Now, let us have a look at what the statistics do not measure. Namely, his impact on his teammates on and off the ice.

When Zack Smith was put on waivers, you saw anger and raw emotion from Senators players. Yesterday, it became clear how important a player and person Smith is to his teammates. On the ice, Smith is what is often called a ‘throwback hockey player’. He’s physical, he protects his teammates and is not afraid to stand up to guys much larger than him to do so. However, there is so much more that makes him so universally liked and respected.

Off the ice, Mark Stone spoke yesterday of how Smith made him feel comfortable his first season and is always the first guy to invite him and other guys over for dinner. Smith takes pride in making his teammates feel part of the team and welcome. Smith also is known as one of the funniest guys on the team, never afraid to make a fool of himself to make his teammates laugh and feel relaxed during stressful situations that arise over the course of a season together.

Yes, the saying “he’s good in the room” is often overused at times in pro sports. But Smith is much more than a cliché ‘glue guy’ to his teammates. He always makes his teammates feel like family and, for new players especially, having a guy like Smiths makes them feel comfortable, part of the team and welcome in a new city is worth much more than perhaps the Senators realized yesterday.

Finally, let us have a look at Zack Smith and his impact on the Ottawa community.

To me, what makes Zack Smith invaluable to (and under appreciated by) the Ottawa Senators franchise – especially with the climate around the team today – is just how much he does for our community and what kind of person he truly is.

On a personal note, Zack has always been the first person to offer his time, to donate money or attend every single fundraising event I’ve ever done since I met him in 2014. In 2016, he showed up after a game, white as a ghost and sick as a dog. I couldn’t believe he came. But he did just to say hi to fans and drop off some signed items we used in the auction.

Smith has also agreed every single time to meet children after the games and to tour them around the building or show them the dressing room. When he was injured last season, Smith came down to a suite to surprise some kids who were having a tough time with their parents’ divorce. He brought them some gifts and a signed jersey. To this day, I’ve been told that it was the happiest night of those kids lives.

Smith also happily donates his woodworking for charity fundraisers and has been a big part of raising a lot of money for numerous charities around the city.

All these things do not add up in the score sheet or will not win a hockey game this year. But for the Ottawa Senators franchise in 2018 – who are currently facing an unprecedented wrath from their passionate fan base – the value of having a person like Zack Smith representing your franchise can no longer be underestimated by ownership/management.

Smith’s wife Brittany is also someone that shouldn’t be overlooked. She is as sweet and sincere a person as I’ve met over the last 5 years. She donates her time to numerous charitable causes and plays a key role in the organization of Maddy’s Gala – an extremely popular charity gala each year. Brittany recently gave birth to their beautiful daughter Rae a few months ago.

Smith will be the first person to tell you he knows he’s not the most talented player to suit up for the Ottawa Senators. He knows that. However, the Ottawa Senators franchise dodged a huge bullet today when Zack Smith cleared waivers. Here is hoping that they appreciate him a little more moving ahead.