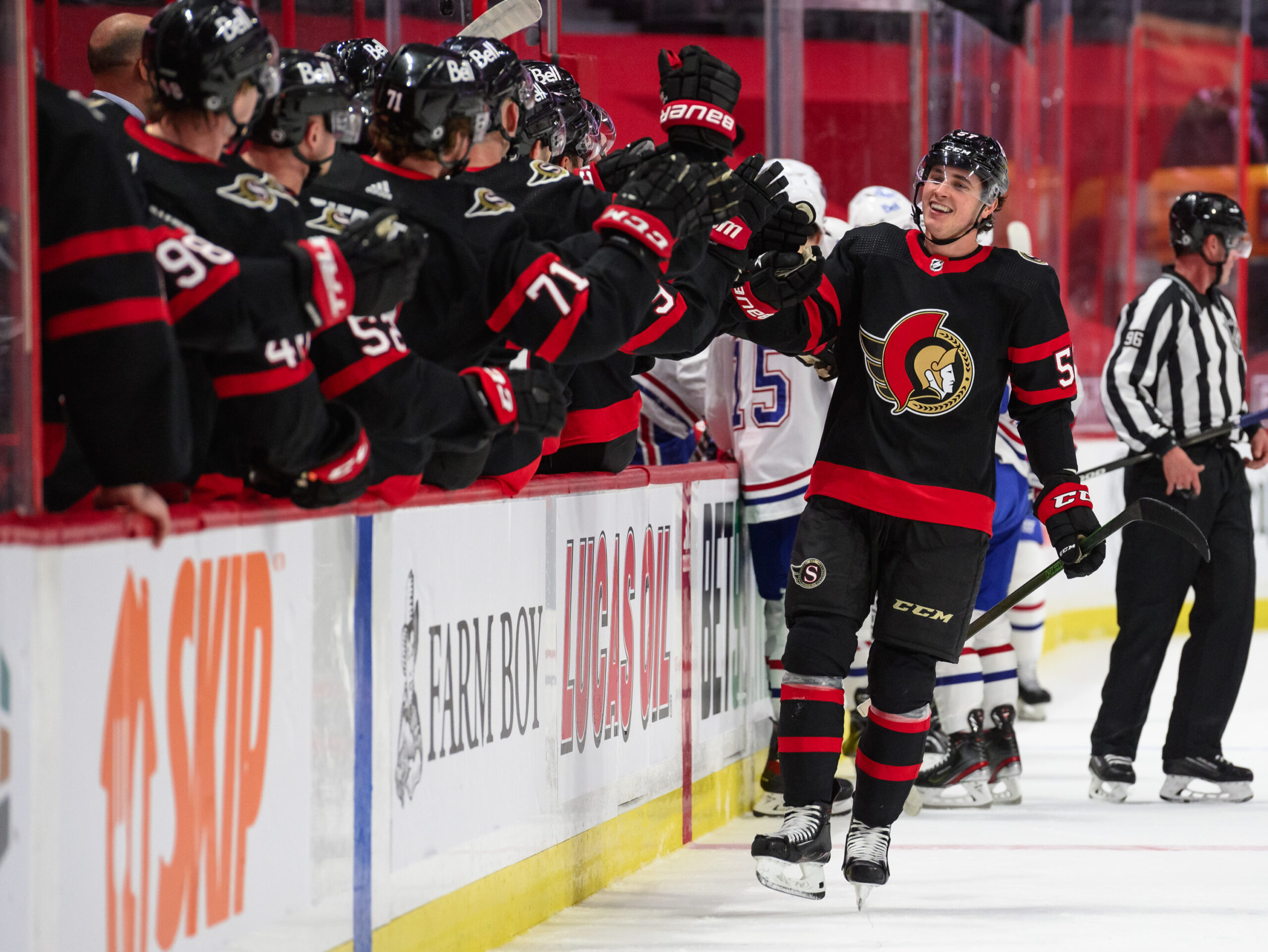 The Montreal Canadiens were in town tonight. It was the last meeting between the Senators and the Canadiens for the 2020-21 regular season. Montreal had won three straight and were looking to extend their streak in Ottawa tonight. The Senators were also looking good going into tonight’s game as they’ve won three out of their previous four contests. Both teams are battling injuries with their starting goalies as Matt Murray remains out with a lower body injury and Carey Price deals with a concussion. As a result, Ottawa turned to Anton Forsberg once again and Montreal had Jake Allen between the pipes.

It was an even score until halfway through the first. With under 9 minutes left, Shane Pinto put the Senators on the board when he snagged a quick rebound off of Allen and tucked it in the net. It was Pinto’s first goal at the NHL level with assists coming from Artyom Zub and Erik Brännström. Ottawa nearly went up 2-0 shortly after the opening goal. Following a Montreal turnover, Ryan Dzingel skated up the ice on a breakaway effort. Allen came out to stop the chance but failed to freeze the puck leaving Chris Tierney with a wide open net. Jake Allen was able to sprawl in front of the puck to save the goal and keep the Canadiens within one. It looked like Ottawa was going to finish the opening period with the lead but with less than a minute left, Montreal found the equalizer. After the Habs won a face off in Ottawa’s zone, defenceman Joel Edmundson found the puck on his tape and was able to sneak one past Forsberg to close the period at 1-1.

During the second period, this one was all about the Sens. After failing to go up on the power play, they made up for it shortly after when Brady Tkachuk was able to crash the net and bury a quick feed from his line mate, Josh Norris. Brännström also assisted on the play for his second point of the night. After more back and forth, it seemed like we were going to have to wait for the third to see more scoring. However, this game had another last minute goal in store as we’d see Nick Paul redirect a shot from none other than Erik Brännström. After an opportunistic second period, the Senators headed back to the locker room leading this game 3-1.

If you thought the third period was going to be a close fought grind, guess again. The chances kept coming for the pesky Sens and they didn’t hold back one bit. At the 4:40 mark in the final period, Connor Brown scored his nineteenth of the year when Zub set him up with a wide open net. After going up 4-1, it was less than 6 minutes later when Ottawa managed to score yet again. Following a couple of roughing penalties, Alex Formenton found himself bringing the puck into Montreal’s zone and taking it right to the net. He was able to beat Allen for his fourth of the year putting Ottawa up 5-1. That would be the final score for this one with the final shot totals being 34-31 in favour of the Sens.

The vision from Zub! 👀#GoSensGo pic.twitter.com/r6IjUhejnc

Despite the standings, the Senators continue to look great, as they have been looking to close out the season strongly. They’ve now won four out of their last five and we saw multi-point efforts from several players including a 3 point night from Brännström. Paul and Zub also collected two points in tonight’s match. Look for another strong effort from the Sens when they take on the Jets in Winnipeg on Saturday at 7:00 P.M. E.S.T.