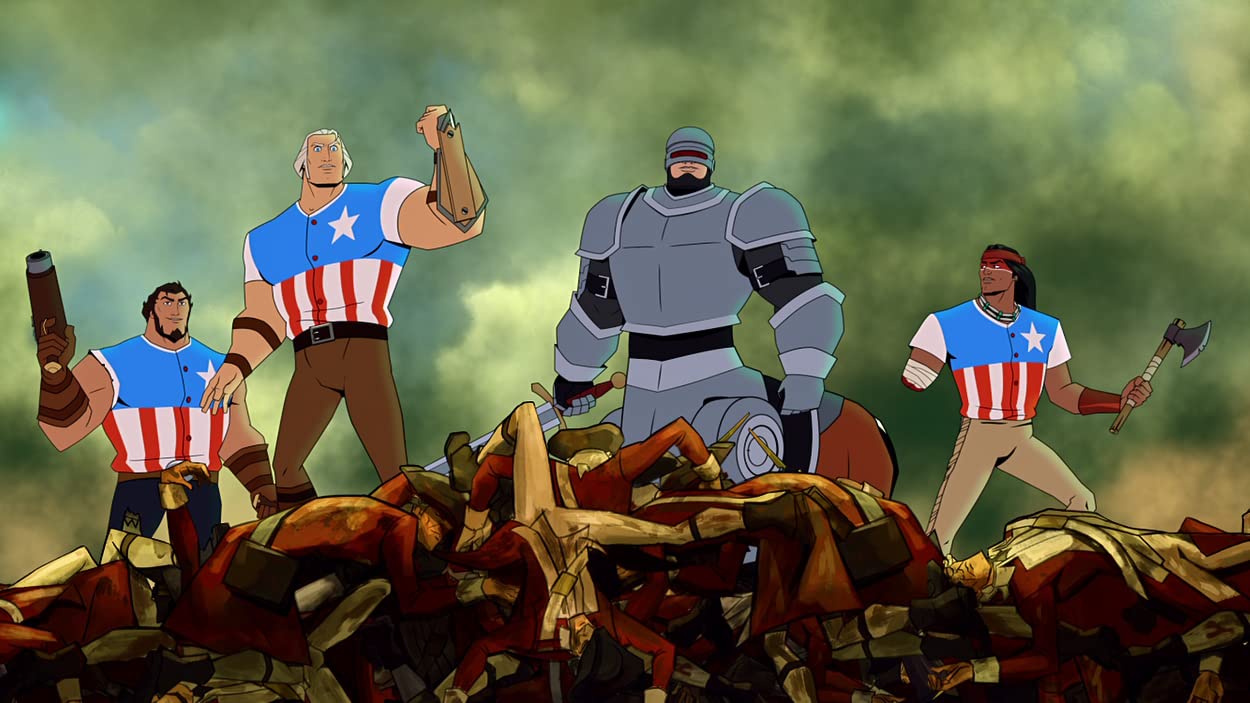 Do you think history class would have been more exciting if it told the story of dual chainsaw-wielding George Washington joined forces with Samuel Adams, Paul Revere, Thomas Edison, and Geronimo to avenge the death of Abraham Lincoln at the hands of Benedict Arnold?

Oh, and George Washington is a beefy all-American hero. Thomas Edison is an Iron Man-style Chinese woman. Paul Revere has a “special” relationship with his horse, and Benedict Arnold is a werewolf. I’d really like to think so.

Just when you thought F9 was going to be the dumbest film released this week, producers Phil Lord and Christopher Miller (Jump Street films) along with Matt Thompson (Archer), give us their own rendition of America’s “history.” But trust me, don’t just dismiss it as just dumb.

I mean, don’t get me wrong… America: The Motion Picture is a dumb movie, but it’s a self-aware kind of dumb. Watching this, you know these guys just wanted an excuse to tell jokes while mocking America’s ever-growing labyrinth of disturbing history.

From the very beginning, the film starts throwing joke after joke at you nonstop, and you begin to see a bit of the problem right there. If you’ve ever seen these Lord and Miller or Thompson’s previous work, then you’ll be familiar with their particular brand of comedy.

While both are known for their wacky characters and R-rated content, they have very different strategies for their comedy. For one, Archer is very dialogue-heavy; the comedy centers on how characters discuss their situation, elevating the action. On the other hand, the Jump Street movies lean more into action-comedy, forcing their characters into over-the-top scenarios that lead to funny dialogue.

Not to say that Archer doesn’t have funny scenarios, or the Jump Street movies don’t have witty dialogue, but one is clearly more quotable than the other. So, what happens when you combine these comedic rhythms?

Well, a bit of a comedic mess, to be honest. See, in Archer, the action can give the audience a breather from the continuous dialogue. At the same time, Jump Street uses dialogue to slow down the over-the-top action.

Here, we get both; a whole lot of action with a whole lot more talking. This barely gives the audience enough time to really take in a funny line or humorous action sequence when the writers immediately shove another joke down your throat.

With that said, though, a good chunk of this movie is still very funny. Many people who worked on this film have decades of combined talent in comedy, from the recent Lego Movie and Spider-Man: Into the Spider-Verse to the more obscure Frisky Dingo and Clone High.

Not to mention a lot of the voice actors are really giving their all. Andy Samberg sounds like he’s having the time of his life voicing Benedict Arnold with that deliciously evil British accent. Simon Pegg is practically unrecognizable as the overtly sinister King James. Even Killer Mike in a cameo as a blacksmith hits that perfect comedic note.

This may not gain a cult following like this team’s other work over the years, but it’s certainly not a bad way to bang out an afternoon or movie night with friends.