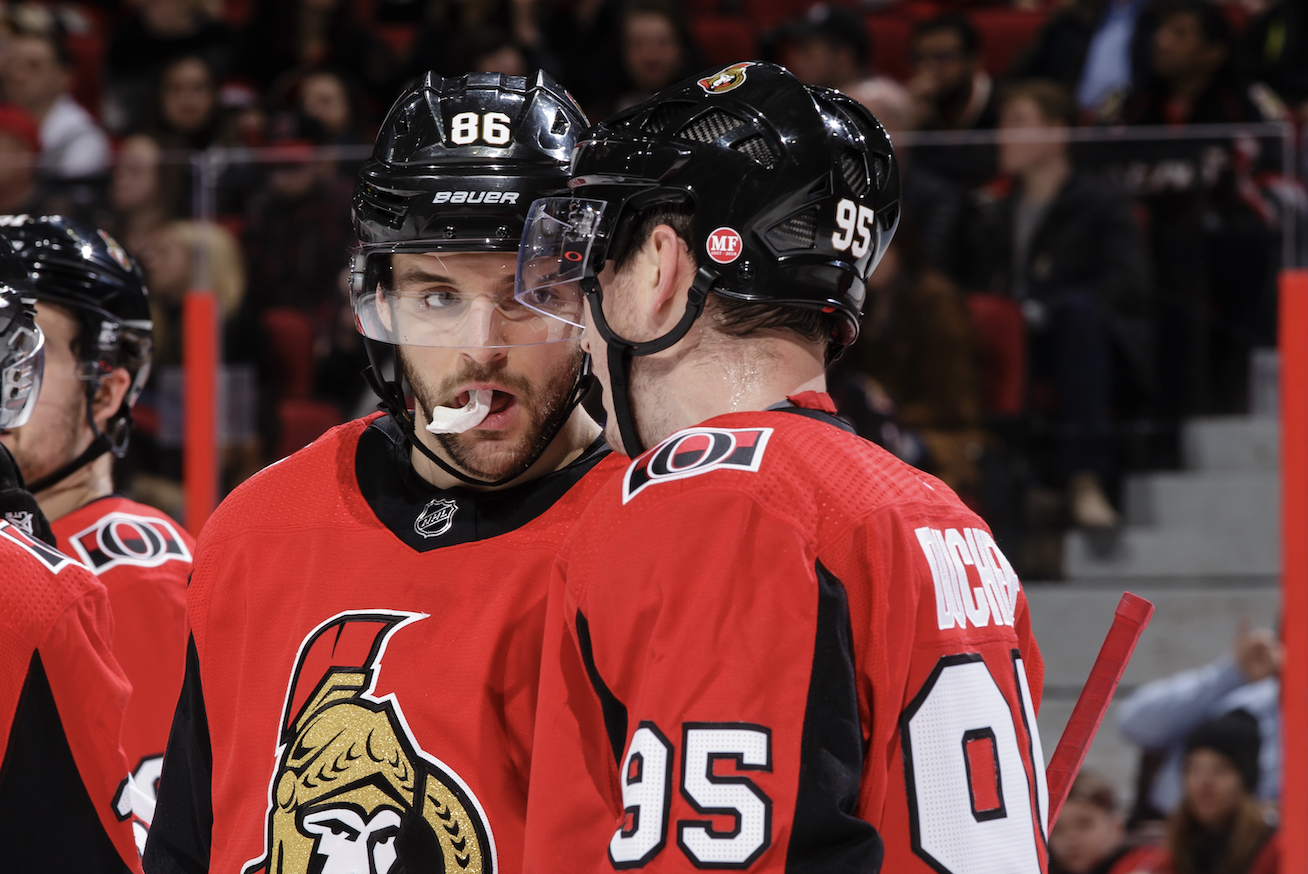 Ottawa Senators’ defenceman Christian Wolanin had been used sparingly in his first two pro seasons. During that time, both Ottawa and Belleville (AHL) employed the former North Dakota star on a timeshare basis.  But this was supposed to be Wolanin’s break out year; the year he’d establish himself as a full-time NHL’er. The hockey gods had other plans. Just a few days before training camp in September, Wolanin got caught up in a battle for a puck during an informal scrimmage. In the midst of the tussle, both his skates came out from under him, resulting in a hard, awkward fall. His right shoulder was badly damaged, smashed between ice and body, and that was it. A torn labrum that required surgery; out for 4 months. The dream of a full-time NHL job would have to wait.

After being taken by Ottawa in the 4th round of the 2015 NHL draft, Wolanin starred for three years at North Dakota, where he helped the school win the 2016 NCAA title. His teammates that year included several elite players who are now in the NHL; players like Brock Boeser, Nick Schmaltz, Troy Stecher and Tucker Poolman. Wolanin’s Fighting Hawks have emerged as a solid training ground for Sens prospects. In the past two years, Ottawa used early picks on Jacob Bernard-Docker, Jonny Tychonick and Shane Pinto, each coming from different Junior A programs and all now teammates at North Dakota. Unsigned Sens prospect Chris Wilkie was also on that 2016 championship team.

In mid-January, Wolanin’s love of school was on full display as was his sense of humour. After four months of rehab and training, he had finally recovered enough to resume skating with the Sens. Instead of wearing the yellow no-contact jersey, he wore North Dakota green, even interrupting a reporter’s question to make sure he knew about it.

“You like the green?” Wolanin asked after his first practice. “Most guys wear yellow, right? But I got a little North Dakota touch in there.” Teammate Drake Batherson was standing at his stall nearby, chuckling at Wolanin’s comment. “Bath likes that,” laughed Wolanin. “He knows how much I love No-Dak!”

If Wolanin seems extra comfortable with his pro hockey surroundings, it comes naturally. His father Craig was drafted third overall in the 1985 NHL draft behind only Wendel Clark and Craig Simpson. Wolanin Sr. played 695 games in the league and took his young family to NHL stops in New Jersey, Quebec, Colorado, Tampa Bay, and Toronto. So the younger Wolanin was fully immersed in hockey and loved the game right away. Craig still laughs about the story of 4 year old Christian ripping his dad’s first NHL goal puck off of a special plaque so he could practice his stick handling.

During his recovery, with time on his hands, Wolanin tried his hand at podcasting. “Walking the Line with Wolly” is believed to be the first podcast ever hosted by a current Ottawa Senator. His friendly, outgoing personality makes him a natural on that platform. “I take pride in trying to be well-spoken and open to the media, the fans, whoever,” Wolanin explained in his first episode. “I have so much downtime so, along with visiting local schools, visiting a homeless shelter, whatever…just to give back. This is something fun. I was a communications major at North Dakota. It’s something I enjoy doing. It’s something I’m passionate about. I think it’s a way to kinda stay relevant in a year that’s been somewhat unfortunate so far.”

His co-host is Graham Creech, who has all kinds of time for Wolanin. “He was a true pro while recording,’ says Creech. “I think his personality on the ice translates into how he approaches anything he does off of it; extremely hard working and confident but also a perfectionist. He’d listen back to each episode and critique himself and ask for pointers on how he could improve. Wolly is a wizard on the ice and in front of a microphone. Make no mistake, we’ve had fun with the podcast but his primary focus was getting back on the ice. It’s great seeing him back with the Senators. Great guy.”

By February 10th, 2020, Wolanin was ready for something more than podcasting and practicing. His shoulder fully healed, Wolanin was now prepared for game action and assigned to Belleville of the AHL. Last season with the B-Sens, he often made it look easy with 31 points in 40 games. But this would be his first action in 10 months, joining in progress a league that was well into mid-season form. It showed in his stats: 1 goal, 0 assists in nine games. But Ottawa came calling anyway.

On March 7th, almost six months after that fluke injury in a random scrimmage, Wolanin’s journey back to the NHL finally ended on a warm afternoon in San Jose (they’re all warm). He suited up against the Sharks and looked solid: a plus-1 with almost 16 minutes of ice time as the Sens won 2-1 in overtime. Wolanin seriously upgrades the Ottawa blueline with his skating and ability to move the puck. But his return also restores balance for head coach D.J. Smith. Smith now has a puck mover on all three defensive pairings which should also allow him to finally dial back Thomas Chabot’s massive ice time to a more comfortable number.

The Senators rebuild appears to be right on schedule and next season they should have a chance to walk the line between lottery team and playoff team. Now that Wolanin’s shoulder has also been rebuilt, and considering all the things he brings to the table, he’s likely to be a key piece of the club’s long-range Stanley Cup construction plans.

@TSNSteve
TwitterFacebookPinterestLinkedInEmail
In this article: