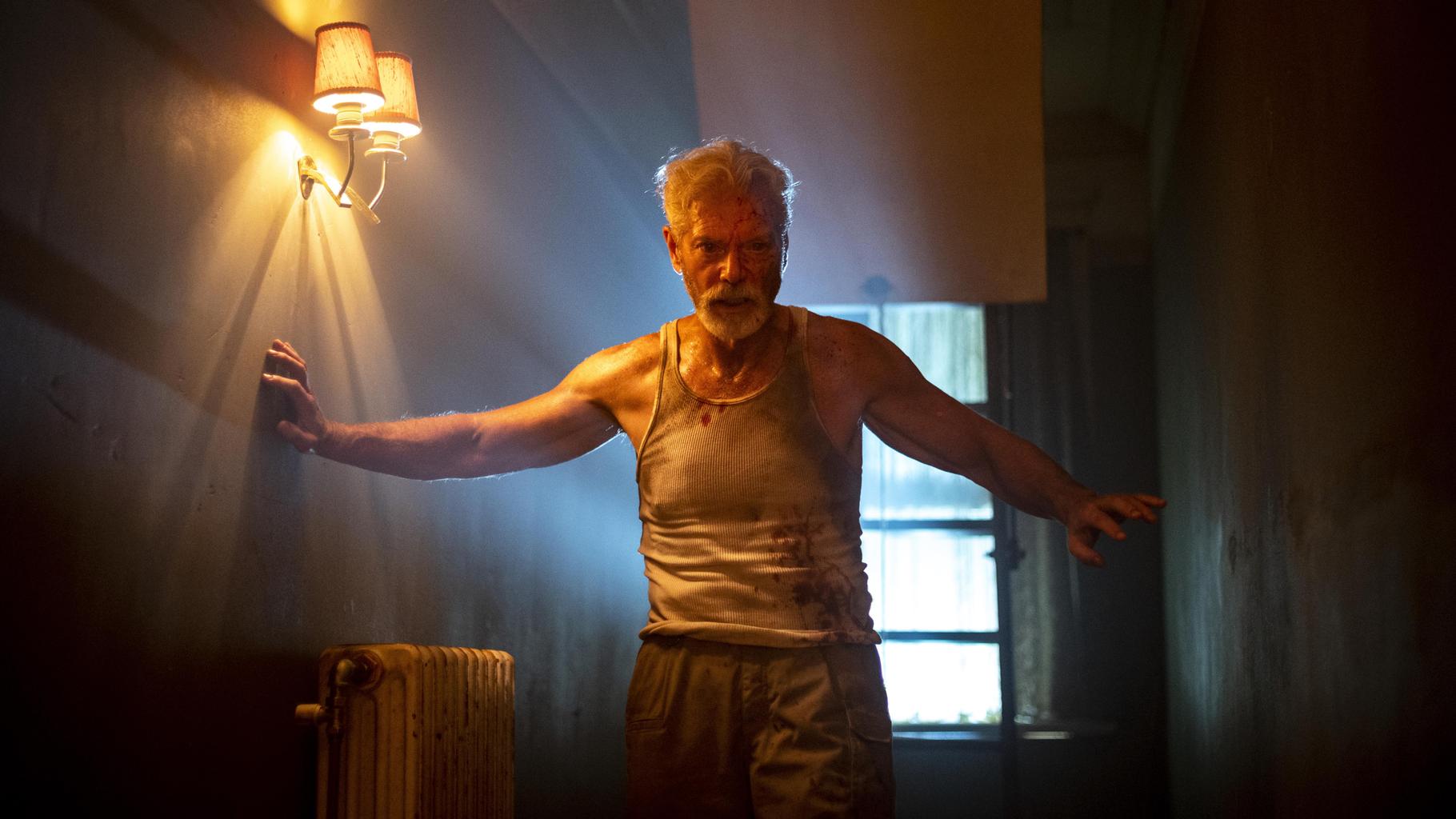 So, is the blind man a misunderstood hero now? Because that certainly wasn’t the idea presented in the last film.

In the first instalment of this thriller series, a group of young adults break into a blind man’s house, only to discover that he is very much a capable killer and kidnapper.  Did they forget about that bit of character development when writing the sequel? Well, maybe it’s because that was one of the more criticized plot points of the first film.

Don’t Breathe, released back in 2016, was met with pretty positive reviews, giving praise to the creepy premise and an outstanding performance from character actor Stephen Lang.

The film followed a trio of petty thieves looking to escape their hometown, littered with white trash and crime. They get a tip that a seemingly frail old blind man has a large stash of cash somewhere in his home. However, they quickly discover that the man is much more dangerous and ruthless than they thought.

Exhibiting inhuman survival tactics, he relentlessly pursues them throughout the house using only his remaining senses. It was the idea of bad people getting their just desserts, so learning that the blind man committed such a horrible crime kind of ruined that dynamic.

So, in Don’t Breathe 2, we’re kind of given what we wanted, except it doesn’t fit the narrative of the first movie. This time around, the Blind Man finally got the daughter he wanted but is a little too protective of her.

He puts her through tiring survival training, doesn’t let her out too much and keeps her isolated from other children. Unfortunately, this turned out to be the right move because the first time he lets her out of his sight, she’s immediately targeted by home invaders.

This forces the Blind Man to spring into action to save his daughter from becoming a pawn in a much larger game.

While granted the Blind Man is not wholly moral in this movie, it can be argued that he does the right thing in an immoral way. So, it is still quite the deviation from what we’re used to from this character. With that said, this can still be an entertaining thriller.

Stephan Lang still shines in this role, showing the emotional turmoil of the character and the physical capabilities. Lang was just south of 70 years of age when shooting this film, and the stunts and fight scenes he has to act through are downright impressive.

We also get a pretty engaging villain in Brendan Sexton III as Raylan, the leader of a drug gang. Every time this guy’s on-screen, you’re constantly underestimating his intentions, making it very difficult to figure out his endgame. He’s one of the most compelling aspects of the film.

Madelyn Grace as Phoenix, the Blind Man’s daughter, manages to give a good performance despite the script not really giving her much to work with. The movie builds up the idea that she’ll do more in the climax with all her survival training.

Unfortunately, her whole role in the film just boils down to damsel in distress. She constantly goes from one set piece to another where she needs to be rescued, and it can get a little boring by the third act.

So, all in all, Don’t Breathe 2 is a mixed bag, to say the least. While not as pulse-pounding as the previous entry, it still offers some fun action and suspense to keep audiences satisfied… just forget everything you learned about the Blind Man in the last movie, and you’ll be fine.