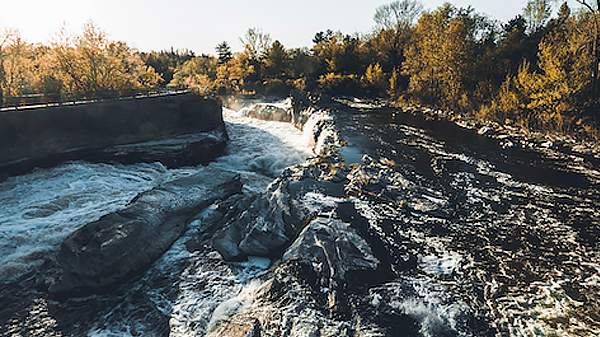 Looking for your next day trip in Ottawa? Head to Hog’s Back Falls, a park just north of Mooney’s Bay with an incredible view of a series of 60ft waterfalls.

The falls mark the point where the Rideau Canal splits from the Rideau River. During the construction of the Canal, Lt. Colonel John By designed a large damn to help divert the water into the artificial canal that leads to the Rideau Locks. The damn also helps to flood a series of rapids, some at Hog’s Back that can still be seen today, and some just a bit upstream at Mooney’s Bay.

The falls were originally named Prince of Walls Falls, but this name is rarely used today. Instead, Hog’s Back is the name given to the falls and the surrounding park facilities, which includes a large pavilion, walking trails, picnic tables and washrooms. The park has free parking from 7 am to 10pm, when the park is closed.

Hog’s Back Falls makes for a beautiful afternoon of exploring and picnicking beside the cascading waterfalls, and is a must-see for anyone who hasn’t been.