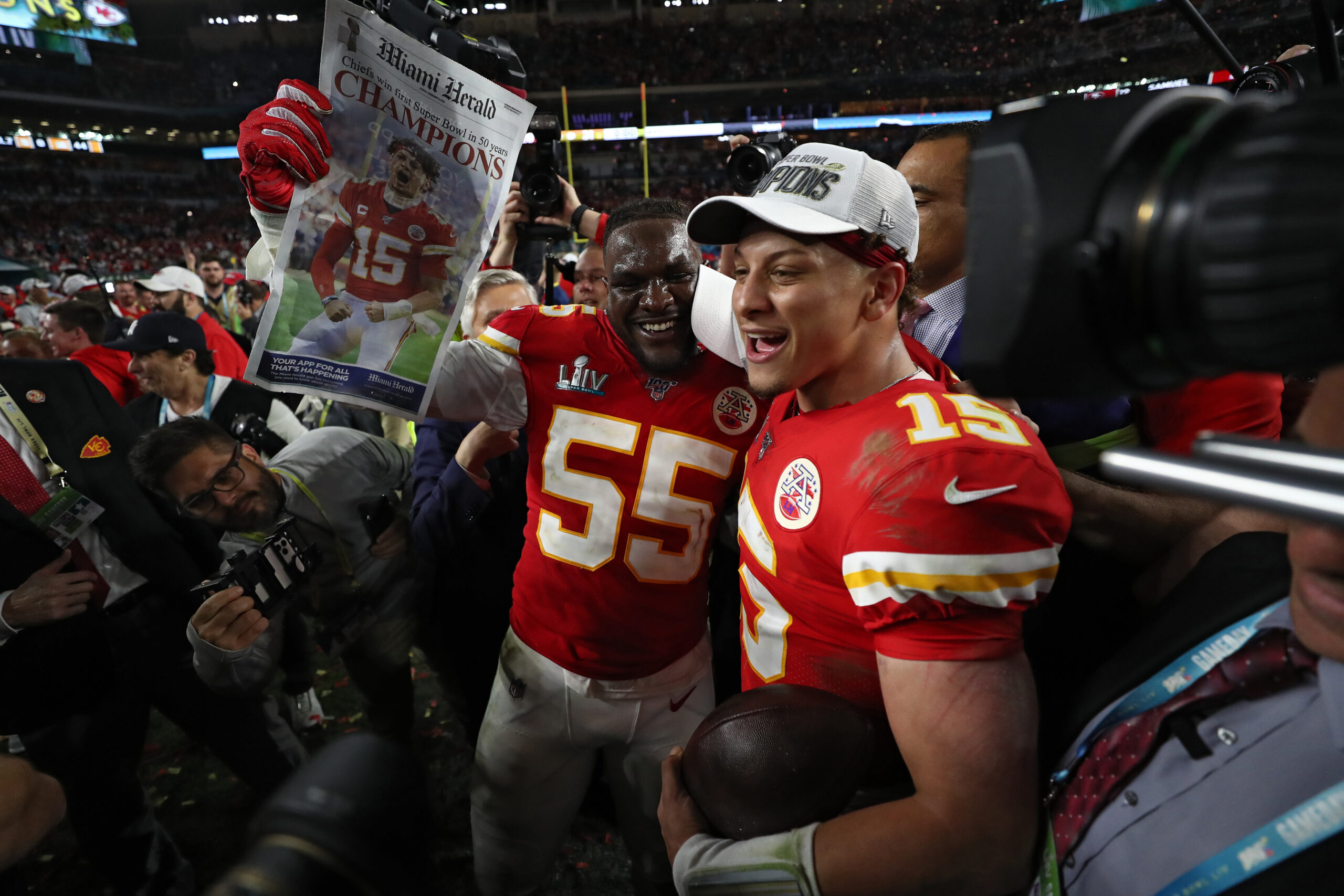 Patrick Mahomes and the Kansas City Chiefs have been down and (seemingly) out before. In fact, they seem to be quite comfortable with it. With a team as explosive and well coached as the Chiefs though, they have shown us that they are never truly out of a game – even if that game is the Super Bowl. Kansas City overcame a 10-point deficit to beat the San Francisco 49ers in Super Bowl LIV in Miami. The Lombardi Trophy is returning to Kansas City, Missouri for the first time in 50 years.

The story of the 2019 Chiefs will be that of poised play and comeback performances. Kansas City overcame double-digit deficits in all three of their playoff games, the first team in NFL history to do so.

The 49ers were rolling in the fourth quarter with 17 unanswered points and the usually otherworldly Patrick Mahomes looked uncharacteristically shaken. He threw two aberrant interceptions in what looked to be the worst performance of his young career. San Francisco was on their way to a Super Bowl victory, but fell apart on both offence and defence.

The Chiefs were down 10 and faced a third and long with seven minutes remaining. The game felt on the verge of swinging permanently out of reach for the Chiefs but Mahomes stepped up in the pocket and hit his wide receiver Tyreek Hill on a 44-yard pass deep into 49er territory.

Mahomes cashed in with a touchdown pass to tight end Travis Kelce, cutting the San Francisco lead to three. Kansas City subsequently forced a short 49er drive and then found the endzone again on their next offensive possession, this time on a five-yard touchdown pass from Mahomes to running back Damien Williams.

After his second interception, Mahomes completed 8/13 passes for 114 yards and two touchdowns. He was named the game’s Most Valuable Player (MVP) and is only the second player ever to win MVP and Super Bowl MVP in his first three NFL seasons, joining hall of famer Kurt Warner.

On the other side, the 49ers had plenty of bright moments and the game in the palm of their hands, even after the Chief comeback.

49er quarterback Jimmy Garopollo missed a wide-open Emmanuel Sanders on a deep throw that would have given the 49ers the go-ahead touchdown with under two minutes remaining. San Francisco turned the ball over on downs on the next play, all but effectively ending the game.

San Francisco Head Coach Kyle Shanahan will take heat in NFL fan and analyst circles for his clock management in the fourth quarter – as he did following his Super Bowl LI defeat when he was offensive coordinator of an Atlanta Falcon team that blew a 28-3 lead to the New England Patriots. But the reason the 49ers lost is clear: the San Francisco defence could not stop the Chiefs and their offence could not complete a pass when it really mattered.

Kansas City head coach Andy Reid finished his 20th season as an NFL head coach and finally got over the hump with his first Super Bowl victory. Against a formidable 49er defence, who notched four sacks along with two interceptions, Reid called a great game and utilized his many talented offensive weapons.

The Chiefs knew they had favourable matchups with their two best pass-catchers, Travis Kelce and Tyreek Hill, and Reid moved them around the offence throughout the game to get open looks for Mahomes. Quick passes to Hill, Kelce and others helped neutralize the 49er pass rush and open up longer passing plays when needed later on.

The 49ers’ system is built on a complex running game that utilizes its speedy receivers on the outside in addition to a stable of talented halfbacks. And that is how the game played out early on, with wideout Deebo Samuel playing a role on runs that stretched the Chief defence thin on the outside. It was 10-10 by the time Jennifer Lopez and Shakira took the stage for the halftime show, followed by a strong San Francisco third quarter and even stronger Kansas City fourth.

Mahomes rained fire on the NFL last year but came up short against the Patriots in overtime in the AFC Championship Game, one step away from the Super Bowl. He suffered a dislocated hip this season during a Thursday night win over the Broncos in mid-October. Mahomes missed the following two games and the NFL world’s collective focus moved on to newer and fresher headlines, including the MVP campaign of Baltimore’s Lamar Jackson.

Lurking just beneath the surface however was the NFL’s most talented passer, paired with one of the most creative offensive coaches of the millennium. Mahomes and Reid is a football marriage made in heaven and their playoff performances are proof of that.

Through two full seasons as a starting NFL quarterback, Patrick Mahomes has a regular season MVP, a Super Bowl title, Super Bowl MVP, and has still yet to lose a single game by more than seven points. The quarterback was somewhat of a mystery when he came into the league three years ago. Now after a stretch that is borderline unmatched in the history of football, Mahomes has brought a long-awaited title to a starved fan base and has positioned himself to be the face of football for years to come.