Who says that Christmas movies have to spread love and happiness through seasonal joy? Sometimes, these movies need to indulge on the darkness that this holiday can bring onto all of us. The darkness of ignorance and greed.

Fatman, starring Mel Gibson as jolly Chris Cringle himself, gives a lump of coal to the wrong kid on the naughty list. In a fit of revenge, the kid hires a hitman (played by Walton Goggins) to “take care” of the Fatman. While not your most conventional holiday flick, the movie does offer some intriguing commentary on how peoples’ greed throughout the season and how our obsession with material items outweighs personal relationships.

But before you rent/buy this movie on VOD or Prime Video, check out these interesting facts about the film.

It was filmed locally

Throughout the winter of 2019/2020, Mel Gibson was filming throughout the Ottawa Valley area, even going to small-time locations like Chesterville of the North Dundas area. Other local locations filmed for the movie includes Mississippi Mills, Carleton Place and West Carleton-March Ward in Ottawa.

In a certain scene, where the Skinny Man (played by Walton Goggins) receives a phone call outside a building, you can tell it’s the Diefenbunker Museum. If you keep an eye out, you might find a few noticeable landmarks.

The script was written 14 years ago

Believe it or not, directing and writing brothers Ian and Eshom Nelms wrote the script to Fatman 14 years ago. That’s right, all the way back in 2006. But why did it take so long to get onto the big screen, or small screen in this case?

Raunchy and violent black comedies were not as popular back then as they are today. Most people who read the script thought it was too crazy or violent to put any money towards. Other movies needed to be made in order to pave the way for Fatman. Movies like Krampus, The Night Before, A Very Harold And Kumar 3D Christmas and even the Billy Bob Thorton classic Bad Santa needed to be made in order to ensure that audiences would watch a Santa Claus movie like this.

Granted, with what we know now about Mel Gibson, him playing a violent Chris Kringle with a bad attitude might seem like perfect casting. However, back when the Nelms brothers wrote the script, Mel Gibson was even on their radar.

Their original choice was actually Jack Nicholson, who was known for his crazy roles from The Shining and Batman. However, in 2016, when they saw Gibson in a Q&A for Hacksaw Ridge, they noticed his gruff-looking beard and exhausted but passionate demeanor and thought, “That’s our Chris Cringle.”

The Nelms Brothers saw Chris Kringle as a superhero

Superheroes have been a stable in our popular culture since Superman lifted that car back in the 1930s, and with the Marvel Cinematic Universe, that popularity has skyrocketed. So, when writing the character of Chris Cringle, the brothers actually took inspiration from a particularly violent vigilante.

“We love comic books. One of our favorite mainstream characters is The Punisher. His comics hit the right buttons for us,” they said in an interview with ComicBookMovie.com.

“Fatman” came to life because of a “Small Town Crime?”

No, crime had nothing to do with the creation of this movie. Small Town Crime was a 2017 film that became a hit at the South by Southwest Film Festival. After years of having their scripted turned down for it’s offbeat nature, Small Town Crime showed the film industry what kind of tone the Nelms brothers would bring to a crime caper.

The cast, including Octavia Spencer who’s a friend from their early Hollywood days, backed the brothers in the tone their script.

“That one popped. That was the one that was our tone in the crime thriller sort of dark comedy we were going for,” they said in an interview with Los Angeles Daily News. “That’s what opened the door to get to ‘Fatman.’” 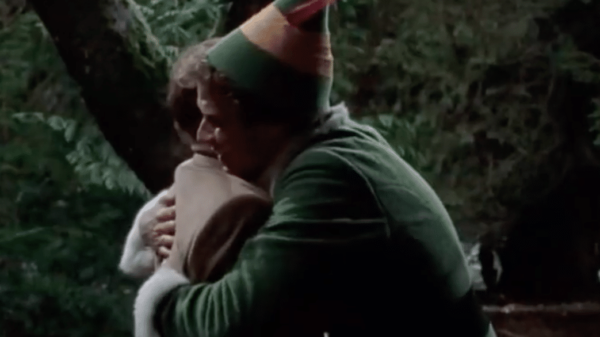 In a two-part Netflix special, Season 1 of The Movies That Made Us talks with the creative minds behind two of Christmas’s most iconic...