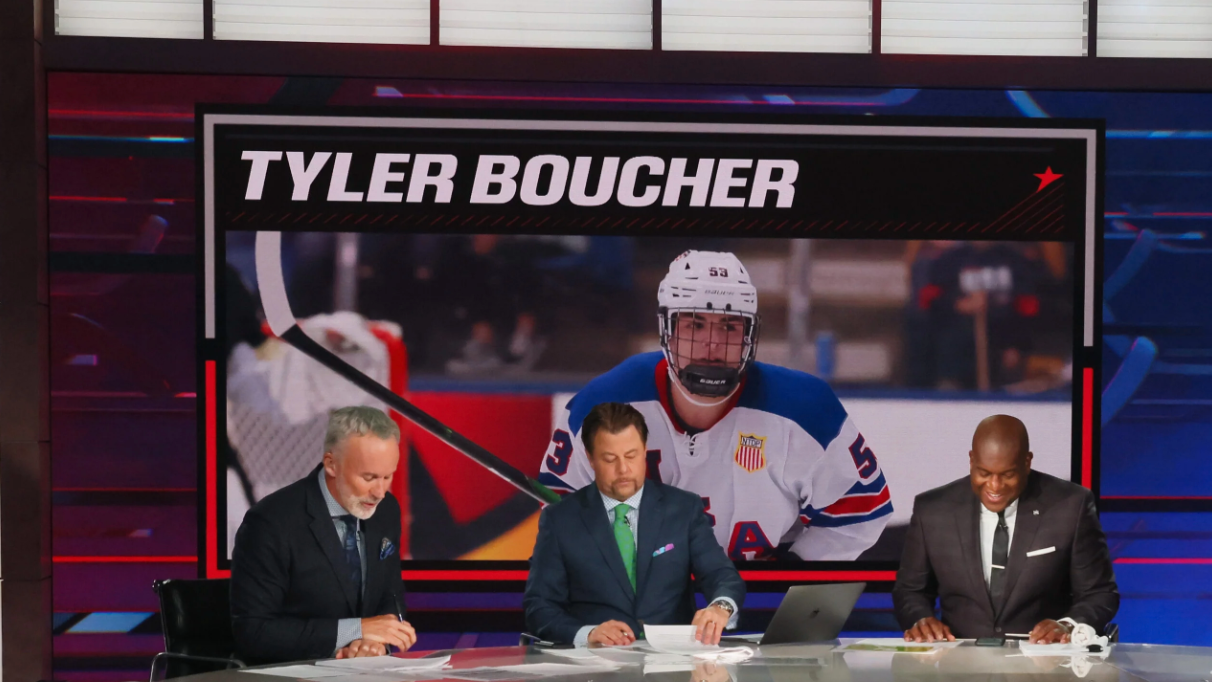 If you’re a talented, young hockey player with good size, played for Team USA and have a Dad who played in the NHL, chances are you’ll be hearing from the Ottawa Senators.

The Sens went out and selected another player just like that over the weekend, taking Tyler Boucher 10th overall in the NHL draft. Boucher hails from the U.S. National Team Development Program and will probably be counted on to help lead the American squad at this year’s World Junior Hockey Championship.

While no one doubts that Boucher is an excellent prospect, what raised eyebrows in the hockey community was how early the Senators went after him. He was the actual 10th pick but was only ranked 29th by TSN’s Bob McKenzie, 49th by TSN’s Craig Button, and 63rd by McKeen’s Hockey.

But the Senators were working off their own draft list all through this year’s draft, marching to the beat of their own drum, believing if Boucher had been able to play more hockey this season, he would have shot up everyone’s draft rankings.

“It was a pretty tough year for me, admitted Boucher. “I think I played a total of 12 games. I had COVID earlier in the year and then I came back and sprained my MCL (knee). And then I tore a little bit of my meniscus (knee again). It was definitely a tough year. A lot of ups and downs. I think I learned a lot from it, though. I feel great. My knee’s 100 per cent and I’ve been back on the ice for a while and in the weight room.”

Boucher is the son of former goalie Brian Boucher who played 16 years in the NHL. The senior Boucher tipped off his son about Ottawa at his draft night gathering, sitting a few seats away from him. Until that moment, Tyler didn’t know who would select him or when.

“We were at the table and I honestly had no idea,” said Tyler. “My Dad winked at me and I was kinda confused. And then (the Senators) said my name and just kinda blacked out from there.”

It wouldn’t be a surprise if new Senators’ executive Pierre McGuire flipped Boucher an early text of congratulations. Until recently, the two were co-workers on the NHL on NBC. Boucher was certainly a proud Dad on draft night.

“I’m thrilled,” said Brian. “A heck of a day for Tyler. Really proud of him. He had a really tough year. He battled through it and stayed positive. I think everybody eventually playing hockey, they’re going to face adversity. You just don’t know when it’s going to come and, for him, it came this year in an important year. He stayed with it and he’s rewarded for it (on draft day). Ottawa’s a very good team that’s on the ascent and hopefully he’ll be a big part of that.”

One of the first questions Boucher fielded from the Ottawa media was, “Why didn’t you choose to play goalie like your Dad?”

“I don’t think my Mom could handle that one again,” Tyler laughed. “I think she had enough trauma with my Dad (when he played). She couldn’t go through that again. I think she wanted a fresh start and maybe a different route for me.”

Billeting with three-time Stanley Cup winner Chris Osgood and his family, Boucher got into 12 games this year for Team USA’s U18 team, scoring 11 points and putting up 22 penalty minutes. EliteProspects.com described him this way: “No player is more physical in this year’s NHL draft class. His physical game is insane. He’s also a crafty shooter, shooting under defenders’ sticks or changing the angle.

Boucher says he’s pumped about being an Ottawa Senator.

“It’s a great organization. I used to love watching them when Erik Karlsson was there back in the day. I think it’s a great spot. I think they have great fans. Playing hockey in Canada is really cool and special, something I haven’t gotten to experience and something I’m really looking forward to.”

“We’re very happy to make the selection of Tyler Boucher,” Sens GM Pierre Dorion said in a club statement. “For us, he’s a power forward. He’s a guy with great speed and uses his body. One of the things he does well is his ability to finish and score goals from outside the dots but also close to the net and inside the paint.

“I had the opportunity to watch three of his games, obviously on video this year, and I was thoroughly impressed,” Dorion said. “He never took a shift off and was always moving his feet and was always involved. What impressed me the most was that when he had the puck you saw that he had a knack to go to the net and try and score.”

Many analysts scoffed at the selection, speaking with ignorance, and believing the Senators missed out on a chance to trade down in the draft, to pick up another asset, and then get Boucher later on in the draft anyway. In an interview on TSN 1200 radio, Dorion shot that notion down hard.

“We had pretty good intel,” said Dorion. “Let’s say we selected another player (10th overall). Boucher wouldn’t have been there very much after our pick.”

“I just gotta go to college and see where it takes me. Whatever (the Sens) want me to do, whatever they need me to do is what I’m going to do. Whenever they feel that I’m ready is when I’ll come in and try to make that team and make an impact.”

That will probably happen – much like the way Boucher was drafted – a lot sooner than people think.