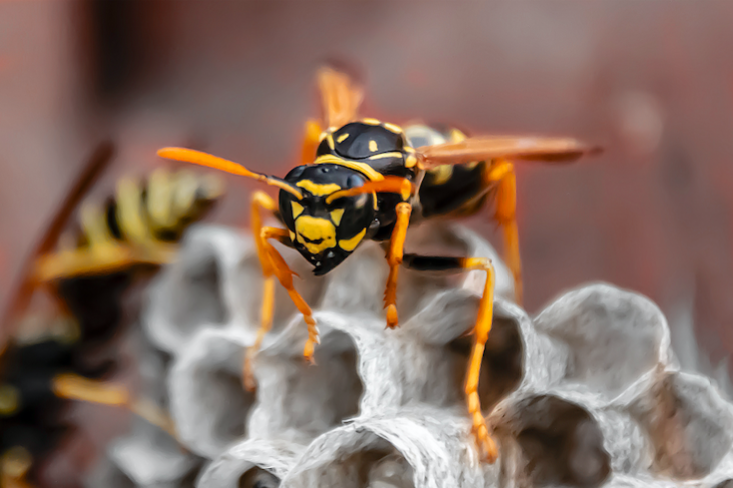 It doesn’t matter how brave and tough you think you are, everyone gets a little nervous when a wasp or hornet buzzes around them, and how can you not? It can be pretty safe to assume that you don’t want to see a nest of these little creatines flying around where you and the family relax on a hot, summer day.

The average hornet’s nest holds anywhere from 100-700 hornets inside. It can be a pretty daunting and dangerous task to remove a nest for this reason. Here’s what you need to know.

How Do You Know There’s A Nest Nearby? How Can You Tell It’s Active?

A good indicator that you have a wasp or hornet’s nest close by is the increased number of them buzzing around your property. A couple is fine but when you notice more than a few, possibly close to a dozen at a time flying around, you may have some new neighbors nearby.

It’s best to check all around the property for any sign of nest that could be lurking around. You can find them in a number of places including trees, the siding of your house and even in the ground. Most of these nests have a papery appearance, almost looking like leaves or rice paper. You’ll be able to tell it’s active or not quite easily because active nests usually have a lot of traffic going in and out.

If it doesn’t look like there’s a lot going on, it’s probably been abandoned and then it’s harmless because wasps and hornets never return to old nests after the season is done.

How Do You Remove A Nest Safely?

The first thing to know about safely removing a hornet’s nest from your property is that it should be done at night. Hornets and wasps are much more active in the daytime and if you threaten the safety of their home, you will be attacked and most likely stung. Hornets and wasps are also unable to see in the dark, so you’ll literally blindside them by attacking at night.

So, you should first plan out how you’re going to approach this. First thing you should keep in mind is to leave all light sources inside because they will attack the first thing they see if attacked out of instinct. There are also a few ways to take down the nest.

First, you can use some hornet/wasp repellent to spray all over the nest (and inside the nest if safety precautions have been taken). If you spray sufficiently enough, you’ll be able to tear down the nest with ease and bag it. Another option is to use a power or steamlike spray to shoot at the nest. This will break open the nest and drown most of the insects inside. However, it’d be highly advisable to make a hasty departure afterwards in case some hornets or wasps manage to survive the encounter.

The last and safest option to take is using dust or powder to remove them. You can apply these products to the nest that will weaken their colony. This option takes longer to take effect but you’ll find, when done right, it could be the safest option apart from simply hiring a professional.

What NOT To Do When Removing A Wasp

Since we’ve gone into great detail on how to remove a nest safely, it’s probably best to go over what you should definitely not do. Even though they might be considered obvious, but these are still very common occurrences to this day when removing these nests.

First, you should never, under any circumstances, use fire to remove a wasp/hornet’s nest. Fire is very unpredictable and can spread farther than you imagined. Also, these nests are made of a papery substance that is extremely flammable, which can make the possibly of spreading the fire to your property greater but can also cause you bodily harm. Lastly, fire is usually not capable of killing all the insects in the nest, leading them to become more aggressive towards you and other humans in the area.

Another method that should be avoided when removing a nest is using a baseball bat or similar blunt object. Obviously, whacking a nest, especially a yellowjacket wasps nest, can be very dangerous because, the colony will attack you much faster than you realize. Wasps will attack in large groups, clinging to you and stinging you multiple times. In some cases, you might even be attacked before the first swing.

How Can You Prevent These Nests From Popping Up Around Your Property?

After taking down the wasp and hornet’s nest, you’ll probably want to prevent them from coming back later in the season or next year. Well, first, you’ll want remove any sources of food from your porch, balcony or patio, especially those with high sugar. Second, keep your property clean and tidy. That includes picking up any trash you see around the area and properly sealing garbage cans and compost piles.

Next, check around the property for any cracks, trees, or holes in the ground where wasps and hornets can call home. You’ll want to cover these areas up with dirt or sealant. You keep on this with a regular schedule, your chances of being bothered by wasps and hornets will greatly decrease.

Another strategy you can try is spraying peppermint oil around your property, which has been shown to be effective in repelling wasps.

You can also set up traps around your property. These can be purchased but you can also make one yourself to save money. All you have to do is cut the top part of a two-litre bottle or cutting a small hole in the top and fill it with sugar water or some other tempting treat. However, it’s important to note that this is not usually a permanent solution and it’ll just reduce the amount of wasps passing through your yard rather than residing.